Five media organisations, including RTÉ, had challenged the judge’s decision that the man’s name or occupation were not to be published https://t.co/lfFkv94fGT

A judge has refused to lift an order she imposed preventing the media from identifying a public servant charged with falsely imprisoning and sexually assaulting a woman at his workplace last year.

The Director of Public Prosecutions agreed that there was no legal basis for the imposition of reporting restrictions.

The judge Treasa Kelly, however, said this afternoon that she “had some bit of a look” at the case and the legislation during lunchtime, but said she was “not satisfied it is quite as straightforward“.

Judge Kelly said defence solicitor Martin Moran had asked for time to “give him a chance to put in submissions on behalf of his client” and she said she was going to give him time.

However, the book of evidence was also served on the accused, so the case has now been sent forward to the higher Dublin Circuit Criminal Court for trial.

Judge Kelly said that this meant that she will no longer have any involvement in the case and the “obvious thing” is that “the circuit court deal with it“.

She said she had a look at the matter “over lunch“ but she had not given it “a huge look” and “haven’t resolved the issue in my head“.

Judge Kelly also said she was “not in a position to make a decision” on the reporting restrictions she had imposed and it was up to the media “to take the matter elsewhere“.

The case has now been sent forward to the Dublin Circuit Criminal Court.

YOU be the judge. 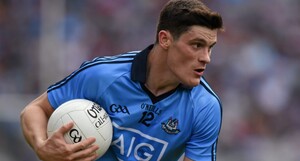 District Court judge Patrick Clyne made the ruling as he said Mr Connolly had “done all that had been asked of him through a serious of restorative justice measures”.

Will the Director of Public Prosecutions (DPP) challenge Judge Patrick Clyne’s generous strike out given the fact that judges have huge discretionary power, in particular where there are extenuating circumstances “of a special character”?

Lucky Bounce Of The Ball For All Star Attacker (Dearbhail McDonald, Independent.ie)

1/2 Proof that Tony Soprano was not gunned down with his family at the end of the series. A Drunken man verbally abusing Gardai in Tralee..

2/2 was ordered to pay €750 to court poor box.Took gardai and several bouncers to subdue him. When asked his name he replied Tony Soprano