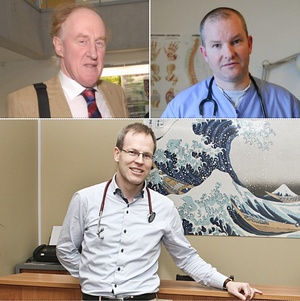 Dr Martin Feeley was forced to resign from Dublin Midlands Hospital Group after criticising Ireland’s ‘Draconian’ response to the pandemic. 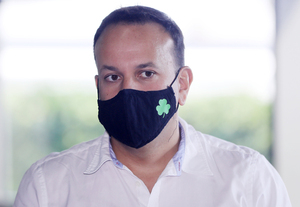 Tánaiste Leo Varadkar (above) was asked about Dr Martin Feeley’s article in today’s Irish Times (see below) and if he thought there was “anything in that”.

Common sense might dictate that we expose the low-risk population to this condition and protect the at-risk, i.e, the red rag of “herd immunity”. That is what was happening and yet the policy seems to be to prevent this happening. This should particularly have been allowed to happen during the summer months before the “flu season” and thus reduce the workload on the health services during winter months.

…The at-risk can be protected by themselves and others adhering to proven protective measures…The young and healthy majority need to be allowed to live rather than exist, while being mindful of those at risk.

Dr Feeley stood down from his position as clinical director of Dublin Midlands Hospital Group last week with immediate effect, after the HSE “dissociated itself from his remarks” that Covid-19 is “much less severe” than the flu for most people and that restrictions were no longer justified.

Mr Varadkar told Ms Byrne that he disagreed with Dr Feeley’s views on young people and Covid-19 but he also said he didn’t agree with dismissing experts with alternative views.

“I don’t agree with what he’s saying. But I never think we should dismiss alternative views or certainly views that come from people of expertise because this is a new virus, it’s only around nine months. There’s a lot we still have to learn about it.

“Ronan Glynn, the Acting Chief Medical Officer, always says that anyone who speaks with certainty on coronavirus is doing so out of confidence not out of knowledge because there is so much we have yet to know or learn about the virus. 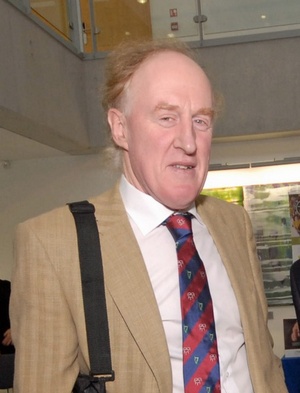 Dr Martin Feeley, who was forced to resign from Dublin Midlands Hospital Group after criticising Ireland’s ‘Draconian’ response to the rona, has responded to the controversy.

In view of recent controversies caused by an article in The Irish Times on Saturday, September 12, I think it is important to articulate my position on the present Covid crisis and its management, and to comment also on more recent developments

Up to August 10th, the number of Europeans who died from a Covid-19 illness (182,639) was slightly above the number who died three years ago as a result of “flu” (152,000). The number of patients who died in Europe from the 1917/18 Spanish flu was approximately 2.64 million – this would be equivalent to approximately 7.4 million deaths of today’s European population.

It is not for want of good reason that deaths are now referred to as Covid-19-associated deaths. Of 5,700 patients admitted to New York hospitals, 88 per cent had more than one underlying condition (co-morbidity) and the US Centres for Disease Control and Prevention reported that from January to May, 19.5 per cent of Covid-19 patients with co-morbidity died compared to 1.6 per cent with no other illness.

The Irish experience is very similar – up to mid-August 94 per cent of deaths were in patients with underlying medical conditions. A Stanford-led group analysed over 100,000 Covid-19-related deaths in Europe, including Ireland, and the US and concluded that “deaths for people under 65 without predisposing conditions were remarkably uncommon”.

Who is at risk?

For most respiratory diseases, such as the common cold and influenza, children are the primary carriers. However, this does not appear to be the case with the Corona viruses which caused SARS in 2003 and Covid-19. Six weeks after opening schools in Denmark there was no evidence of a spike in cases. A University of Southampton review found no reported incident of pupil-to-teacher transmission.

While children are at negligible risk if healthy and not obese, conversely the individuals at the opposite end of the age spectrum are at greatest risk. The case mortality rate regardless of co-morbidities at 60 years is about 1 per cent, at 70 years about 2 per cent, and increases dramatically to above 15 per cent in individuals over 80 years.

The presence of a chronic illness is the all-important factor in determining the risk even in the elderly; up to mid-September approximately 6,000 nursing home residents had tested positive for Covid-19 and 83 per cent recovered. Diseases of the cardiovascular and respiratory systems are high risk; as is diabetes mellitus, although distinguishing its risk from the obesity risk is difficult.

The best kept secret regarding Covid-19 is the vulnerability of overweight individuals. For reasons unknown this is not publicised to the degree required. Unfortunately this lack of awareness is exacerbated, if not caused, by HSE-published data on risk factors. In its definition of obesity the HSE uses a body mass index (BMI) of 40 whereas most international literature uses a BMI of 30. 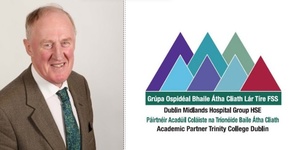 Dr Martin Feeley’s views that coronavirus is “much less severe” than the flu for most people and that restrictions were no longer justified caused a furore after they were reported in The Irish Times last weekend.

The HSE actively dissociated itself from his remarks and rejected his suggestion that young people should be allowed to get the virus to develop herd immunity.

Dr Feeley (70) stepped down from his post as clinical director of Dublin Midlands Hospital Group on Tuesday with immediate effect.

After his public comments, he came under heavy pressure from HSE management, who told him his position was untenable.

A doctor for more than 45 years and an employee of the health service for 30 years, Dr Feeley says he stands by his comments, but decided to resign so management in his hospital group would not be penalised.

Let Dr Feeley and De Brun be a lesson to all you other mouthy medics.

Previously: Doctor In The House

Dr Martin Feely forced to resign by the HSE for expressing on opinion. On the same day, the HSE are telling us its fine to go to Sweden and Germany, the 2 countries who practiced the exact policy Feeley is advocating.https://t.co/O4AZJgTVkX pic.twitter.com/0Hq4qfeY5Z