A helpful illustrated guide from The Art Of Manliness, what sez:

Back in the days of the ancient Near East, both men and women wore flowing tunics. Around the tunic, they’d wear a belt or girdle. While tunics were comfortable and breezy, the hem of the tunic would often get in the way when a man was fighting or performing hard labor. So when ancient Hebrew men had to battle the Philistines, the men would lift the hem of their tunic up and tuck it into their girdle or tie it in a knot to keep it off the ground. The effect basically created a pair of shorts that provided more freedom of movement. Thus to tell someone to “gird up their loins” was to tell them to get ready for hard work or battle. It was the ancient way of saying “man up!” 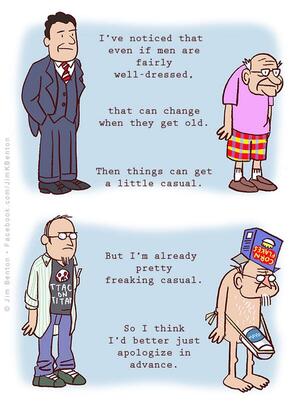 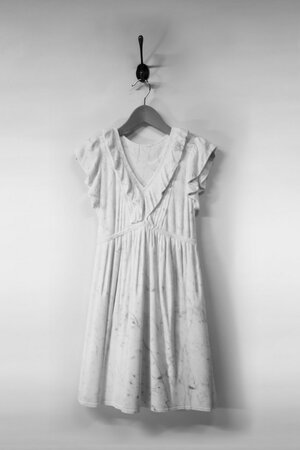 The Identity Collection: dresses donated by friends and then hewn from blocks of Carrera marble (from which Michaelangelo carved his David) by Scottish sculptor Alasdair Thompson.

Teacher Dale Irby from Dallas has worn the same shirt and brown geansaí in yearbook photos for all 40 years of his career. What started by accident became a running joke. A very long running joke.

A sports teacher, Irby usually wore athletic clothes suitable for exercise. He picked the vest and shirt combination in order to look presentable for his first yearbook photo in 1973 and accidentally repeated the outfit the following year. “I was so embarrassed when I got the school pictures back that second year and realised I had worn the very same thing as the first year,” he told the Dallas Morning News. Irby’s wife, Cathy dared him to repeat the outfit for a third year. In the spirit of one-upmanship Irby continued the joke for a further five years, after which he thought “why stop?”

Exactly the sort of can-do attitude the modern internetz need. Dresses made from food by Korean fine artist Yeonju Sung. Best designer’s name ever. Spotted at an undisclosed fashion location in Cork.