The Irish Small and Medium Enterprises Association (ISME) has joined calls for employers to be allowed ask if their employees are vaccinated.

“It is very hard to see how employers cannot ask a vaccination status either where it is not possible to maintain social distancing between employees or between workplace colleagues and the customer.

“It’s very difficult to conclude how the employer would be doing anything other than acting irresponsibly if they did not know the vaccination status of the employee.

“We would be very disappointed if people were to use the word discrimination. It’s now incumbent on the Department of Enterprise to specify work where an employer should know the vaccination status of employees

However, The Data Protection Officer said this was…

“… likely to represent unnecessary and excessive data collection for which no clear legal basis exists”.

“In this country we have very strong rights, and people still have the right to make their own decision.

“And if all employers are allowed to ask for a vaccination status and make decisions based on that status including potentially not allowing people to come back to work or potentially firing people, you’re potentially talking about introducing a mandatory vaccination programme by the back door.

“That potentially impacts the right to bodily integrity, the right not to be discriminated against, and of course the right to privacy.

“If you have employers making decisions on the basis of vaccination status, you are potentially talking about discrimination or segregation in workplaces.”

ISME: Employers want to know if workers are vaccinated (RTÉ) 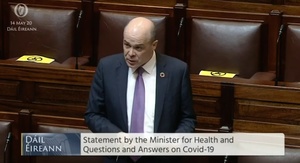 “We have had reports of employers receiving results in respect of individual patients, that’s a breach of confidentiality. Full stop.”

It followed claims about the practice made in the Dáil last week by Independent TD Denis Naughten while he was asking the Minister for Health Simon Harris about Covid-19 infection rates at meat plants.

During his contribution, Mr Naughten said:

“It has happened in a number of instances across the country.”

At the time, Mr Harris told the Dáil that he couldn’t speak to the claims because he didn’t know any details about Mr Naughten’s claims.

Yesterday morning, RTÉ’s Fran McNulty reported that Mr Naughten’s claims had since been confirmed in a letter the TD received from the minister. He also reported that the Data Protection Commissioner said such a practice was not legitimate.

Later in the afternoon, CEO of the HSE Paul Reid addressed the committee and he was also asked about the practice. Mr Reid said “there is one case that we know of”.

He had this exchange with Sinn Féin TD Matt Carthy:

Paul Reid: “There is one case that we know of where the employer was notified of a significant number of positive cases and that is at the discretion of the public health official and the judgment he or she makes…”

Matt Carthy: “Does Mr Reid agree with what Dr Holohan said earlier on? I think his words were that this practice would clearly breach patient confidentiality. Does Mr Reid not agree with that?”

Reid: “The way we want to do this is directly through the GP and the individual. That is the route we have taken throughout this process.”

Carthy: “We are in a pandemic. Does that mean that the derogation, as defined, applies to anybody?”

Reid: “No, it would not because throughout the vast ultimate majority of all of the cases we have tested the result is communicated back through the GP to the individual. That is our process. That is the way it works.

Carthy: “Does Mr Reid stand over the position whereby, in some instances, employers are informed about their workers’ health before the workers themselves?”

Carthy: “Are you going to work to stop it then?”

Last night the HSE announced that the practice of informing employers about employees’ test results would be suspended.

In addition, Mr Naughten also tweeted about the unfolding story after Mr Reid said he was aware of one case…

HSE backs down on disclosure of medical data but still no answer why practice occurred – https://t.co/OU66aDhRbk https://t.co/UxZpg0U5tq

Previously: The Last To Know

Finding Out In The Worst Way Pat Byrne (above), chief executive of aviation software specialist Rainmaker and chairman of airline Cityjet, says recruitment agencies have become too dominant and are charging employers exorbitant and unsustainable commissions.

He says agencies seek up to 28 per cent of the salary of anyone hired by a client company. In the case of software engineers and other similarly qualified staff, this could come to between €14,000 and €19,000.