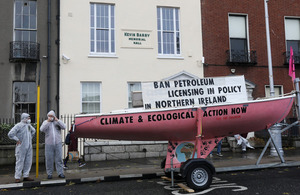 Or a delivery of weapons. 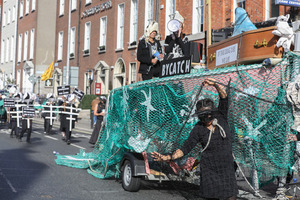 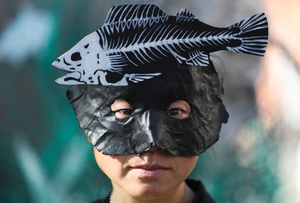 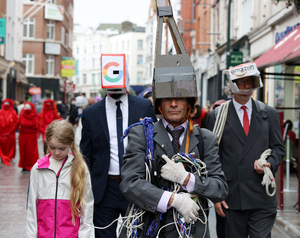 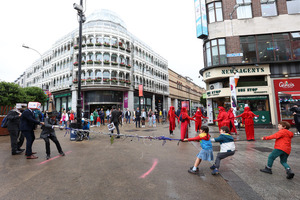 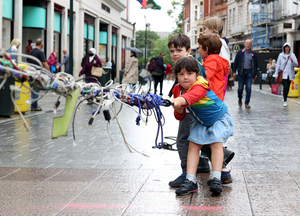 Doom laden members of ever so slightly creepy climate group Extinction Rebellion officiate a tug of war between square-headed Big Tech CEOs and young tykes to reflect the uneven struggle between eco warriors and companies that profit from fracking, including Amazon and Google. 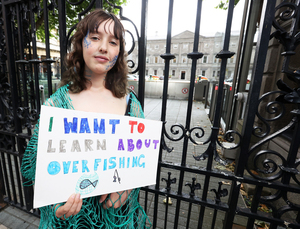 Members of Extinction Rebellion – urging a ‘sea change’ concerning pollution, over-fishing and habitat destruction in our seas – hand a petition reflecting these concerns to Minister of State for Heritage and Electoral Reform Malcolm Noonan (above right) outside Leinster House.

They’re living in a bream world. 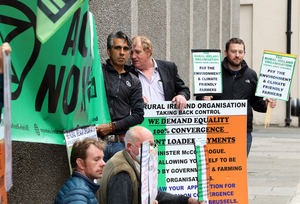 And you’ve been caught.

Extinction Rebellion partnered with some Irish farmers to hold a demonstration highlighting how the government is ‘complicit in encouraging constant growth within the agricultural sector, at the expense of the environment and small farmers’ quality of life’.

The deal ends a near three-year struggle over the future of the EU Common Agricultural Policy.
It will use up around a third of the EU’s 2021-2027 budget, spending €387bn on payments to farmers and support for rural development. 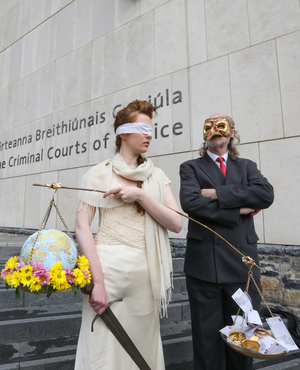 Extinction Rebellion activists Ceara Carney (dressed as Lady Justice) and Louis Heath (dressed as ‘the State’) protest against ‘climate inaction’ and in support of climate activist Orla Murphy, whose case over criminal damage at the Department of Agriculture this year has been dismissed, but who still faces a charge of criminal damage at Iveagh House. 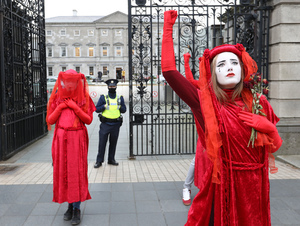 Mayor Chu is the Chair of the Green Party, but has announced she wants to run in the Seanad by-elections next month as an independent candidate.

“Though I am a Green member, I understand I am not endorsed by the party since the executive made the decision not to hold a selection convention. I also understand there is no pact in place with any other parties as confirmed by the leader at the last executive meeting. I am not looking for any support from the party since this was a personal choice to ensure that there is proper representation,”

“In the current climate, it is important to have women and minorities represented at this election. This choice, as I said, is a personal one, as is my candidacy. After spending the year speaking to children from all backgrounds that anyone can run for election I felt that it was essential I follow what I preach.

I see @hazechu is running for the #Seanad. That’s fair enough and I wish her well… BUT the office of @LordMayorDublin deserves more respect than this. It is not a stop gap position.

If Cllr Chu is willing to resign as Mayor if elected as Senator, then better to resign now. 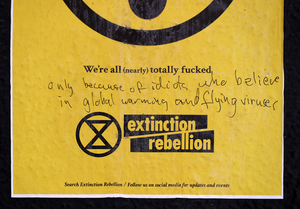 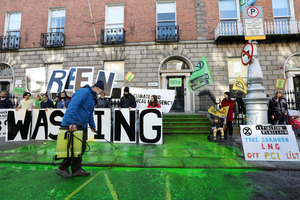 Members of Extinction Rebellion protest over climate change by spraying green paint on the entrance to Fine Gael HQ.

Members of Extinction Rebellion deliver  ‘Three Christmas gifts’  to the State Street Corporation on behalf of the oil, coal and gas industries and  “for the billions in State Street managed assets that enable these industries to destroy our planet”.