Second case of Monkeypox in Ireland confirmed as 179 cases in UK https://t.co/VdCfEDbLTB pic.twitter.com/QGEArigS0K

Fauci’s agency, the National Institute of Allergy and Infectious Diseases (NIAID), has previously come under scrutiny for funding bat coronavirus research at the Wuhan Institute of Virology, which many public health experts and intelligence officials believe to be the source of COVID-19.

NIAID has also funded research into potential cures for monkeypox, shortly before the viral disease began spreading in a global outbreak. The curious timing of the NIAID grant comes amidst pharmaceutical giants including Pfizer and Johson & Johnson making record-level profits due to the COVID-19 pandemic. 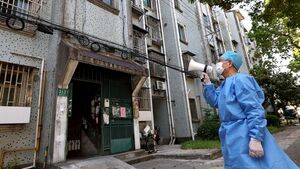 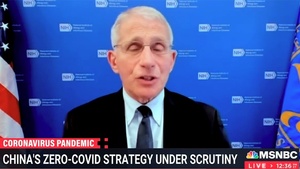 “China has a number of problems, two of which are that the complete lockdown, which was their approach, a strictest lockdown you’d never be able to implement in the United States. Although that prevents the spread of infection, I remember early on they were saying, and I think accurately, they were doing better than anyone else.

“You use lockdowns to get people vaccinated so that when you open up, you won’t have a surge of infections.

“Because you’re dealing with an immunologically naive population of the virus because they’ve not been exposed because of the lockdown.

Also, they have a lot of their older population, which are the most vulnerable among us, and so, there’s a double negative there. One, they don’t have people who are protected, and B, the people who need it most, are not getting the vaccination. That’s the source of the problem in China.”

Here come the ‘health and safety’ stormtroopers in Shanghai. It’s for your own good, apparently. pic.twitter.com/OL0IT5GxvM 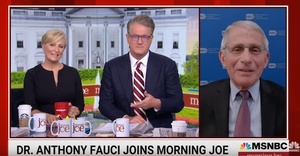 Dr Anthony Fauci addresses concerns raised by the publication of his emails that showed leading virus experts warned him COVID-19 may have been created in a lab while he publicly played such claims down.

He wants everyone to “keep an open mind’ but his money is still on the bats. 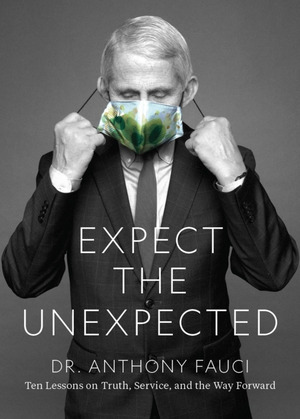 Amazon and Barnes & Noble have apparently taken down a new book by Dr. Anthony Fauci, the director of the US National Institute of Allergy and Infectious Diseases and the chief medical advisor to the president.

Fauci’s 80-page book, Expect the Unexpected: Ten Lessons on Truth, Service, and the Way Forward, is expected to be released by National Geographic Books on November 2.

National Geographic Books confirmed the removal to DailyMail.com, which reported that the book sale had been posted accidentally and prematurely.

“The enemy is the virus, the enemy is not the public health people who are trying to contain the virus.”

The entire mainstream c0vid narrative is starting to unravel.

The average person truly does not understand just how many layers of deception, lies, criminality, and malfeasance there are. In every country, at every level. 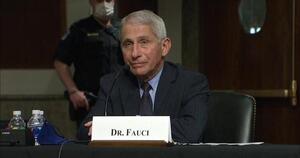 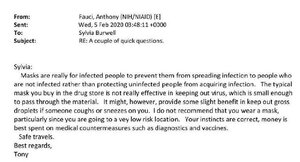 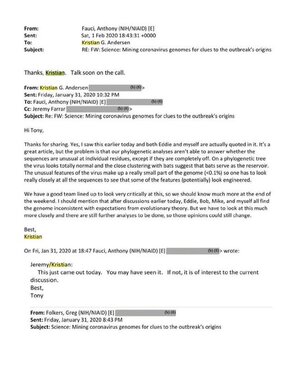 Dr. Anthony Fauci, the public face of the US government’s response to the rona, has released his emails and correspondence at the request of The Washington Post.

The package contains communications from March and April 2020.

Included is an email (top) from Dr Fauci saying masks are ineffective as the virus “is small enough to pass through the material”.

Another (middle) from scientist Kristian Anderson tells Dr Fauci that SARS-CoV-2 has “unusual features” that “potentially look engineered”. Dr Fauci has defended the natural-origin theory since the beginning of the pandemic. 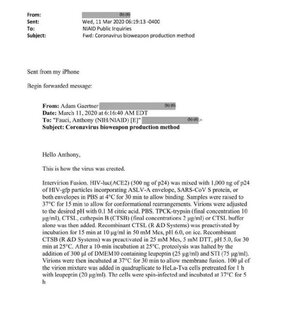 Also in the email cache.

Virologist Adam Gaertner (above) claims to know the process of ‘how the virus was created’ and includes ingredients, such as ‘HIV’, along with a recipe.

But could a bat prepare all that?

Something the experts might ponder in the days ahead.

Firing Fauci does not go far enough. Anthony Fauci needs to be tried and put into federal prison. He ruined millions of lives via depression, bankruptcy, suicide, & preyed on children via school. He (and many others) have taken part in the crime of the century.

We all knew it.

Two Fauci emails. In one he says that masks are for sick people. In the other he admits that asymptomatic spread is rare. So why were people with no symptoms wearing masks for a year? It’s almost like it was all a charade. pic.twitter.com/gu8rn5R0yj