The 64Kw/h battery is good for 320km in cruise mode but considerably less if you engage the full 536bhp four wheel drive. Top speed is 240km/h but the thing will accelerate to 100km/h in less than 3 seconds.

Debuting next month at the Goodwood Festival of Speed and yours for €335,000. Behold: the Aviar R67 – a conceptual all electric version of the 1967 Ford Mustang by Russian startup company Aviar.

It may never make it to production, but still. 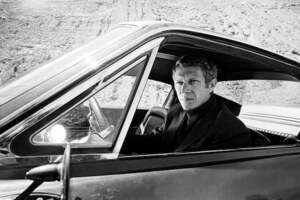 No ordinary 1968 Ford Mustang, rather, one of two fastbacks driven by Steve McQueen in Peter Yates’ ultra stylish Bullitt (1968).

This is the ‘hero’ car (the battle-scarred stunt double has since disappeared, having been sold to a salvage yard after filming).

Formerly believed to have been lost (or, worse still, scrapped like its stunt double), it’s actually belonged to the same New Jersey family since 1974 and was unveiled this week at the 2018 Detroit Motor Show, close to the 50th anniversary of the cinematic car chase that sealed its reputation.