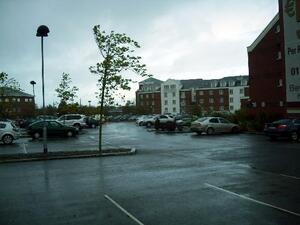 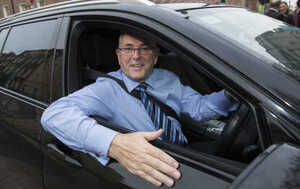 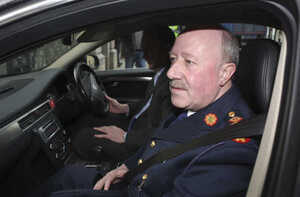 Former Garda commissioner Martin Callinan met the then Public Accounts Committee (PAC) chairman John McGuinness in secret in 2014 to say that Sergeant Maurice McCabe was “not to be trusted”.

Mr Callinan and the the Fianna Fáil TD had a secret 20-minute meeting ahead of the appearance of Sgt [Maurice McCabe ] before the PAC at the height of the Garda crisis.

It has emerged that, at the meeting, which took place in the car park of Bewley’s Hotel on the Naas Road in Dublin on January 24, 2014, the commissioner sought directly to convince the PAC not to hear evidence from Sgt McCabe.

This was six days before Sgt McCabe finally did give testimony in private to the committee [to outline his knowledge of extensive abuse of the penalty points system].

….It has been confirmed to the Irish Examiner that it was Mr Callinan who sought the meeting with Mr McGuinness.

Yesterday: ‘We Are Part Of A Cover Up’

Related: Not So Fast 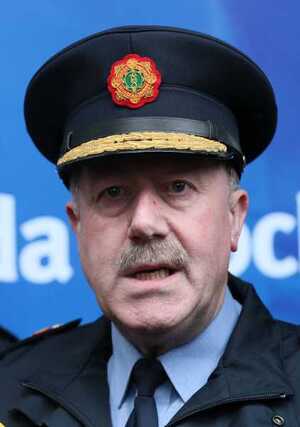 [Martin Callinan who has resigned as Garda Commissioner]

“I take no pleasure in the demise of any human being.Martin Callinan has done this country some service throughout his long career. But his position had become untenable and his decision to resign was the correct one.”
Garda whistleblower John Wilson this morning 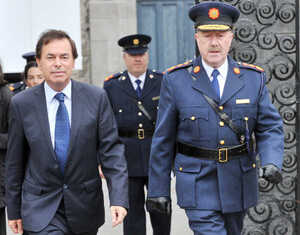 Justice Minister Alan Shatter has decided to call in the Garda Ombudsman Commission in the public interest. The decision has been welcomed by the Garda authorities…
The minister’s move seems likely to end the impasse between the committee and Garda Commissioner Martin Callinan over the possible appearance of one of the whistleblowers, who is a serving member of the force, before the PAC on Thursday…. 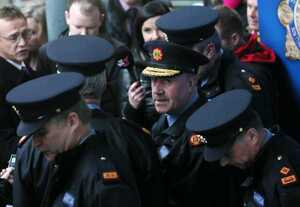 “I have the height of respect for the Public Accounts Committee…But I have my own backyard to watch, and I intend to be as transparent as I have to be when appearing before these people and providing the type of information that they require.”

Garda Commissioner Martin Callinan (above) in Dundalk this evening. 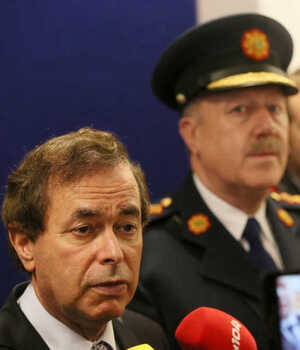 “[Martin Callinan] was almost disdainful of the Public Accounts Committee, which is after all a democratic forum.
“He then went on to say that they [whistleblowers] should be dealt with by me, myself – meaning that he was important enough to do it, but not us.
“He went on to talk about being usurped by subordinates, which was an extraordinary phrase to use – again regarding his ‘subordinates’, as he calls them, as being second class citizens when they have every right to express a view, an opinion, and give evidence in public.” 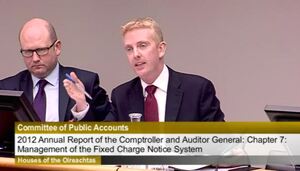 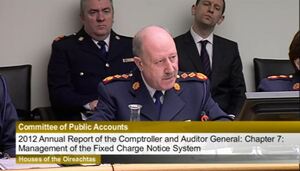 Mr Nolan tried repeatedly to ascertain from the Commissioner what his definition of corruption is in relation to the quashing of penalty points…to no avail.

Derek Nolan: “If a garda cancels penalty points for a friend or for someone they know or a relative, does that come under your definition of corruption?”

Martin Callinan: “I would expect, Deputy, that each individual case would be examined on its merits and, if it’s the case that there’s justification for a cancellation, then that would take place. I don’t expect any member of An Garda Síochána to get involved in doing favours for their friends or for their family, or anybody else. I would expect, I would expect that all of these decisions are made, based on a solid foundation..”

Nolan: “Sure but I’m just, I’m being pedantic because, you’ve referenced the [John O’Mahony] report and you’ve said there was no evidence of criminality or corruption. And what I’m trying to get at is what does corruption mean? Does it mean that if I cancel it for a friend, as a favour, and I got no benefit for it, that it’s not corruption? But if someone paid me to cancel the fine, then it is corruption? I’m trying to find out if this level, if this level of activity, that was maybe informal, doing someone a favour, doing someone a kind of a, if that qualifies in the report as being corruption or not?”

Callinan: “Well, all I can point you towards, deputy, is, with the greatest of respect that I expect that everybody making those decisions made them for the right reasons and they’ve bona fide reasons, that there’s a genuine reason proffered in the first reasons by the person that’s making the petition and that the professional judgement of the officer making the decision is balanced and fair. That’s all I can ask. Now whether your brother, your sister, mother or father shouldn’t really come into it. It’s either it’s right or it’s wrong.”

Nolan: “I understand that, I accept that but this is my point, is that what your internal investigation into the matter took a sample of cancelled notices, of cancelled Fixed Charge Notices, and went through them, I think there was 672, were randomly selected. And the examination found that there wasn’t any evidence to suggest any act of criminality or corruption. So what I’m trying to do is tease out what this statement means. And is it saying that if, does corruption mean I have to take money to do it or does corruption mean that I was, I was doing a favour for a friend? I mean perhaps the person who wrote the report can tell me what that means?”

Callinan: “Well, certainly of course he’s [John O’Mahony] here and that’s the reason he’s here. but corruption, in my view, well it doesn’t appear to be defined in law. One would have the ordinary meaning applied to it, the ordinary meaning that we would understand to be corruption, public officials of course is catered for, so when you’re talking about that type of corruption, you’re talking about perhaps someone that has received money or a favour, or renumeration – all of those things – but that’s as far as I’m concerned where it lies, I can do no more than say to your deputy, in response to your question, that I would expect all of my officers to act fairly and appropriately. And in circumstances where they found there was justification for cancelling ticket that they would do that and otherwise they would reject that and send it forward for summons. It’s…all I can do is provide guidelines and there’s a reasonable expectation that people will follow those guidelines.”

Nolan: “I accept that and I’ve seen the report that’s been updated from the C&AG and the new processes that have been put in place which will make sure this can’t happen again. But I’m trying to…you see this has come to the fore because people are agitated about it. And read it and made an issue out of it and demanded that it went to the public. And the things that they’ve said is that if you know a guard, some guards, and I actually want to preface that, if you knew some guards, you could get off your penalty points. If you were a family friend, if you were someone who worked with someone…And it wasn’t that there was money being exchanged or that was favours being done, it was simply because there was a personal relationship and that liberty was there. I mean we’ve identified that the system in place already was weak and there was very little, a lack of information and the C&AG has expressed his concerns about the system in place. The [Assistant Commissioner John O’Mahony] investigation done took a sample of 672 Fixed Charge Notices and came to the conclusion that there was no evidence of criminality or corruption and I suppose what I’m trying to find out is, is there evidence of this other attitude: of this other possibility, which is that if you knew somebody, that you could get your penalty points cancelled? Or that there was a lax or a disregard for the process?”

Callinan: “Well, deputy, with the greatest of respect, I have read and I’ve seen all of those allegations, the same as you have. And it is the case that I, I’m sorry for repeating myself, it is the case that I expect members of An Garda Síochána, who are in charge of this responsibility, to act fairly and impartially, regardless of who these people are. Of course I’m alive to the allegations, and of course I’m reading these things. But, let’s be clear: I’m not saying the system is weak, you’ve mentioned that a few times. The system itself, there have been weaknesses identified within it but the process, the overall process is quite substantial in terms of success. I can’t, I know the point you’re making, deputy, but…”

Callinan: “With the greatest of respect, deputy, I’ve answered you a couple of times on the point and I’ve clearly indicated to you that if you’re suggesting to me that a family member or somebody close to the Superintendent, or the Inspector, can somehow or other influence that person, to look after the ticket, then that’s not the conduct that I would accept as being a valid reason for the cancellation, nor could I ever stand over that. That’s all I’m saying.”

Nolan: “Did the [O’Mahony] investigation that took place uncover such actions, as I’ve outlined?”

Callinan: “Well I think if you look at the report, you’ll see the report lays out the percentage of cases where members of An Garda Síochána, within the band of allegations which is what Mr O’Mahony’s investigation is doing, it’s looking at a set of allegations, 189 different allegations that’s speak to 2,198 separate cancellations, so that’s a very, very targeted exercise and it sets out the number of, the percentage of members of An Garda Síochána who have had tickets cancelled, I think it’s in the region of 8%, of those particular cohort of cancellations, for reasons of being on or off duty.”

Nolan: “The C&AG report of 2000, so 14 years ago,stated that there was a practice of allowing fine notices to be cancelled on the instructions of garda superintendents without recording the reasons and that this may lead to different criteria for cancellations being applied in different areas and they also created the perception that certain kind of fines could be fixed. And that was from the C&AG report in the year 2000. Those concerns are repeated in 2003 and again in 2007. Yet it took allegations, whistleblowing and, you know a serious media storm in 2012 to get updated and in place new investigations into this. Why did it have to get to a national scandal, a national uproar for recommendations that were made 13/14 years ago to be implemented?”

Earlier in the meeting, PAC chairman John McGuinness said the names of the gardaí and alleged offenders on documentation contained in the ‘box of evidence’ – given to PAC by a garda whistleblower – have been redacted and therefore compliant with data protection rules.

He said the two garda whistleblowers have been invited to attend next Thursday.

However, in reply to a question from Fine Gael TD Simon Harris, Mr Callinan said he would rather the whistleblowers didn’t come before PAC, saying:

I think in the first instance it goes without saying, I’d have to take legal advice but my personal view, my personal view is that members of An Garda Síochána, who are serving, or retired, should not becoming in to this forum and using this platform to discuss matters of such importance, particularly in the context of criminal and serious allegations that are being made, against their colleagues. I think it would certainly have an adverse affect on the maintenance and discipline and good order in the Garda Síochána and that would be my primary concern.