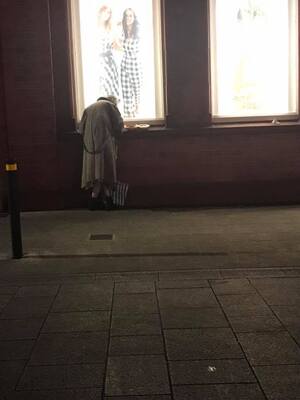 An elderly woman eats a meal from a plastic bowl, provided by the Homeless Street Cafél in Dublin City Centre on Tuesday

Tuesday night was essentially a “successful” night for us. We had food for everyone, lots of clothes and toiletries and even treats for most people. Our volunteers looked after our service users and our cooks and bakers outdid themselves.

But even on your best night it’s nothing but a plaster or a Band-Aid on what is just a horrific wound.

This issue is beyond crisis.

People always want to talk to us about the children we meet and how sad that is. If I’m honest I find the older generation that use our service even more heartbreaking.

It seems there is no time left for change for them, a dearth of hope really.

To be living in food or heat poverty at their age, relying on a soup kitchen for necessities is horrifying to witness.

I watch this woman eat her meal from a plastic bowl on a window sill every week and I despair that this is her ‘golden years’.

…Please vote with these people in mind on the 8th, the current government has failed miserably while claiming to be successful, time for radical change! 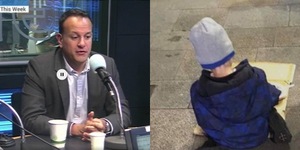 Taoiseach Leo Varadkar being interviewed in RTÉ on Sunday; *Sam, a five-year-old homeless boy who was photographed eating from a piece of cardboard in Dublin last October

Further to Taoiseach Leo Varadkar’s interview on RTÉ’s This Week at the weekend, in which he was asked about the picture of the homeless five-year-old boy Sam (not real name) who was photographed eating from a sheet of cardboard on a street by volunteer group The Homeless Street Café…

And the Fine Gael leader replying:

“…we tried to find out who that child was, because we wanted to make sure that he was looked after, that perhaps he could be moved into a family hub or perhaps we could make sure there were no child protection issues. We still haven’t been able to find that child unfortunately…

Saoirse McGarrigle, in The Irish Mirror, reports that Denise Carroll, from the Homeless Street Cafe, has said the boy is “very easy to find”.

Varadkar to @rtenews This Week: “…shocking, shocking photograph and one I found very upsetting. We still haven’t been able to find that child, unfortunately”

Homeless Street Cafe: “We speak to his mother and him every week.. They also have our contact details and we have hers”

Homeless Street Cafe: “The majority of the soup run would know who this family are … Claire Byrne did a piece and she was in town and he was in the film so he is very easy to find.”

Also Varadkar on his “attempts” to find the child known as Sam: “perhaps we could make sure there were no child protection issues” The children of this country need to be protected from the lies and inhumanity of this Government.

Also, where is the follow up from RTE News or David McCullagh after being blatantly misled?”

Previously: You Had Nine Years 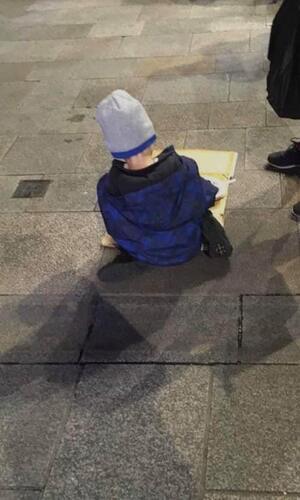 ‘Sam’, aged five, eating as he knelt on a piece of cardboard on Grafton Street last night

The Homeless Street Café is a group of volunteers who offer food, toiletries, clothes and friendship to people who are homeless every Tuesday night on Grafton Street in Dublin.

One of the group’s members posted the above picture on the group’s Facebook page with the message:

“There is an image burnt in all the teams’ minds tonight. It’s wrong and it’s distressing but this IS happening and it’s only getting worse each week.

‘Sam’ is 5 and this was him eating a dinner of carbonara tonight on a sheet of cardboard. Can we really accept this?”

We have no way of completely verifying the accuracy of the above image but we are taking the homeless café at their word unless we hear otherwise and no ‘clickbait’ motives were behind this post and sorry for upset caused.

The Homeless Street Café has written the following update on their Facebook page:

“Thank you so much everyone for your overwhelming response and for not just accepting that this is ok.

This post has reached over a quarter of a million people which is amazing and we have over a thousand comments and messages to go through.

We are small volunteer group and all our team are back in their day jobs today so please bare with us as we navigate through our next steps.

Our priority as always is continuing to support the homeless who come to us each week and the children among them that “Sam” represents.

**To confirm “Sam” is in emergency accommodation and attends school. His mother is simply trying to access nutritious home cooked meals for him.