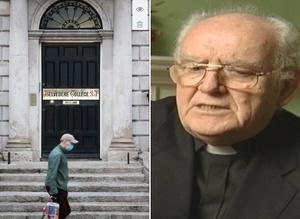 The Jesuit Order this week released the name of a former teacher. Fr Joseph Marmion, now deceased, who abused boys at Belvedere College in the 1970s

I welcome the belated admission from the Jesuits that Fr Joe Marmion SJ abused children when he taught at Belvedere College in the 1970s.

Those of us who attended that school at that time knew Marmion and his reputation, saw the bullying with our own eyes and heard rumours of the sexual abuse of our classmates.

Victims were not easily forthcoming about these events at that time and even today not every victim wishes to relive these times. We should respect their privacy.

For the record, however, it should be known that when the Jesuits finally and quietly removed Marmion from his teaching post, it did not remove him from contact with children.

He remained on the school premises throughout the 1977/78 school year, my senior year. The Jesuits moved him along quietly to Gardner Street around the corner but allowed him continued access to the school where his victims could see him every day.

The Jesuits put the reputation of the school first and the safety of the children second.

They have acknowledge that finally in 2021 but lacked the moral courage to do the right thing at the time.

Those involved know the role they played, as do we.

Wednesday: Moved To Another Parish Pope Francis (top) and photos of some of those who ‘ disappeared’ during the Argentine military dictatorship.

In a profile of the new pontiff, The Guardian makes no reference to Pope Frank’s culinary skills.

“As head of the Jesuit order from 1973 to 1979, Jorge Bergoglio – as the new pope was known until yesterday – was a member of the hierarachy during the period when the wider Catholic church backed the military government and called for their followers to be patriotic.
…Bergoglio twice refused to testify in court about his role as head of the Jesuit order. When he eventually appeared in front of a judge in 2010, he was accused by lawyers of being evasive”.

Photographs of the disappeared via