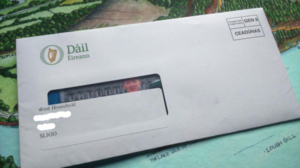 “Promotional leaflet from [Fine Gael TD] John Perry. Handy the way it allows you to see who it’s from before you carefully read it.” 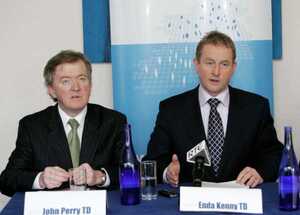 Controversial former Fine Gael Junior Minister [for small businesses] John Perry who failed to secure a berth for the next General Election made a desperate plea on RTÉ Radio’s Morning Ireland for Enda Kenny to fulfill a ‘promise’ he made to all sitting TDs.

Audrey Carville: “Former Fine Gael Junior Minister John Perry is understood to have made an appeal at the Fine Gael Parliamentary Party meeting last night to be added to the Sligo-Leitrim ticket for the General Election next year.  Mr Perry recently lost out at the Selection Convention, sitting Fine Gael TD Tony McLaughlin from Sligo and former Gerry TD Reynolds from Leitrim were both selected instead.  John Perry’s on the line now, John Perry, what did you say last night at the Parliamentary Party?”

John Perry: “Good morning Audrey, I just, I said very clearly that the commitment was given to all sitting TDS that they would be allowed to count the next general election, I suppose, bearing in mind that I’ve been a successful candidate for four general elections and I got ahead of the poll on the last occasion.”

Carville: “Now who said that about sitting TDS? Because Enda Kenny was asked, but he didn’t give a clear answer about that.”

Perry: “That’s why I raised it at the Parliamentary Party, because I think that, I would be a huge supporter of Enda Kenny, I supported him in 2002, I was a Director of Organisation in that period, and since then, at 2011 in a very critical time in his career, I supported him.”

Carville: “So do you think he should intervene directly and add you to the ticket or tell, make the organisation that you should be added to the ticket?”

Perry: “I think, well, my track record speaks for itself and as Minister I travelled the country extensively and held many engagements for many Ministers in the chamber and elsewhere as well but the precedent had been set because a Minister, Richard Bruton, obviously, he’s a Minister but I’d be very much of the opinion that all parliamentarians are very much equal and this precedent would be quite extraordinary for FG because I’m getting huge support across the parliamentary party and if it was allowed to stand it would mean that future deputies in the future could be deselected.”

Carville: “But you were beaten fair and square in the contest, I mean the Selection Convention, you don’t have an automatic right to stand for election.”

Perry: “Unfortunately  due to a technical glitch a number of delegates of mine from Tubercurry were excluded and the most important aspect is that I will be the people’s representative, elected by the people of Sligo-Leitrim on four occasions, and just due to a deficit of 5-6 votes I knew going into the Convention because we had made every attempt to correct the anomaly and technical glitch in Tubercurry and that would not be allowed…”

Carville: “And do you think was that deliberate?”

Perry: “I didn’t say that no, just that there was a technical glitch but I’m a Fine Gael deputy for 19 years, it is the people of Sligo-Leitrim who elected me, unfortunately I was beaten by a small margin of votes but it’s very important to recognise that on four successive occasions I delivered and on the last occasion I delivered the second seat.”

Carville: “But the selection convention has made its decision, its leaving you behind, can you not accept defeat?”

Perry: “It’s not defeat because the only defeat that I would accept is the people of Sligo-Leitrim and I think the most important issue is the commitment, this precedent if it was allowed to stand would be quite extraordinary and no previous leader and the fact he made the commitment on night of Richard Bruton’s… he was added the next day and the Taoiseach stated it, I respect the Taoiseach as a man of his word, he said at the Parliamentary Party and that’s why I raise it here that every sitting deputy would be allowed to contest the election regardless of the Selection Convention…”

Carville: “So again do you think Enda Kenny should intervene?”

Perry: “Absolutely, yes indeed, he s the President of FG the Taoiseach and it’s ultimately his decision and no one else, he has the final say on this, he can instruct the National Executive to add the name of John Perry and the National Executive has the power to add or delete candidate, so that in the name of Justice fairness and integrity the Taoiseach has no choice but to add me.”

Carville: “And do you think there’s three seats in the constituency?”

Perry: “You must remember that in Cavan-Monaghan there’s four candidates, three candidates are going for election in Cavan Monaghan, in Galway West there’s four candidates where john monaghan went from Mayo to Galway. More importantly, I suppose we are in the largest constituency in the country it is all of Sligo and Leitrim, it goes up to South Donegal and West Cavan and I believe from my work you see I would have an unrivalled record of delivery of work for 19 years so I have no difficulty facing the electorate and would be successfully reelected.”

Carville: “You mentioned the technical glitch, but do you think the difficulty in your being reelected had anything to do with the controversies you were surrounded by in recent times the appointment of your wife to a €38,000 a year role and then your difficulties with Danske Bank?”

Perry: “On the first issue, my wife had been working with me for 19 years and due to the fact that my position wasn’t filled for six months she filled the position for 10 months while my present PA was being trained and you must remember there’s even several ministers currently who have their spouses working for them, currently, you check the records and more importantly there are several senators, when it comes to the issue of Danske Bank that matter has been finally and fully settled, so with regard to that matter everyone has challenges out there and not only with John Perry in Leinster House but with certain other ministers who have challenged it…it may not be in the public domain…”

Carville: “So you’re not going without a fight anyway?”

Perry: “Anyone that knows me, I fight for my constituents all the time, I think that’s why I’m a very successful TD, I don’t take no for an answer when justice is certainly not allowed to happen. I intend to stand as a Fine Gael candidate in the next general election and I will be extraordinarily surprised if the Taoiseach isn’t a man of his word and fulfils his commitment.”

Carville: “If he doesn’t, will you run as an independent?”

Perry: “I believe in fighting within the party, I’m a party activist, all my life I’ve supported FG I believe FG and I’ve been worked tirelessly hard for the past four years in supporting this government which I admire immensely in doing very difficult jobs to ensure that the economy has been turned round and I believe entirely in the determination of this government to be re-elected and I want to be a part of it.”

Carville: “This has been going on for quite a while now, you have your difficulty in being selected and you’ve made many appeals to be put on the ticket but there’s been no intervention, are you disappointed with that?

Perry: “It hasn’t been going on, It’s been going on since last weekend, the elements of, it would be different if the commitment wasn’t given by the Taoiseach, it’s been given quite clearly in the Parliamentary Party room, this is the debating chamber of Fine Gael, this is where all every previous leader John Bruton Liam Cosgrave, no leader in the past, several precedents for adding on a deputy and the most latest precedent, there’s four candidates going, three candidates going in Richard Bruton’s constituency, and there’s no reason why as parliamentarians we shouldn’t be treated equally and I expect the Taoiseach to act accordingly.” 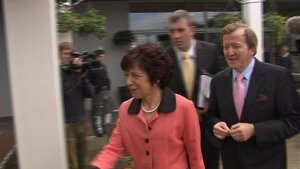 Fine Gael TD John Perry defends the appointment of his wife Maria as his parliamentary assistant. 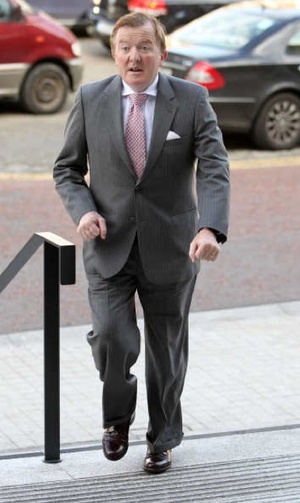 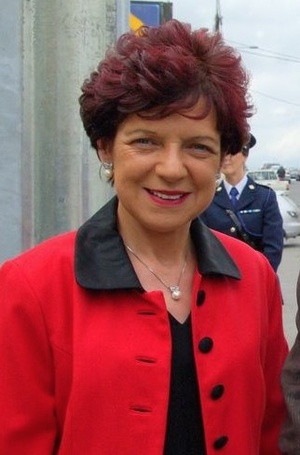 Perhaps best known for claiming €31,867 in mileage in one year.

Marie Perry, or Marie Mulvey as she is listed in official documents, was hired on 2 January this year, the RTÉ Investigations Unit has learned.
Mrs Perry was given a job as a parliamentary assistant, according to records obtained under the Freedom of Information Act.
The appointment was made despite the fact that Taoiseach Enda Kenny has said giving family members such jobs is “not good practice”.
The role is paid on a salary scale of between €38,760 and €49,035 a year, with overtime payments of a further 20% on top of that salary available.
…Mr Perry and his wife have been in financial difficulty in recent years and had been sued by Danske Bank over unpaid loans relating to their business and property dealings.
In July of last year, the bank registered a court judgment against both Mr Perry and his wife for the repayment of debts of €2.47m. 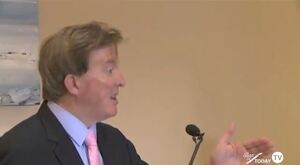 John Perry telling a lie that he’d resign if Sligo cancer services weren’t restored, then lying about ever saying it: http://t.co/2raoZJ0fei 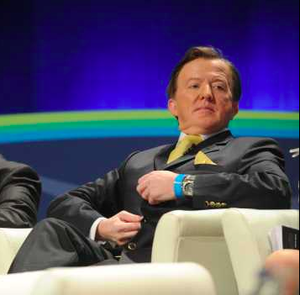 Incredibly Minister of State for Small Business, John Perry (above at today’s Fine Gael Ard Fheis) has claimed €31,867 mileage allowance in the past 12 months. With the total cost of owning and running an average car in Ireland put at just over €11,000 by the AA, it is difficult to see how Minister Perry is not making a handsome profit on his mileage.

Ministerial Expenses For The Past Year Published – Prepare To Be Outraged! (Nama Wine Lake)