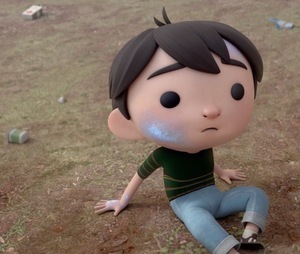 A graduation short by students of Supinfocom Rubika Valenciennes telling the strange tale of Finn – a kid with glowing ‘stains’ on his body who finds common ground with a group of fellow outcasts. It examined how certain vulnerable children, in the care of the State, have been harrowingly failed by the State.

It also looked at cases from the report published yesterday by the Special Rapporteur on Child Protection Dr Geoffrey Shannon which looked at the use of Section 12 of the Child Care Act 1991 by An Garda Siochana.

In 2011 a young boy living in voluntary foster care – who we’ve named ‘Mark’ – told his birth mother [‘Susan’] he had been inappropriately touched by another, male foster child twice his age who was also living with the same foster family.

‘Susan’ – which is not her real name – discovered ‘Mark’ had made a similar allegation to his foster parent 5 weeks earlier but it had not been reported to the HSE.

‘Susan’ asked to have ‘Mark’ moved from the foster placement while an investigation took place – this did not happen.

Instead a safety plan was put in place by the HSE. – this consisted of little more than an instruction to the foster parents that the two boys – who had been sharing a bedroom – “should have separate bedrooms and that the [foster] carers should supervise” them closely.

The experts concluded that ‘Mark’ gave “a credible account of experiencing inappropriate sexual behaviour by his foster sibling”.

But while ‘Mark’ was assessed, it appears from case notes that his foster sibling was not.

Over the following months ‘Mark’ displayed sexualised behaviour and ‘Susan’ repeatedly reported this to the social work department.

[‘Susan’ said: “He was using his teddy bear to, pushing it up against his genitals, it was like he was imitating what had been done to him. Yeah he was saying ‘touch me you cunt’, he tried to kiss his older brother, he put his hand on his inner thigh and tried to kiss him in an adult way.”]

‘Susan’ believed her concerns were not being taken seriously by social workers so she reported the matter to the Gardaí asking them to investigate.

In fact cases notes seen by RTÉ Investigates show that An Garda Síochána were “…quite irate…” at the management of Mark’s case by the HSE social work department – stating that the Gardaí…. “Would have a different view of child sexual abuse…” The HSE decided to leave ‘Mark’ in the foster home despite his birth mother’s concerns.

Almost 3 years later… ‘Mark’ made a second allegation – this time to a TUSLA staff member that he was being punched by the same older foster child AND by an adult son of the foster family.

The foster parents were again advised by the social work department to “increase supervision” of the boys and ‘Susan’ was informed about the allegation.

In late 2015 TUSLA applied to the courts for a full care order for ‘Mark’.

As part of the court process ‘Susan’ was required to produce two psychiatric assessment reports carried out on the state of her mental health. ‘Susan’ agreed.

But what ‘Susan’ didn’t understand was that she would be personally billed by her doctor for the reports – €500 for the first report and €300 for the second one.

On one occasion she was forced to take out a loan from her credit union to cover the cost.

In an initial statement to RTÉ, TUSLA said it “…does not require individuals to undertake psychiatric assessments at their own expense…”

However when we went back and asked TUSLA to explain why ‘Susan’ ended up paying  her doctors bill, a spokesperson said they “…cannot comment on individual cases…”

Last year the court ruled that ‘Mark’ will stay in care until the age of 18.

‘Mark’ continues to live with the same foster family to the present day – along with the older child alleged to have previously abused him.