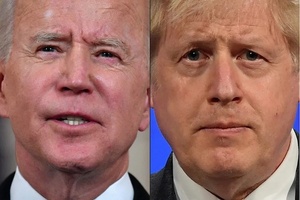 President Joe Biden will bring a grave #Brexit warning to his first meeting with British Prime Minister Boris Johnson: prevent a row with the European Union from imperiling the delicate peace in Northern Ireland https://t.co/NVjjYQjsKm

“The intervention from Joe Biden’s administration is significant but also from my perspective, represents a lot of common sense.

“I think the US are saying ‘sort out this issue, we’re very clear from a United States perspective that the Good Friday Agreement, peace on the island is an absolute imperative and that the protocol is a contributor to that. You’ve signed up to it, adhere to it’.”