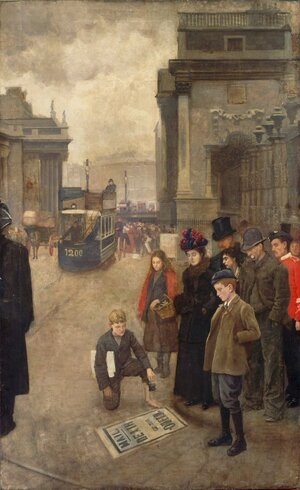 Death Of The Queen (National Gallery of ireland) Earlier this evening Ani Imperialist Action and Macradh activists unveiled a large banner on the ‘Victoria Monument’ in Dún Laoghaire that reads ‘Tear Down the Genocide Queen’.

Victoria, the English monarch presided over the Irish Genocide of the 1840s and the execution of the Fenian Prisoners. It is shameful to have a monument glorifying English Imperialism

Torn down by local Republicans in the 1980s, the monument was shamefully rebuilt by a pro imperialist Fine Gael council in the early 2000s.

Irish Socialist Republicans believe it’s long past time that the monument and all symbols of British Colonialism are torn down.

In the coming weeks the Campaign Against Colonialism will continue to be built. Things could have been so so different for the west of Dublin…. A monument to Queen Victoria by John Hughes RHA, unveiled outside Leinster House in 1908.

Removed in 1948, ostensibly to provide parking for cars… Photographed by Patrick Healy at the hospital (above) in 1971, Victoria languished unloved and unkempt until… …the mid-1980s when she was shipped to Australia, tidied up and placed outside the Queen Victoria Building in Sydney (above). The rest of the monument, including statues of Erin, remain in the grounds of Leinster House (above) and Dublin Castle.