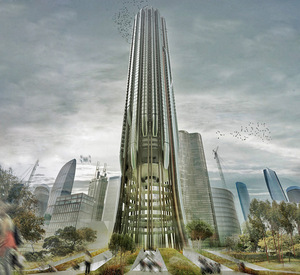 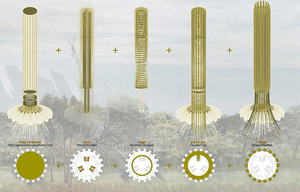 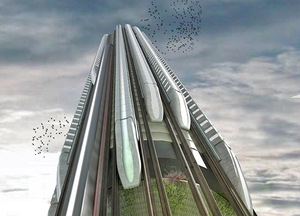 The design – envisaged for a world 60 years hence where the need for high speed transit vies with the limitations of urban space –  flips the horizontal layout of a rail terminal on its end to create a cylindrical mass into which trains arrive hovering above magnetic rails then pivot in the style of ferris wheel carriages as they ascend to platforms within the tower. 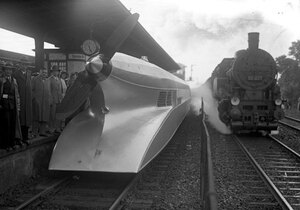 Der Schienenzeppelin – from the days when keeping behind the yellow line meant something:

Conceived and built in 1930 by the German rail company Deutsche Reichsbahn, the Schienenzeppelin was a design alternative to the streamlined steam locomotives of its day. It was a slick and relatively lightweight at 20 tons, running on but two axles and powered by a 46-liter BMW V-12.

The same engine was later used to power the light bombers of the Luftwaffe. The engine sent 600 horsepower to a massive ash propeller, tilted seven degrees to produce downforce.

Prop Driven Rail Zeppelin is Many Kinds Of Awesome (Autopia)