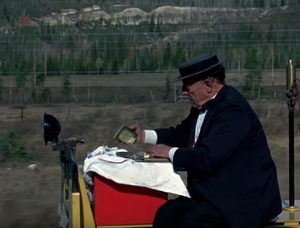 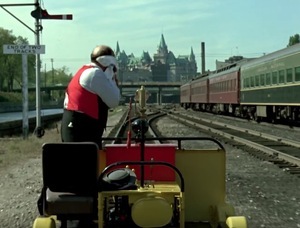 ‘The Railrodder’ (1965) directed by Gerald Potterton and produced by the National Film Board of Canada, was Buster Keaton’s last silent movie. The comedian, writer, producer and stunt performer died at the age of 70 the following year.

As “the railrodder”, Keaton crosses Canada from east to west on a railway track speeder. True to Keaton’s genre, the film is full of sight gags as our protagonist putt-putts his way to British Columbia. Not a word is spoken throughout, and Keaton is as spry and ingenious at fetching laughs as he was in the old days of the silent slapsticks.

In the documentary ‘Buster Keaton Rides Again’ (above), Keaton – resting in the specially appointed railway coach where he and his wife Eleanor lived during filming – talks (yes, talks) about the movie. 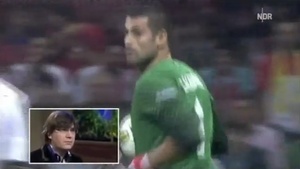 A promo for a live silent-movie type accompaniment [by Stephan von Bothmer] for the Germany-Italy match on Thursday in Berlin.

A few years ago, a video described as ‘The Drunkest Guy Ever’ (but more likely depicting a geezer visiting a mini-mall off his face on ketamine) did the rounds of the internet.

Well now it’s been recut as a silent movie because, well, because the internet, frankly.