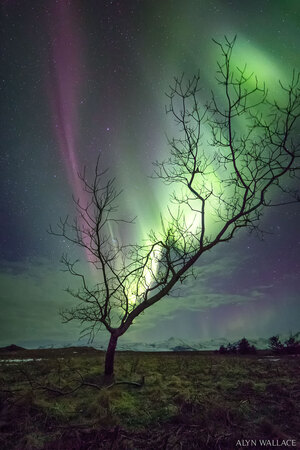 Behold: a rather beautiful visual coincidence: the dark branches of a tree and the light of a distant aurora. To wit:

The beauty of the aurora — combined with how it seemed to mimic a tree right nearby — mesmerized the photographer to such a degree that he momentarily forgot to take pictures. When viewed at the right angle, it seemed that this tree had aurora for leaves. Fortunately, before the aurora morphed into a different overall shape, he came to his senses and capture the awe-inspiring momentary coincidence. Typically triggered by solar explosions, aurora are caused by high energy electrons impacting the Earth’s atmosphere around 150 kilometers up. The unusual Earth-sky collaboration was witnessed in March of 2017 in Iceland. 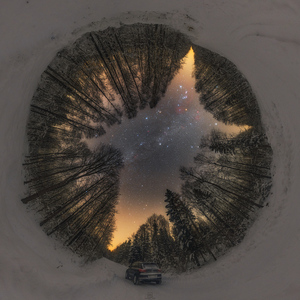 Behold: what could be a very nice ad for what looks like a VW Tiguan, but isn’t. To wit:

Assembled in a 360 degree panoramic projection, the mosaicked frames were captured at January’s end along a quiet country road near Siemiony, northeastern Poland, planet Earth. The night was cold and between trees reaching toward the sky shine the stars and nebulae of the northern winter Milky Way. Near zenith is bright star Capella, a mere 43 light-years above the tree tops. Alpha star of the constellation Auriga the Charioteer and part of the winter hexagon asterism, Capella is a well-studied double star system. Follow the Milky Way above and right of Capella and you might spot the familiar stars of Orion in the northern winter night. 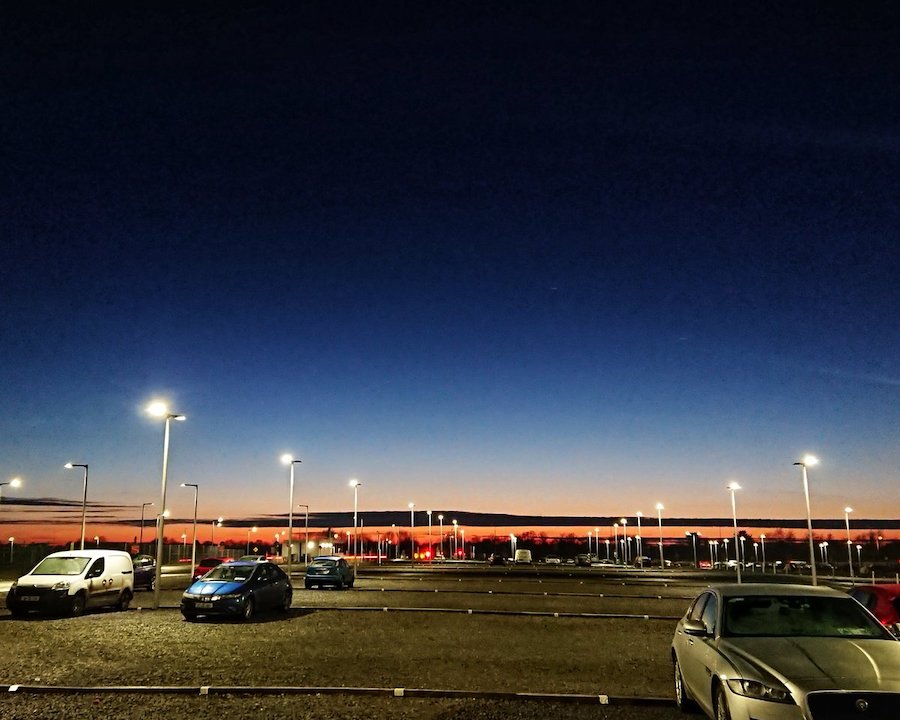 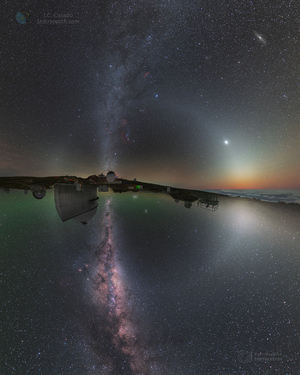 A two-hemisphere view of earth’s night sky composited from images captured at two corresponding latitudes – one at 29 degrees north of the equator, the other at 29 degrees south. To wit:

On top is the northern view from the IAC observatory at La Palma taken in February 2020. Below is a well-matched southern scene from the ESO La Silla Observatory recorded in April 2016. In this projection, the Milky Way runs almost vertically above and below the horizon. Its dark clouds and and bright nebulae are prominent near the galactic centre in the lower half of the frame. In the upper half, brilliant Venus is immersed in zodiacal light. Sunlight faintly scattered by interplanetary dust, the zodiacal light traces the Solar System’s ecliptic plane in a complete circle through the starry sky. Large telescope domes bulge along the inverted horizon from La Silla while at La Palma, multi-mirror Magic telescopes stand above centre. Explore this two hemisphere night sky and you can also find the Andromeda Galaxy and the Large and Small Magellanic Clouds. 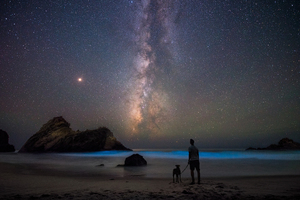 After its spectacular opposition last November, Mars still shone brightly, offering a pleasing addition to shots of the night sky. To wit:

The celestial beacon easily attracted the attention of these two night skygazers who stood still for just a while, but long enough to be captured in the sea and night skyscape from Big Sur, planet Earth. Its central bulge near the southwestern horizon, the Milky Way runs through the scene too, while the long exposure also reveals a faint blue bioluminescence blooming in the waves along Pfeiffer Beach. Now much fainter, Mars can be spotted near the western horizon after sunset, but this month Jupiter is near its closest and brightest, reaching its own opposition on June 10. Night skygazers can spot brilliant Jupiter over southern horizons, glaring next to the stars toward the central Milky Way. 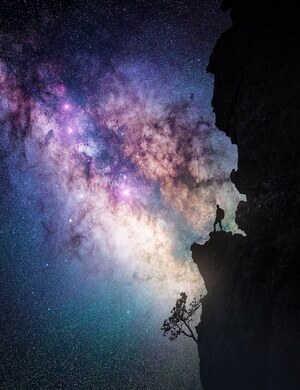 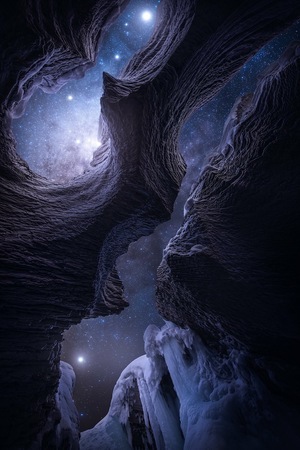 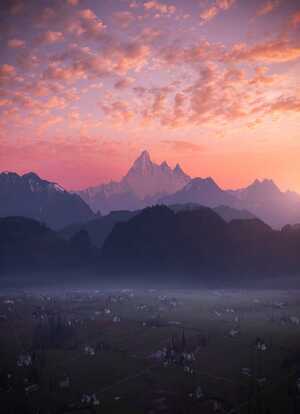 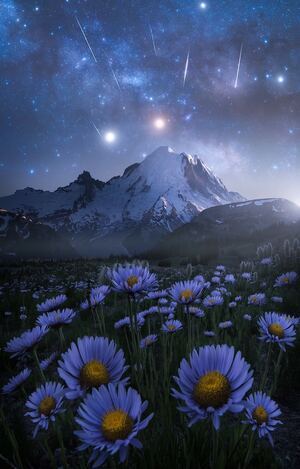 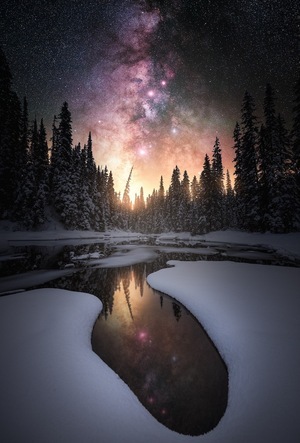 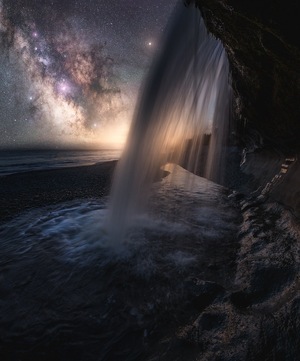 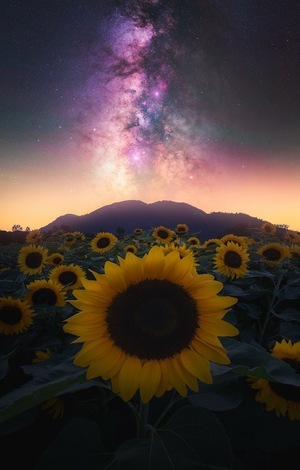 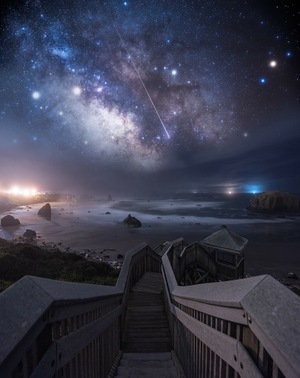 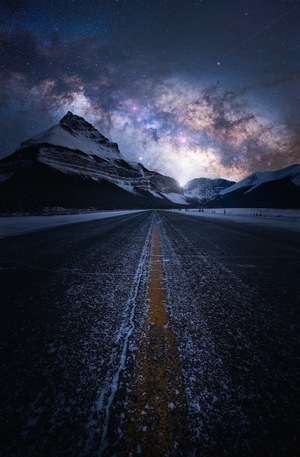 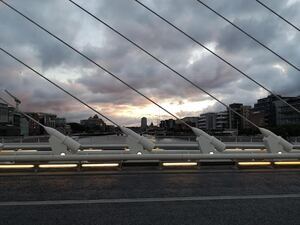 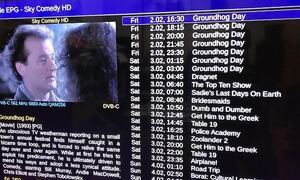 Sky Comedy repeating Groundhog Day all day today until 4.45am. 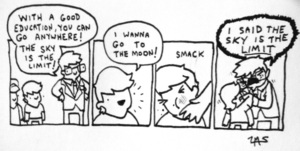 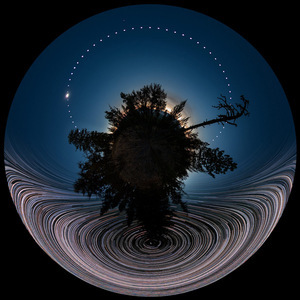 A meticulously rendered composite night-and-day ‘Little Planet’ image shot during the recent solar eclipse by Stephane Vetter at a single location near Magone Lake in Oregon.

All is explained here.