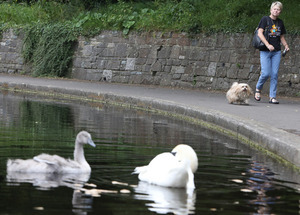 Warning signs to canines and their owners from Dublin City Council after a swan attacked and killed a dog at the park’s duck pond on Saturday of last week.

The Cocker Spaniel was swimming near a group of swans and cygnets when one of the adult swans completely freaked out and used its wings to beat the dog to death.

The swan was described as white-feathered, beautiful with an elegant neck and deceptively poetic wingspan.

The slaying may have been a revenge after a dog mauled a swan to death in Skerries, north county Dublin last year. 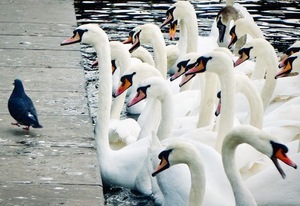 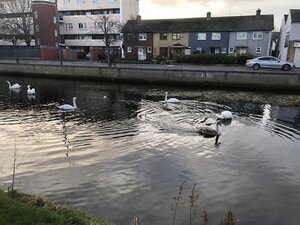 The Grand Canal at Drimnagh, Dublin 12. “There were seven eggs in all.”

“I heard someone hopped over the railings and took two.”

“Yer man had a go at him and I heard he broke the guys’ arm.”

A small gathering of local office workers, passers by and regular locals has gathered around the nesting swans on the Dodder.

The railing that separates the river bank from the walkway protects the swans from over enthusiastic voyeurs and also a handy leaning rail if you wanted to hang around a bit, and on Friday, quite a few hung around a bit – to go all squiggly at the four fluffy cygnets that had hatched the previous day, but to wait in the hope of being a witness to the hatching of the fifth and last egg, which bore a hopeful small but widening crack on the top.

Himself was in a hurry to get to the water, and more or less hanging around the edge wondering what the delay was? Herself wasn’t going anywhere until she was happy with how things were are home, and the little ones were clamouring all over the place getting hot and bothered.

Himself went in and out of the river twice, and there was some clucking exchanged when he came out, probably because she was left to contend with the constant rats ducking in and out looking for a way to get at the egg.

“He seems anxious to be in the river.”

“ The water is the best place for them, safe from predators.”

“Plenty of rats on a river.”

“Oh look, the crack is getting bigger.”

Sure enough, every time Herself stood up, the crack looked a little larger.

“I can see it moving” someone getting excited now.”

“I’m going to be dead late back but I don’t care.”

Another cheeky rodent scurried close to the next but Herself was on to it and saw him off with a cool neck flick.

And then she stood up with uncharacteristic alarm, and we could see the feathers emerging.

A chick, about half the size of an adult palm, wriggled to free itself, as Herself, assisted by the now excited other little ones pecked at the remaining shell to hurry things up.

The river beckoned. In seconds, the shell was gone and what looked like a much of feathers lay exhausted on the nest.

Getting out of a shell is tough work. Meanwhile, himself was at the path again, ready to go in the water, gathering the little ones to him. Herself rolled the new arrival around a bit before waddling over to the rest of the family for a quick dip. And after much relieved sighing the audience went back to their normal activities. But I couldn’t move.

The new chick, all black and white striped, lay almost motionless except for the odd raising of hits head. I wondered about this. The family seemed quite happy to go off an swim.

Was this a no-hoper and Herself knew and abandoned it? Or did she leave it here to dry off in the sun?

It was the picture of frailty and vulnerability, and only its head lifted and dropped occasionally. I wondered if Herself had crushed its legs by accident? I was getting hungry but felt compelled to sit with it until the others came back in case I had to fend off the rats – even pigeons.

After a while, the guys returned all chirpy and excited after the adventure, and Herself went straight to check on the little one in the nest, and I headed home.

Last evening, I went back around to see how things worked out, and was ridiculously relieved to count FIVE little ones all now with the same grey feathers.I shouldn’t have been upset if it had been only four – for that meant maybe a happy event over in the Fox household would have a better chance.

Pics and video by Kate Kavanagh