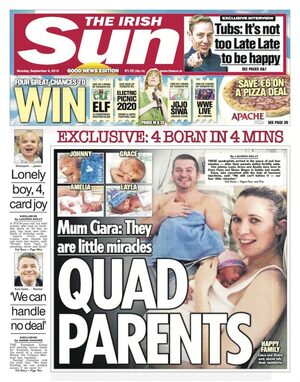 The Good news Edition of the Irish Sun 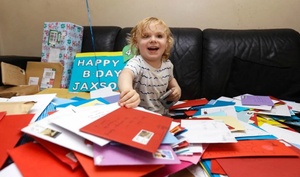 Strangers send birthday cards to a friendless four-year-old boy after his mother contacted the Irish Sun to say he hadn’t received any.

THEY’RE ALL 4 YOU! Dublin boy with ‘no friends’ celebrates 4th birthday with hundreds of cards from around world after special appeal (The Irish Sun) 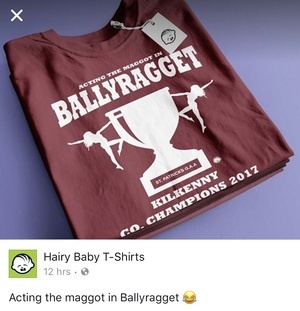 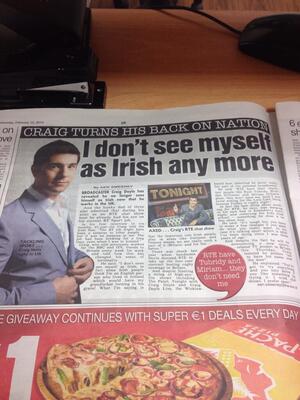 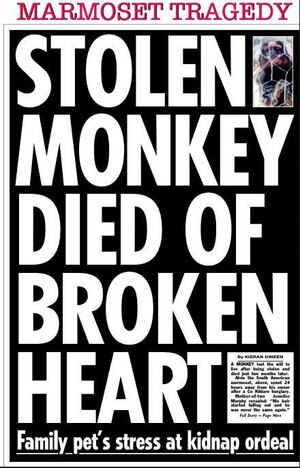 Last night’s preview of the Irish Sun on Tonight with Vincent Browne.

Previously: Monkey’s Off His Back

Marmoset Knock You Out 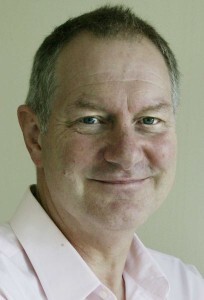 Paul Clarkson, (above) editor of The Irish Sun and Roy Greenslade, (top) media commentator and Guardian columnist discussed on Morning Ireland with Gavin Jennings the decision to omit topless shots from page 3.

It’s all a Protestant/Catholic thing, apparently.

Gavin Jennings: “When he says that “The Irish ain’t British” to quote you Paul and that there are cultural differences which are behind this decision, what do you understand by that?”

Roy Greenslade: “Well I can only think it’s a reference to ah religion em..”

Jennings: “Sorry, Paul is it?”

Greenslade: “It’s going to be very embarrassing in the Six Counties at the top of this country where there are lots and lots of people of a similar religion and they are still going to get Page 3 so I don’t know what the Sun is going to do about that? Em, it also is interesting isn’t it to suggest that em Protestants quite like having em Page 3 and Catholics don’t, rather interesting thing in the debate”

Jennings: “Paul, do you want to answer that?”

Paul Clarkson: “Well as I was trying to say it’s not really about religion. As I say, there is certainly a Catholic guilt in the Republic that people have grown up with but that’s only a small part…”

Jennings: “No Protestant guilt in the North, is that right?”

Clarkson: “No, but in the UK, especially our readers in Northern Ireland they’re very much more aligned to the UK paper and they actually are very, identify themselves strongly as British. As well, we’d have a much larger em sort of Protestant…”

Jennings: “So are you saying that strongly identifying yourself as British means that you’ve got less of a problem with topless pictures on Page 3, really?”

…The Dublin office has received a few phone calls inquiring about the change, but only one reader is understood to have demanded [Page 3’s] return. They’re learning on the job, etc.

They are literally unable to.