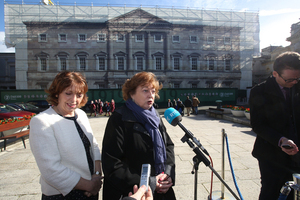 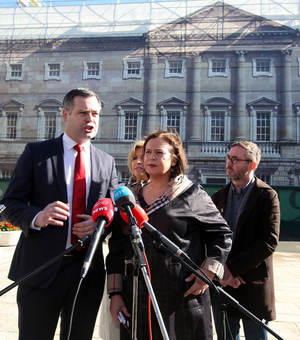 Catherine Murphy (right), with Roisin Shoirthall her co-leader in the Social Democrats, and Pearse Doherty (above left) with Sinn Féin colleagues from left: Rose Conway-Walsh, Mary Lou McDonald TD and Eoin Ó Broin TD speaking to the media after businessman Denis O’Brien lost his appeal to the Supreme Court over statements made in the Dáil about his banking affairs. 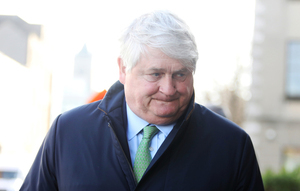 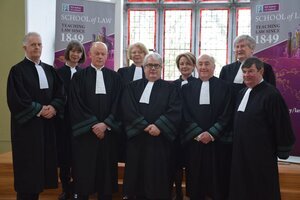 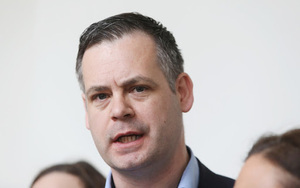 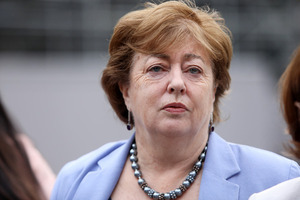 Obviously delighted with today’s Supreme Court ruling which reinforces decision of both CPP & High Court that myself & @PearseDoherty did NOT abuse parliamentary privilege.

Over the moon as Supreme Court dismisses Denis O’Brien’s appeal about comments made in the #Dail by myself and @cathmurphytd
Common sense prevails.

The Supreme Court (sitting in Galway).

Denis O’Brien has lost his Supreme Court challenge against a failed legal action in relation to statements made in the Dáil about his banking affairs.

The businessman claimed the two TDs in question were guilty of an “unwarranted interference” with the operation of the courts.

Mr O’Brien’s High Court action arose from remarks made by Sinn Féin’s Pearse Doherty and Social Democrats TD Catherine Murphy under privilege on the floor of the Dáil during a debate in 2015 about the sale of SiteServ.

By revealing details about his dealings with the IBRC, he claimed the two deputies effectively decided a separate case that was before the courts.

An injunction was in place at the time in relation to an RTÉ programme.

“The CPP found that I had not abused parliamentary privilege in making a speech which was very squarely within the public interest and that I acted in good faith at all times. I am pleased that both the High Court and now the Supreme Court have upheld that decision.

Whilst I am pleased that the courts have recognised the constitutional protections afforded to those of us who may find ourselves in the position of having to use parliamentary privilege for a matter of public interest, it is hugely incumbent on us, as elected representatives, to recognise that such privilege must only be exercised with great responsibility.

The public interest must always be to the fore and that is what has underpinned everything I have done to date.”

“If both the judgement against the Sunday Business Post and now against the House of the Oireachtas went the other way – there would be a serious chilling effect in relation to what could be said, both in the press and on the floor of the Dáil in future.

“So this judgement today makes it very, very clear, if anything good comes from this judgement: it is the fact that parliamentary privilege is sacrosanct, it cannot be tested before the courts.

“The decisions of the CPP in determining whether a deputy or a senator has abused parliamentary privilege cannot be tested before the courts. And that now clarifies it.

“And there’s an onus on us, as elected representatives, to use that privilege very, very selectively, in which we do. As I said, I had other information in relation to Denis O’Brien that I didn’t put on the public record.

“And indeed we have information that is given to us, and I welcome information like that, that is of a highly sensitive and confidential nature, that we decided not to put on the public record because it’s viewed by us not in the public interest and would be, in our view, an abuse of parliamentary privilege.”