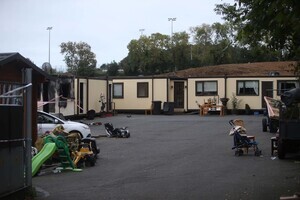 The halting site in Carrickmines, south Dublin, where a fire killed 10 members of the same Traveller family, one of whom was pregnant, in 2015

Ten members of the same Traveller family, including a pregnant woman, died in a fire at a halting site in Carrickmines, south Dublin, in October 2015.

An inquest into the deaths began this morning.

“An inquest has heard that the fire that killed ten people at a halting site in Carrickmines, Co Dublin, was caused by a chip pan.

“Detective Inspector Martin Creighton told the Dublin Coroners Court that the source of the blaze in 2015 was found to be an electric cooker in a mobile home at the Glenamuck halting site.

“He said that a chip pan had been left on a hot plate on the cooker.”

“…The council’s director of services Thomas McHugh said the Glenamuck halting site was a temporary emergency site provided in 2008 for families who were living at the side of the road.

“In answer to coroner Myra Cunninane, he said that temporary emergency sites were exempt from housing regulations including fire safety regulations.”