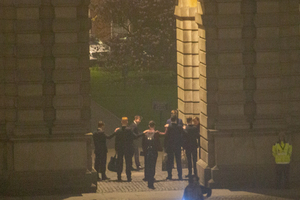 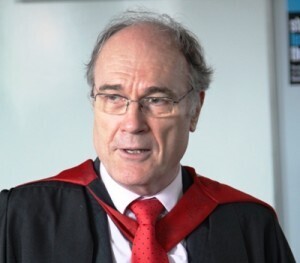 A referendum will take place at Trinity College Dublin in the final week of the current term where students will vote on the removal of The University Times‘ editor’s salary and a reduction in funding for the newspaper.

The University Times says if the referendum passes and the constitution of the Trinity College Dublin Students’ Union is changed, the newspaper will be allocated €3,000 a year for printing which would amount to covering just one newspaper issue a year.

The Hilary term at the college ends on Sunday, April 21.

This followed an article in the University Times about a hazing ceremony carried out on Trinity’s campus by the all-male sporting society, Knights of the Campanile.

The Trinity News editors took exception to the University Times’ reporters use of a recording device outside an apartment where the hazing ceremony was taking place to help obtain their story.

“Secret or secretive societies with limited, invitation-only membership with ritual initiation ceremonies and degrading humiliation of noviciates are a danger to the general public as they bring with them an unreasoning loyalty to a small group of people, usually an elite, often with a sex or class-based membership.

“Such unreasoning loyalty is already evident in some of the supporters of the Knights and emphasises the dangers of such societies.

“Because such groups are damaging to society generally, as they maintain the power and influence of that elite by exercising control and limiting membership, they are a suitable subject for newspapers and other media.

“It is perfectly acceptable journalism to use a tape recorder to record conversations that can be heard in a corridor.

“The overriding public interest is obvious, given that this is a high-profile society with a long history and large membership.

“Initiation rituals, (often called hazing in an attempt to disguise their true nature) of the type described have no place on a university campus.

“If those involved really are concerned about issues of journalistic ethics then a complaint should be made to the Irish Press Council, the appropriate body to investigate such an incident.

“Both the Trinity News and University Times subscribe to the Press Council of Ireland’s code. Principle 3 of the code of practice clearly recognises the use of subterfuge by journalists acting in the public interest and could have been asked to investigate this story.

“However, the newspaper’s opponents have attempted to block funding and close the newspaper, making it clear that closure is their aim, not a concern about ethics.

“This is an appalling attempt to curtail a free press, the thin end of a wedge the Irish media can ill afford to permit. Ireland is a country with a strong record on press freedom with a sound media regulatory system.

“As chair of the NUJ’s ethics council I condemn this attempt to gag the newspaper and promise the NUJ’s full support for a free press in Ireland, and indeed the rest of the world.”

Former Trinity student, DPhil candidate in Criminology, and law lecturer at Oxford University Cian Ó Concubhair has tweeted his thoughts on the events at Trinity…

Thread by @CianOConcubhair: “An unfortunate issue with some of the comment on this is that while we may not have a public interest defence for breach of privacy actions […]” 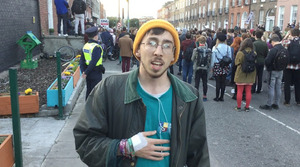 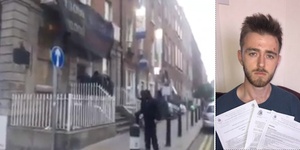 Four Trinity medical students were refused entry to Palestine’s West Bank this summer…The two male and two female students, who have asked to remain anonymous, returned to Dublin in late June after being detained for questioning in Tel Aviv. They were due to travel to the West Bank with Medical Overseas Voluntary Electives (MOVE), a Trinity-based charity that facilitates third year students wishing to complete a one-month placement abroad during the summer...

…Arriving in Tel Aviv in the early hours of 1st July, the students were stopped by airport customs officers who queried the purpose of their trip. “We told the truth,” our source said. In a letter to the students, seen by Trinity News, the PCRF confirmed that they were coming as a  “non-political humanitarian relief group.”  According to our source, he and his fellow students believed this would be sufficient proof of their motives. He said that it was routine practice for the PCRF to have foreign surgeons or doctors visit the hospital to carry out procedures or train the local staff.

However, the letter “aroused suspicion” among the customs officers and the students were led away for questioning. “We were put into a side room,” he said. “We probably spent about an hour in there. And we were called one by one for five to 10 minutes each just to give our details, our name, address, phone numbers, what our purpose was, what our parents’ names were and then we were sent back to the room.”

The volunteers were then led into a second waiting room, where one of the male students was taken away and questioned individually for, our source estimated, “45 minutes to an hour.” According to our source, this student was seated in a room with a two-way mirror and was subject to aggressive questioning with “a camera in his face.” His interrogator identified himself as an employee of the Ministry of the Interior and told the student that he was a “human lie detector.”

The student was questioned extensively about how the members of the group knew each other, his personal views of the Israeli-Palestinian conflict, their purpose for travelling to the West Bank and why they had chosen to volunteer in Palestine instead of in an Israeli hospital. Our source said the interrogator “wanted to know everything about me… what my parents do, if I am a member of any anti-democratic groups, and whether I was politically active… what my hobbies were.” The official tried to “get us to admit that we were going to Gaza, which of course we weren’t. You can’t get into Gaza via Israel – the border’s closed. You’d have to go via Egypt. We’d no intention of going to Gaza… He was just trying to provoke us, just trying to make us say something incriminating so that he could deport us.” 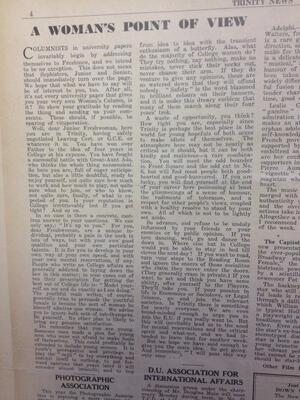 1953 issue, @Trinity_News: “Columnists begin by addressing themselves to Freshmen, and we intend to be no exception.” pic.twitter.com/YskbeEh9rm

Should have known her place. 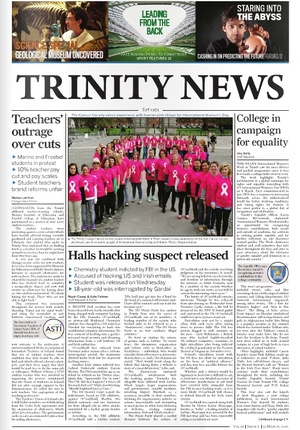 Further to legal threats by David Quiinn of the Iona Institute against two Trinity College newspapers.

On February 6th, 2013 we reported that David Quinn, head of Christian conservative think-tank the Iona Institute, had issued legal threats against The University Times over articles they had published the previous month. The news story can be read here.

On February 8th a lecturer in the Law School of Trinity College, Dublin, Dr. Eoin O’Dell, who is acting on our behalf in this case, informed us that Mr. Quinn’s solicitors had made contact in complaint at the article. This was followed by three solicitors’ letters in which Mr. Quinn’s representative made five demands in relation to the story: that it be retracted, that we issue an apology for its publication, that we offer Mr. Quinn a right-of-reply inside the next print edition, that we offer his representatives editorial oversight over a subsequent article on The University Times‘ settlement of their case, and that we make a contribution to Mr. Quinn’s legal costs in pursuing this case. We were unwilling to meet these demands.

In settlement we offered to correct a factual error contained in the article by means of clarification. Despite this offer being rejected we added this clarification in the interests of accuracy on the 11th of March: “This article initially stated that Mr. Quinn “contested” Google’s claim that the Iona Institute’s YouTube account was not closed for reasons of censorship. In fact, while he initially contested this, he later accepted that this was an “automatic procedure on their part“.”

On March 13th we also ran a news story on the University Times’ settlement with Mr. Quinn. This article can be read here. We did not give Mr. Quinn’s representatives editorial oversight over this article, but we did include reference to the clarification we added to the original news story.

We have encouraged Mr. Quinn and his representatives to pursue this matter through the Press Council but, at the time of writing, the threat of legal action remained outstanding.

Some details of this case were published by UCD student newspaper The College Tribune on April 1st.

Trinity News’ position is that we stand by our reporting and are prepared to defend it.

We Stand By Our Reporters (Editorial, Trinity News) 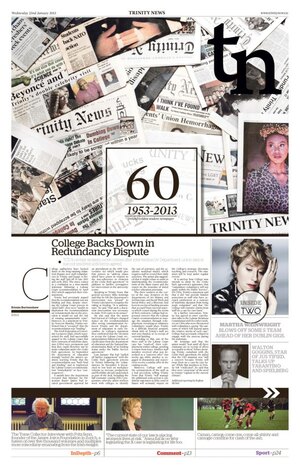 *flings mortar board in air* 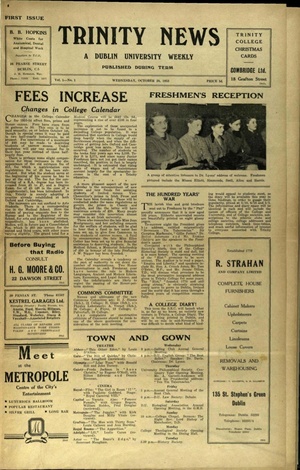 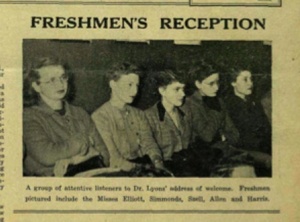