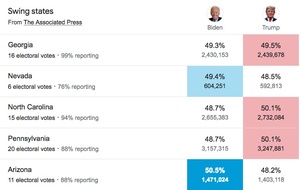 State of play in remaining swing states in the US Presidential Election as of 10.25pm

US Democrat Presidential candidate Joe Biden maintains his lead over US President Donald Trump as counting and, amid claims of massive voter fraud, lawsuits continue. 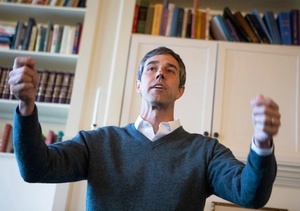 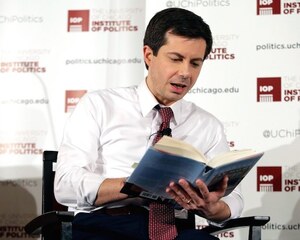 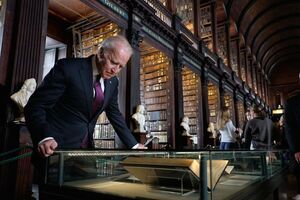 On the US campaign trail.

Via The New Yorker:

Beto O’Rourke comes to Joyce by way of Homer. Last April, he told a Texas radio interviewer that the Odyssey was “absolutely” his favorite book. He named his first child Ulysses—only, he has suggested, because he “didn’t have the balls to call him Odysseus.” That’s fine. Joyce, too, called his novel after the Latin rather than Greek name of the hero.

O’Rourke’s story starts to wobble, however, when you learn that his next child, a daughter, is named Molly, seemingly referring to Leopold Bloom’s wife—she of the twenty-four-thousand-word, eight-sentence, unpunctuated soliloquy that closes the novel. And his third child, another son, is named Henry. If you’re already in a “Ulysses” state of mind, you might recall that Leopold Bloom hides behind the nom de plume Henry Flower in his epistolary flirtation with the “lady typist” Martha Clifford….

…Pete Buttigieg’s Joyceolatry comes across as the best informed and the most authentic. I’ve known how to spell (if not how to pronounce) “Buttigieg” for a long time, because Mayor Pete’s father, Joseph A. Buttigieg, was a literary scholar who wrote a book about Joyce’s “A Portrait of the Artist as a Young Man.”

Taking that volume down from my shelf the other day, I saw that Buttigieg writes in the preface that “our son Peter Paul has contributed an uncommon measure of patience and tolerance” to the writing of the book. It was published in 1987, when Pete was five—patience and tolerance were no small thing.

…Joe Biden’s occasional references to Joyce over the years feel less strategic. He hasn’t been talking about Joyce as often of late—there have been other issues for him to address—though he has a habit of kicking around Joyce allusions like snuff at a wake….After seeing some of Joyce’s manuscripts in the Long Room at Trinity College, Dublin, in 2016, Biden called him “one of my favorite writers”

…But, given the controversy swirling around him, Biden should remember that “Ulysses” contains its own #MeToo movement, or at least moment. In the novel’s most vertiginous chapter, “Circe,” Bloom hallucinates a series of women accusing him of a wide range of forms of unwanted sexual attention