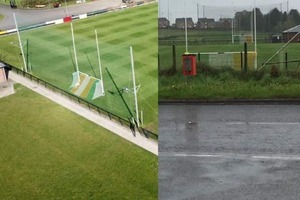 UUP MLA Doug Beattie had hit out at St Paul’s Gaelic Football Club for changing their netting to “depict the Irish Tricolour” and in doing so “marking out territory”.

Awkward own-goal, re: allowing parity of esteem in the north east of Ireland. This, from the “moderate” and “middle-ground” UUP…