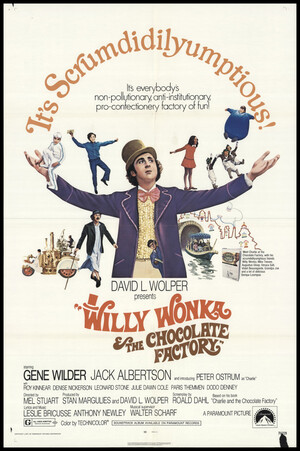 I don’t know if you or your readers are interested but today marks the 50th (yes 50th!!!) anniversary of the release of the amazing movie Willy Wonka & The Chocolate Factory (1971).

One of my favourite movies ever, Gene Wilder was born to play the role [of Wonka], considering it was 50 years ago the ‘special effects’ were way ahead of their time as in this clip above!

‘…the film honors Wonka’s antisocial, child-unfriendly coolness, to the point of leaving the fates of most of its young characters unresolved. (The book’s coda, detailing the kids’ survival, is excised from a rushed finale.) Yet it cushions him in starry-eyed romanticism, too, from the first bars of its signature song Candy Man, which posits Wonka as joy-spreading visionary who wants only to make the world taste good. Is he an idealist of pure imagination, or a canny commercial opportunist and coloniser of cultures? The film defused the NAACP-stoked controversy over the book’s racialised depiction of Wonka’s Oompa-Loompa workforce by making them orange-faced alien beings, but the sour taste remains.’

Willy Wonka and the Chocolate Factory at 50: a clunky film that Roald Dahl rightfully hated (Guy Lodge, The Guardian) A chill-hop reimagining of music and deftly re-edited scenes from Willy Wonka and the Chocolate Factory by Melodysheep, naturally starring the late, great Gene Wilder. He’s at it again.

To mark the 45th anniversary of the original Charlie and the Chocolate Factory, ‘sheet fave Steve Collender has done another movie re-edit, this time as a video for an underappreciated post-hardcore tune.

“The 1971 classic recut as a concept video, where the chocolate factory is a fantasy in Charlie’s head.”

Meanwhile, on Funeral for a Friend’s somehow still-inhabited social media (having broke up earlier this year)… 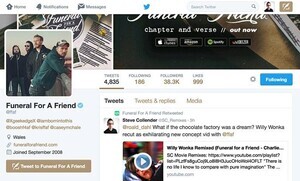 The children’s classic was re-released to cinemas in the States as a one-day only event yesterday. When that hair grows back, it won’t matter either way. That’s what you get when you steal Fizzy Lifting Drinks.

Culled from the short documentary Pure Imagination (watch it here) by redditor, wiuara.