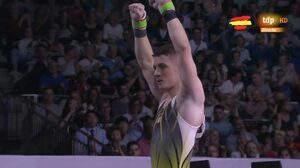 Rhys McClenaghan, 20, from Down, became the first Irish gymnast to win a medal at the World Championships after claiming a bronze in the pommel horse category in Stuttgart, Germany.

Rhys speaks to GymCastic after winning his medal. 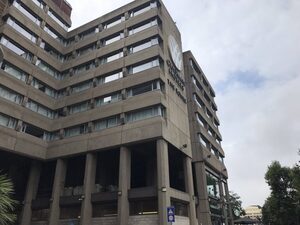 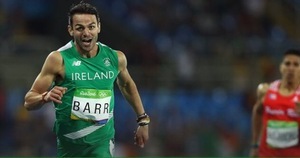 The world athletics championships being held in London has been hit by an outbreak of norovirus, health officials have confirmed.

Public Health England (PHE) said it had been notified of about 30 cases of people associated with the event, London 2017, falling ill; two of those have been confirmed by laboratory tests as having the vomiting bug.

…The Tower hotel told the BBC that investigations in conjunction with health officers and the International Association of Athletics Federations (IAAF) concluded the hotel was not the source of the illness.

“We have followed strict hygiene protocol, ensuring that those affected are not in contact with other guests and all public areas have been thoroughly sanitised,” the hotel said.

Botswana’s Isaac Makwala, a medal prospect in the 400m on Tuesday, was given medical dispensation to withdraw from the 200m heats after throwing up in the medical room.

Makwala would normally be scratched from the final after pulling out of another event. As he missed the heats on medical advice, however, he would be able to run, if fit.

A number of other athletes staying at the same hotel also have gastroenteritis, including the Ireland 400m hurdler Thomas Barr.

“I’m gutted to have to withdraw from the semi-final. My whole year has been focused on the world championships. To not be able to go out and compete for Ireland is beyond disappointing.”

The Irish race walkers are due to arrive on Thursday and plans are already in motion to try find alternative accommodation for them.

The reaction from the organisers has been swift and professional, though you do have to wonder what the response would be if this happened in Rio last year, where it seemed British media outlets were keen to jump on every little organisational imperfection.

Will they do the same when dozens of athletes’ championships have been ruined on their own turf?

Barr forced to withdraw due to illness (Athletics Ireland) 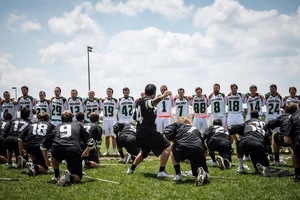 The Irish men’s lacrosse team faced their toughest challenge yet when they faced off against a Haka-pumped (above) New Zealand side in Thursday’s action at the World Lacrosse Championships in Denver.

“New Zealand controlled the first face-off and went straight to goal, but the shot was saved by Sweeney, who quickly cleared the ball back up field to Kris Prior who then buried a shot to put Ireland on the scoreboard first, 1-0. New Zealand quickly equalised however when the long-pole #10 headed straight down-field and scored to make it 1-1. A ding-dong ensued, first Tom Riley scored for Ireland to make it 2-2, followed by a New Zealand equaliser, then Mike McTernan scored his first goal of the day on a spinning jumpshot to make it 3-2. Ireland would then go on to score two more goals to make it 5-2 at the end of the first quarter. The Irish team continued to build on its small margin throughout the game, leading 8-3 at half-time and 11-6 at the end of the third quarter. But New Zealand are a team that plays to the final whistle, and they worked hard in the fourth quarter to reduce the deficit to just two goals (11-9) with just over 2 minutes left in the game. Ireland hung on and ran out 12-10 winners

Ireland will face the [gulp]  Germans in their final game of the tourney tonight. The game will be broadcast on ESPN3 here at MIDNIGHT (Irish time). 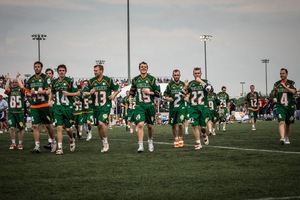 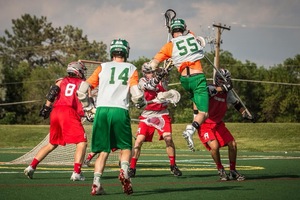 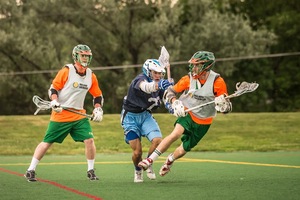 The Irish lacrosse team’s preparations for the World Championships ESCALATED yesterday as it took on Japan in a scrimmage held at Colorado Academy in the Lakewood section of Denver.

We played a friendly last night against Japan who are the top 5 ranked team in the World.  Kevin Owens, Tom Burke, Mike McTernan and Brian Gillis showed hot hands at the offensive end, notching a few goals between them. The Japanese responded in kind however by converting a number of opportunities, with the contest concluding with a victory for the Japanese by a single goal.  It was a tight game throughout though, which bodes well for an Irish team

The build up continues..

Previously: Many Rivers To Lacrosse