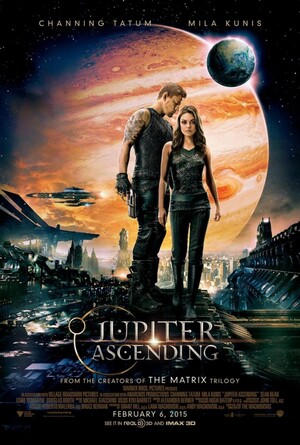 1. Jupiter (Mila Kunis) is a mild-mannered janitor (just like Hong Kong Phooey) destined for greatness. When Caine (Channing Tatum), a genetically engineered hunter arrives on earth, Jupiter discovers that she is heir to an inheritance that could alter the balance of the cosmos.

2. Does anyone else find this whole “Wachowski siblings” thing ridiculous? Surely “The Wachowskis” covers everything?

4. Poor Channing – looks like he’s playing with the double handicap of a ropey British accent and bad facial hair.

5. Jupiter Ascending was originally slated for release in July 2014 but Warner Bros pushed it back by seven months. Box office competition? Spongebob: Sponge out of Water.