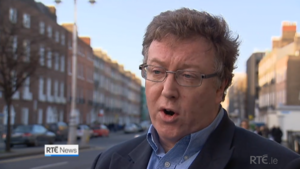 Paul Redmond of the Coalition of Mother and Baby Home Survivors

“Only about one third of the entire total of people who were separated as single mothers and children are being included in this inquiry. We need everyone included. And we need everyone to be immediately offered an acknowledgement, an apology and redress while there is still time for an ageing survivor community [of about 50,000] that is quite literally dying by the thousands every year.”

Further to this, Paul explained to Broadsheet:

“In the bad old days when the mother and baby homes were around, there was also an awful lot of people, in the very early days, who were born in county homes and they’ve been kind of vaguely looked at but as time progressed, an awful lot of people were born in maternity hospitals from, say, the Fifties onwards and they’re all completely excluded.”

“This is not a repeated [request] as such in that we asked, when we were kind of lobbying and meeting ministers to discuss the terms of reference for the inquiry, we actually wanted them to be about the issue of the separation of the single mothers and children since the foundation of the State but the problem was, as we discovered later, was that [Taoiseach] Enda Kenny, when he gave us a promise of an inquiry – this goes back to last June – after the Tuam story broke in June 2014, he promised an inquiry into mother and baby homes and basically the Government, when the realised how big this entire thing was, they literally had a conniption and decided, well, we promise a mother and baby home inquiry, that’s all we’re giving and nothing else. And no matter how hard we lobbied or what sort of case we put forward, it was always looking likely that they were going to restrict it down as much as possible and that’s exactly what they did.

Call to widen probe into mother and baby homes (RTE)

Previously: A Waste Of Copy And Paste

The Periodic Table Of Sexual Terminology

3 thoughts on “The Sin Of Omission”