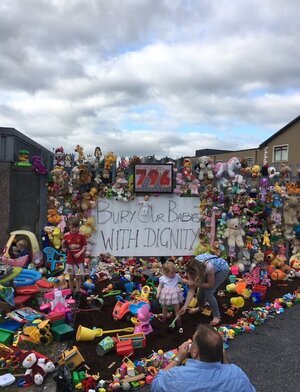 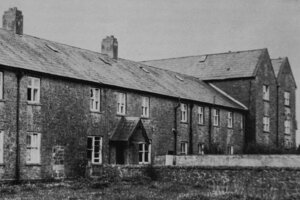 From top: A ceremony for the lost children of Tuam on Monday night; The Mother and Baby Home in Tuam, County Galway

Lawyer Kevin Higgins currently advises survivors of Mother and baby Homes in developing a “strategy to hopefully achieve some justice”.

Mr Higgins represented 73-year-old Peter Mulryan, chairperson of the Tuam Home Survivors’ Network, whose infant sister Marian Bridget Mulryan is believed to be among the 796 children recorded as having died at the Bon Secours mother and baby home in Tuam, Co Galway between 1925 and 1961.

He also previously said that the Attorney General has the power to order a coroner to hold inquests into the deaths of any remains exhumed at the Tuam site.

Over the past four years researching the Tuam mother and baby home, Mr Higgins has looked at the role of the home’s Chief Medical Officer, from when it opened in 1925 until 1950, Dr Thomas Bodkin Costello, whom Mr Higgins describes as a “local worthy, doctor, enthusiastic antiquarian and by popular acclaim, all-round ‘good egg'”.

Dr Costello was a physician to institutions such as the Royal Irish Constabulary, the Post Office and later the Civic Guard (An Garda Siochana) of the Irish Free State. He was elected President of the Old Tuam Society, a member of the Royal Irish Academy and the National Museum of Ireland has items from his personal collection. He was married to Senator Eileen Costello.

He was also friends with the first president of the Irish Free State and founder of the Gaelic League Douglas Hyde, and poet WB Yeats.

Mr Higgins found, of the 796 death certificates related to Tuam, which say starvation or marasmus is the certified cause of death in 14 cases, only two inquests are recorded – one in 1925 and another in 1928.

He also found there were only three post-mortem examinations – one in 1926, another in 1927 and a third in 1952, with the latter taking place after Dr Costello’s retirement.

Mr Higgins also found there is no evidence of Dr Costello having attended a single birth or death of a child at the home.

In a a heavily-researched piece outlining some of his research, Mr Higgins writes:

Dr Costello belonged to comfortable and deeply conservative Catholic middle class, which redirected Irish Nationalism in the years after 1916.

By the time the Irish Free State came into being, the revolutionaries, poets and dreamers were largely dead or quite literally outlawed and supressed with a ferocity that matched anything British imperialism had inflicted on the Irish populace.

What is chilling however, is Dr Costello’s statement during his time as medical attendant to the Tuam Home in giving his professional opinion, that there was nothing unusual in half of all children dying before the age of five.

From the very beginning the members of the “Local Board” which funded the Tuam Home were every bit as exercised as the Poor Law Guardians of the Workhouse had been about the cost of keeping children barely alive.

The Connacht Tribune report of October 13th 1928 captures the outrage of Board members at the cost of maintaining children in the Home and their almost apoplectic spasm at the cost to the State at keeping them alive until the age of fifteen when ‘boarded out’.

Luckily Dr Costello was available to provide reassurance that the children of the Home would not be such a burden on the public purse. The published report records him telling the members that it was the international norm that half of all children worldwide died before the age of five.

It may have been the case that Dr Costello was a little out of touch or simply complacent that the death rate among the Tuam children was during some periods, merely four or five times that of the national average. Whatever his reasoning, Dr Costello clearly did not have extravagant expectations for the children under his care.

Dr Thomas Bodkin Costello whatever his personal virtues and talents exhibited an appalling degree of indifference in respect of the death toll in the Home, though in fairness to him there is no evidence that there was even a ripple at the level of any office in local or national government at the evidence that children were certified as dying from starvation, or that it led to any intervention.

However, what emerges from even a cursory examination of the 796 Death Certificates for the children of the Home is very worrying. Where the specific causes of death are clustered and attributed to something such as measles they must be regarded as credible. Being highly contagious and at a time when treatment was poor, this is not unduly surprising.

Many of the apologist explanations for the death toll in Tuam point out that babies and infants were accommodated in poor and crowded conditions not uncommon at the time, where illnesses such a whooping cough virus could have been expected to run amok.

The “Home” did not provide for quarantine or isolation but let ‘nature’ take its course. Deaths from whooping cough are recorded at intervals in some small clusters, The incubation period of whooping cough is generally seven to ten days and we can agree that Dr Costello may have then correctly identified it, despite the fact that it occurs without fever or inflammation. There are secondary and third phases, to this historic killer, the last being one of recovery if the patient survives.

What jars is the certification of death on the same day of two young girls both described as four-and-a-half-years old (in an institution where over 79% of children did not survive to one year), almost certainly unvaccinated and having allegedly lingered with whooping cough for eight weeks.

Had they survived, the recuperation period could certainly have taken that time, but they did not and having reached the third stage, they would not have died from it. It may be some consolation to think that both are enjoying retirement in some sunny American state as a result of the child-trafficking business conducted by the Bon Secours, or not.

From the 5 of April 1926 to 30 April 1926 measles is recorded as taking the lives of eighteen children, some undoubtedly because they were unnecessarily exposed to the sickness that killed them. The dreadful practice of allowing children with communicable sicknesses to remain in unsegregated wards continued for decades and undoubtedly caused many further deaths. There is no evidence however to suggest that measles could not have taken such a toll.

What is a little surprising is the length of time Dr Costello appears to state that a child suffered from measles before succumbing to it. It is difficult to accept that a young infant could have fought measles for ten weeks before dying. It simply flies in the face of general medical knowledge.

While it raises another issue, the period which frequently elapsed between the date on which a child was said to have died and the date of registration of their deaths by the local Civil Registrar was well beyond the norm.

This among other factors raises an inference that the signing of Medical Certificates certifying cause of death was often done some considerable time after the fact of death, on information later supplied to Dr Costello, rather than on foot of his attendance and treatment of a child prior to, or at the time of death.

Prior to the examination of the half-yearly Registers, the ‘Local Board’ received no immediate notification of death, even after the enactment of the Registration of Maternity Homes Act 1934, which required it to be done within twenty-four hours.

In any such intervening period of course, the Bon Secours Order was paid a capitation fee for that child, who was deemed to be alive and in the Home. Fraud was the norm rather than the exception. This is transparently the case. Registration and the issue of a Death Certificate are often much later than the date of death. No audit, cross-referencing this documentation with the capitation fees paid to the Bon Secours was ever carried out by the State.

In writing his Medical Certificates certifying cause of death. Dr Costello could dazzle with his Latin terms: cause of death for instance varicella, which to the layman means chickenpox. Again a highly contagious disease in crowded and poor conditions.

Dr Costello however, in certifying it as the cause of one child’s death, seems to suggest that it lasted up to five months, before finally taking its life. It did not.

A child is certified as dying from sub-cutaneous abscesses almost half a century after it was practice to successfully drain such abscesses by means of one of the earlier versions of the Penrose-drain.

One slightly surprising aspect of the Tuam records is the lack of a single reference to polio or poliomyelitis as Dr Costello would undoubtedly have called it. The deplorable and unhygienic conditions endured by children in Tuam might have been a breeding ground for this awful disease. But perhaps it did not register on Dr Costello’s radar.

The first polio vaccine was not introduced to Ireland until 1957 delivered orally to children on a sugar lump. Whether any children of the Tuam home ever received it prior to its closure in 1961 in uncertain, but not a single death is recorded over thirty-six years.

The number of Death Certificates however, in which meningitis is given as either as the cause or contributory factor in a death, suggests that he may not have recognised instances of polio; meningitis frequently being caused by the onset of polio.

The outbreaks of polio in Ireland which are recorded during the period in which the Home operated, did cause significant loss of life (and indeed severe incapacity in later life for those who survived). It is a little surprising that an environment such as Tuam should have escaped.

A much favoured explanation of the cause of death by Dr Costello as the Certificates show was debility. It is stated to be the main or contributory cause in the deaths of 193 of the 796 or some 25% of the children registered as dying in the Home.

The figure of 193 is provided by the Report of the Inter-Departmental Committee Report of July 16 2014, published in the wake of public concern over revelations about Tuam.

In systematically going through the deaths registered from such a cause it is difficult to avoid the conclusion that this was little more than a label of convenience used to explain the deaths of so many children.

If we add to the numbers of those certified to have perished from ‘debility’ to those whose deaths are attributed to their being ‘congenital idiots’ and those certified as dying from starvation we arrive at a total of 221 deaths out of recorded 796 deaths.

There will be resentment in some quarters at this unflattering examination of a doctor who was such a significant figure in Tuam and somewhat iconic figure in Irish cultural circles and polite society. It might be said that such an appraisal is made with hindsight, unfairly and without regard to the realities of the time. Not true.