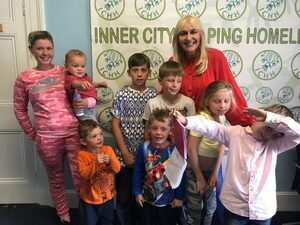 Homeless mum-of-seven Margaret Cash – who posted photographs of several of her children sleeping in Tallaght Garda station in Dublin last week – will move into a three-bedroom apartment in Dublin city centre on Friday.

“On Friday, we’ll have a three-bedroom apartment here in town somewhere for a week trial and then, after the week’s trial, it will be on a monthly basis so  I’m quite happy with that.

“It’s better news than what it was last week, when they were expecting me to go night by night again, so I am, I’m really happy.”

Ms Cash also told Ms O’Callaghan that, prior to last week, she had previously been referred to Garda stations on two occasions and that’s why she posted the pictures of her children sleeping in the station last week.

Anthony Flynn, of Inner City Helping Homeless – which has been paying for Ms Cash and her family’s accommodation since last week – wrote:

This morning @homelessDublin refunded the cost of accommodation we have paid of the last week. The process in doing this was as follows. DCC [Dublin City Council] rang the accommodation provider we engaged with last week, they asked them to refund ICHH [Inner City Helping Homeless] directly and they would then make payment. The accommodation provider immediately called me to discuss and ask for instruction as ICHH had originally made the booking.

I agreed for the provider to make the refund and charge Dublin City Council. The way in which this was done shows more complete contempt for the hard work and effort that ICHH do. Not making contact with us to discuss the issues or to work through the problems. All of the issues could have been dealt with last week if DCC had of worked with us instead of constantly working against us.

This isn’t the way the process should work, volunteer organisations are fundamentally important to support the charity sector. For five years ICHH have done so and have supported the most vulnerable and marginalised in society, statutory bodies ignoring those who are willing to help tackle a social crisis is absolutely wrong.

Change Nation? I Can’t Even Change My Phone