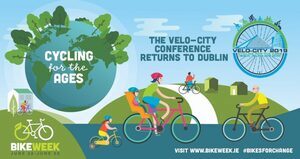 This week is National Bike Week.

In addition, Dublin is hosting the Velo-City Conference – the European Cyclists’ Federation (ECF) annual global cycling summit – having last hosted it in 2005.

Oh my god, that was quite an experience to get to @VelocitySeries by bike this morning! So many near-misses in such a short time! With this kind of infrastructure you have to be a warrior to get through! Still a long way to go for #Dublin for a #cycling4all City! @dublincycling

#Dublin seems to be a distinctive city: rough but symphathetic.
— But there is too much #car traffic. The city would be cosier if #walking and #cycling was prioritized. 🤔 #VC19 #smartmobility #cityplanning pic.twitter.com/vGvVYsIVyY

Cycled in 30+ cities, mostly in in Europe. Dublin definitely the worst for safe cycle provision. Even the best protected path along the banks of the River Liffey spits you out at random intervals into oncoming traffic

Congratulations @DubCityCouncil on making existing infrastructure even more confusing and dangerous than it was in an effort to impress the foreigners. That takes something truly special and surely shows the clueless approach to cycling safety & infrastructure in the city. #VC19 pic.twitter.com/v3GwDg8cFL

In case this photo isn't real enough for people, how about this video. I call it "Let's find the bike lane" #VC19 #cycledublin pic.twitter.com/JeThzQDnzr

Google HQ presenter: “we’re going to need Virtual Reality in Dublin for the next ten years because there’s no fucking infrastructure being built.” #vc19

The Cycle Lane Of Hell

Give Us A Brake