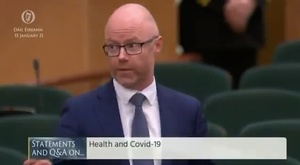 Is this parliamentarian language?

Particularly in a week when details of Fianna Fáils misogynistic attitude is being highlighted, for Stephen Donnelly to curse under his breath at the Ceann Comhairle Catherine Connelly…

Stephen Donnelly is an egg that lies pic.twitter.com/Y8Vpp3L0zi