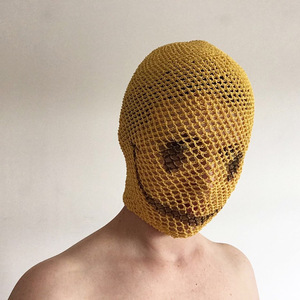 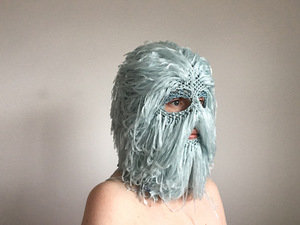 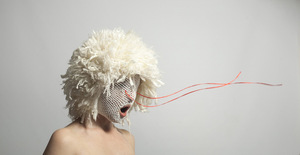 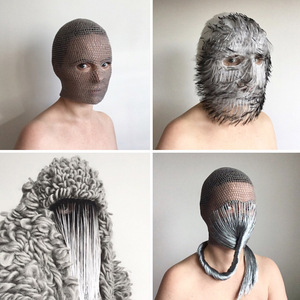 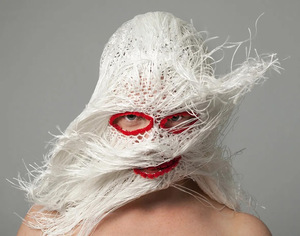 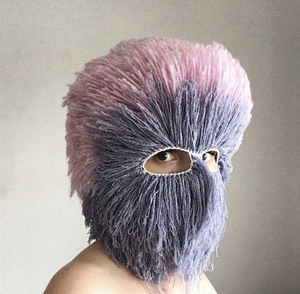 The work of Irish visual artist Threadstories – full-face, fringed and knotted, crocheted headpieces, the notion of which she sez:

…is questioning how the erosion of personal privacy in the digital age shapes how we view and portray ourselves online. The masks deny the viewer the full story of who the sitter is, echoing the curated or false personas we view online daily. My masks are photographed against a sanitised white square. I know there is often chaos, mess and noise just beyond the margins of that photograph, but the messiness of life doesn’t make the edit for social media.. 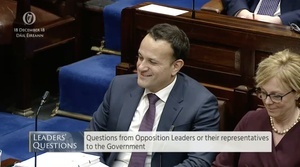 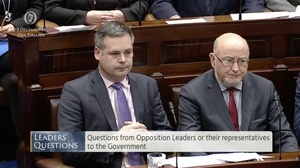 Uproar in the #Dáil.

@campaignforleo says when it comes to @sinnfeinireland and the rule of law it doesn’t take long for the balaclavas to slip. #RoscommonEviction #LQs pic.twitter.com/vwB0JDVoNv

From top: Pearse Doherty, of Sinn Féin; Taoiseach Leo Varadkar in the Dáil this afternoon

Taoiseach Leo Varadkar was responding to comments made by Sinn Féin TD Pearse Doherty about the recent eviction and subsequent events at a farmhouse near Strokestown, Co Roscommon.

He said the High Court doesn’t issue eviction orders lightly, and said 116,000 mortgages have been restructured while “only” 400 eviction orders were executed in the last year.

“No family, regardless of their circumstances, and it’s not the Revenue that are evicting them, regardless of their circumstances, should have been treated in this way. This idea that banks enforcers, these thugs, and I call them thugs, can enter into somebody’s property, can cut down locks, break down doors, can take somebody out by their ears, can kick somebody on the ground and push them out of their own home and property, while the guards watch on, is not acceptable.

“And we have raised this with you countless times and it is not just bank enforcers that are unregulated, we have rent receivers that is unregulated. Why are they doing this? And why is the public so outraged? And I commend the public for standing up in solidarity with the family and people who are facing eviction.

“And standing against the type of thuggish behaviour that we’ve seen last Tuesday. Why are they doing this? Because your government has completely abandoned these communities. You have rolled out the red carpet for the vulture funds, you’re allowing thousands of sales of restructured performing mortgages to take place of the vulture funds outside of the code of conduct of the Central Bank.

“And you have allowed, time and time again, the banks to ride rough shod over ordinary people. So Taoiseach, will you…ensure that this is the last time that unauthorised, unregulated bank henchmen will be entering property and behaving in the type of despicable way that we’ve seen in Roscommon last Tuesday?“

Mr Varadkar told Mr Doherty that he was “very concerned” that Mr Doherty “had nothing to say about what happened afterwards” – referring to events at the property on early Sunday morning.

At this point Mr Doherty started to respond to Mr Varadkar and the Leas Ceann Comhairle Pat “The Cope” Gallagher called for order.

The call for order went on for more than 30 seconds.

“Deputy, I condemn violence and thuggish behaviour by anyone, under any circumstances, so let there be no doubt about this. But in two contributions, in fact, in three contributions now, you have dismissed the fact that tax evasion is a serious offence.

Then the Taoiseach said:

“Deputy, deputy, when it comes to Sinn Féin and the rule of law, and public order, and condemning violence, it doesn’t take very long for your balaclava to slip.”

The Family Has Returned Home