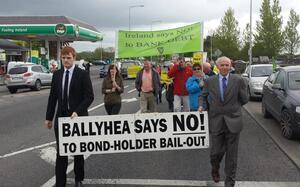 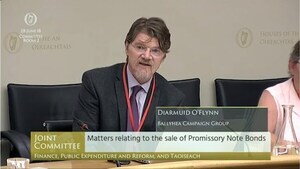 “When the history of this ignoble little era is written, Ballyhea will be a byword for honour.”

Diarmuid O’Flynn (top addressing the Joint Finance Committee last June), of the Ballyhea Says No campaign group, joined us LIVE streaming above and on our YouTube channel.

Diarmuid, a former sportswriter, has been leading an anti-austerity march in Ballyhea, in north County Cork, since March  6, 2011. In 2014, he was appointed a parliamentary assistant to Luke ‘Ming’ Flanagan MEP.

I spoke in last nights debate on the rights of Irish citizens to vote when living abroad. #HomeToVote pic.twitter.com/QujMJrcGQm

As discussed during the interview.

The right to choose. 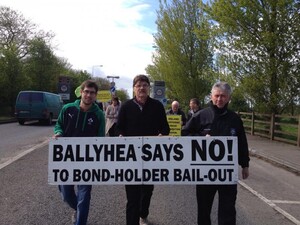 In response to questions posed by the Life Institute on the issue of abortion, we asked European election candidate for Ireland South, Diarmuid O’Flynn (61) if the quotes attributed to him were correct.

The questions and his replies were as follows:

1. Do you support the repeal of the legislation which permits abortion on suicide grounds, and support making Ireland a place where unborn children are legally protected and mothers get all necessary life-saving treatment in pregnancy?

2. Will you oppose measures in the European Parliament which seek to liberalise Ireland’s abortion laws and support pro-life measures such as the One of Us campaign?

“On a purely personal level I disagree with that particular legislation and the suicide clause but as stated in the original mail, it is not a European issue, it is a national issue.

The second, absolutely I would oppose any such measures. There are some questions that are for a nation to decide for itself; this is one.”

@LarsBiscuits Yes. I believe there are certain issues that should be for the individual conscience; that’s one, that’s my personal belief.

He subsequently followed up with a blogpost this morning on the subject:

The ugliest word in the dictionary…The only occasion on which I can foresee abortion arising in the EU is as an equal rights/civil right issue. I would vigorously oppose any such imposition on Ireland. Abortion is an area in which we should remain sovereign; this is an issue for Ireland to decide, on its own.

There is life in a foetus, helpless life that needs nourishing and protection. Everything possible should be done to bring that life to the birth stage.

Even for the most stable, mentally strong woman, abortion is surely a highly emotive decision. A suicidal prospective mother is already suffering serious emotional stress. An abortion will add to that stress.

It’s a lose/lose scenario, a most divisive argument and for very obvious reasons. But there it is. I know that in a situation where I’m going to need every vote I can get this will cost me but given that I’m coming out of nowhere I believe it’s only right people should know who I am.

At Dublin Airport, slightly baffled; small campaign group getting to meet the most influential EC person in relation to Ireland – not news? 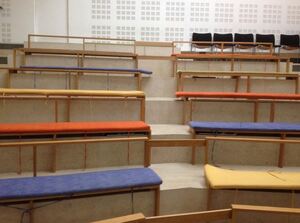 The ‘Ballyhea Says No’ group are holding a press conference in the Dáil  audio visual room to outline bank-debt writedown proposals.