Priests should not baptise children whose parents are just trying to get them into better schools, the Archbishop of Dublin [Diarmuid Martin] has said.

…”It’s [just] not this baptismal certificate – it’s a religious … entry into the life of the church, and to baptise somebody for any other reasons is wrong.

“Parents, you know, shouldn’t be presenting children to be baptised in that way – but priests shouldn’t be doing it either.”

Archbishop: Priests should not baptise children just to help with admission to schools (Breakingnews.ie)

Educate And Party Together

Dear Enda, will these extra school places be available to all or just kids who pretend they’ve been baptised? pic.twitter.com/iAWuKnY56O

Previously: The Tracks Of Our Tears Barrister Patrick Monahan and David Quinn, of the Iona Institute, spoke with Keelin Shanley this morning on RTÉ Radio One about how children who are not baptised in the Catholic church are being refused access to schools across Ireland.

In relation to this, Mr Monahan is calling for Section 7 (3) C of the Equal Status Act 2010 to be abolished. He has set up a petition which currently has more than 13,000 signatures and he will be bring it before the Oireachtas petitions committee in September.

David Quinn: “The Department of Education did a survey of parents in about 43 areas in the country, involving more than 200 schools and found that the average level of demand among parents for a different type of school was about 8%, resulting in a request that about 28 of these schools, in these 43 areas, as I say involving more that 200 schools, be handed over to bodies like Educate Together. I mean that says two things: that there’s a certain level of demand for a handover of schools but there’s a level of demand being exaggerated too because when the Department of Education survey was done and found, the average level of demand was 8%.”

Keelin Shanley: “There is another argument there, that when you ask parents and kids are in a school, everything is going fine. You ask them do they want to change it, they kind of go, ‘well, things are OK, you know, it’s not the same as…”

Shanley: “Let me bring in Patrick Monahan in on this. It would seem from what David’s saying there, he’s totally open to the idea of a certain number of schools divesting.”

Patrick Monahan: “It would seem so and I’m not here to talk about divestment. I’m here to talk about schools turning away children who don’t have baptism certificates. Divestment is a red herring and if I hear it mentioned again I think my head might explode. There has been no divestment. I don’t actually want divestment particularly. I mean divestment is fine for people who want non-religious education. I just want my child to get in to the local school so I started a petition, the petition now has 13,000 signatures in the space of two months. I’m not part of any organisation or any party. Basically, I’ll just give you a brief rundown of it. I live two minutes from our local national school. It happens to be a Catholic-run school. As you said, over 90% of the schools in the country are Catholic-run. Now they’re all taxpayer-funded. The teachers are paid for by taxpayers, the janitor, the upkeep of the school, the building programme for the school, all paid for by taxpayers. But as things stand my local school is oversubscribed so Irish law – this has nothing to do with the Church and nothing to do with divestment, I  don’t want to build a school and I’m sick of people saying to me, ‘why don’t you build…?’. I’m not a builder, I’m a lawyer. I want my child to go to the school that’s two minutes away.”

Shanley: “Why can’t your child get into that oversubscribed school?”

Monahan: “So. Section 7 (3) C of the Equal Status Act 2000, it could be called the ‘Catholics First’ law given that it applies to over 90% of schools. That section allows schools to discriminate on the basis of whether or not the child is baptised. If a child… basically Catholic schools throughout the country must have an enrolment policy and I beg anyone to look at their local school’s enrolment policy. That policy will say, ‘Number one, local Catholic children’. Then, more than likely it will say, ‘Number two, Catholic children from anywhere else should they need a school’. And the, under a category called ‘Other’, into which my gorgeous little five-month-old child falls. He falls into the Other category when it comes to the school two  minutes from my house. I don’t want to build a school, I don’t want to drive a half an hour to an Educate Together school which is very good if want non-religious education. I want my child to go to the local school with his friends from the GAA club and his road… that’s all I want.”

Shanley: “Just to clarify so this Section 7(3) C of the Equal Status Act…”

Shanley: “So you don’t mind if your child goes to a Catholic-ethos school, you just want to be allowed to be undiscriminated against in getting into the school.”

Monahan: “Stop discrimination and allow all children into local schools.”

Shanley: “Can I ask, this Section 7(3) C,  does it apply to anything other than schools?”

Monahan: “That’s a very good question. Section 7(3) C only applies to schools. The funny thing is it’s the Equal Status Act. The Equal Status Act sets out lots of types of discrimination that are not allowed. The Act says in one part, religious discrimination in schools is not allowed but it makes an exception for religious-run schools – which are around about 98% of schools so you can see the problem there.”

Quinn: “If there’s oversubscription in a given area, there’s going to be a certain number of children who are going to lose out and so the answer to that, first and foremost, is provide enough places because no matter what…”

Quinn: “Yeah but  you’re still going to have to have some kind of selection criteria. Now let’s say it’s first-come first-served all right? And we’ll say there’s oversubscription in a given area because there’s this overcrowding in the schools and you have first-come first-served. So somebody puts their child’s name down when their child is a baby and they’re well settled in the area. Somebody comes into the area and their child is four and the school’s already booked out for several years back. So even first-come first-served, it produces losers. So the idea is just make sure there’s enough school places in a given area and these problems simply don’t arise Just make sure there If there’s enough school places…it makes sense for a school to give priority to the parents who believe in the ethos of the school because the school is set up for a particular reason…Discrimination is an extremely loaded word.”

Monahan: “An oversubscribed school needs selection criteria. However that the number one criterion should be whether or not a child has had its head wet is insane.”

Monahan: “No, no David, please don’t interrupt, I didn’t interrupt you. One moment. David is suggesting the schools need enrolment criteria. Obviously. If 400 people apply to a school and there are only 200 places, they need to have criteria on which to decide whether or not to allow a child in. Now to me, things like catchment area, whether or not the child has already had siblings in a school, these things make a certain amount of sense and can be worked on. There has to be sensible, predictable criteria. Now whether a child is baptised or not, it’s predictable but it’s not exactly fair.”

Monahan: “David is the first person, honestly, that I’ve met that opposes this. You know. I mean we’re talking about four-year-olds here.”

Quinn: “Your circles of friends aren’t wide enough then.”

Quinn: “What’s your evidence of that? Except for having anecdotal evidence. Come on, please, give me a break.”

Shanley: “And what’s your evidence David?”

Quinn: “Well I mean, the baptism, if there was a big rebellion against the type of school system we have, we would have seen it in the Department of Education survey of those 43 areas.”

Shanley: “Specifically, what’s your evidence that Catholics would oppose the removal of this section…”

Quinn: “My evidence…if there was a groundswell of opinion against what schools are doing now it would have been reflected in the Department of Education survey and it wasn’t.”

Shanley: “And it wasn’t. Ok. Patrick that’s a fair point?”

Monahan: “Yeah. I’m a dad, I’m not a part of any organisation. I’m absolutely on my own on this. I started a petition about six or seven weeks ago, it’s got 13,000 signatures and growing, David. That is evidence that people want this law repealed..”

Quinn: “Why wasn’t there more of a rebellion against the current situation when the Department of Eduction ran that survey?”

Monahan: “Was the question asked – should this to be repealed?”

Monahan: “David just asked me why was it that in that survey that a groundswell of people didn’t support this. I’ve one question for David, was that question asked?”

Quinn: “If there was general dissatisfaction with what’s happening now, it would have been reflected in that Department of Education survey.”

Monahan: “And I think if you ask people, do you think children should have equal access to school, children should be allowed, regardless of their religion or should we discriminate against unbaptised children, I think they will go for the former option.”

Quinn: “I think if you loaded the question that way, you would certainly get the answer…”

Monahan: “Well how do you load it David?”

Quinn: “A question I would ask is, should schools be able to favour those who back the ethos of the school?”

Monahan: “Discriminate, in other words?”

Shanley: “OK, listen we’re going to leave it there. Just very briefly, Patrick, what are you going to do about your son? You’re not going to have him baptised.”

Monahan: “He is going to go to the local school. There’s 13,000 signatures on the list. It’s going before the Oireachtas petitions committee in September. I’m going to put it to them. I’m hoping that the Educations (Admissions to School) Bill 2015 will be amended so that this repeal will go through.”

Quinn: “[inaudible]…the Constitution, to do it.”

Shanley: “You know what, we’re going to leave it here.” 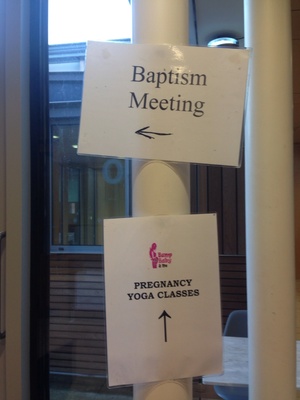 Do not pass go. A billboard campaign launched today by The Humanist Association of Ireland

Look at the happy scripture-free head on her.

Can I ask your readers one question: Do you believe all Irish children should have an equal right to education? Please answer here [and elaborate if possible below] …

The Humanist Association of Ireland