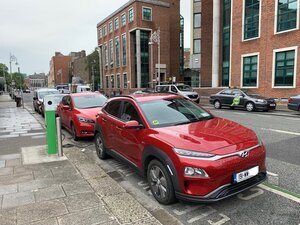 Not just an ICE problem. Indeed it seems neither EV is actually charging.

Sign of the times…Electric car charger at Lidl Swords exclusive to Tesla owners. 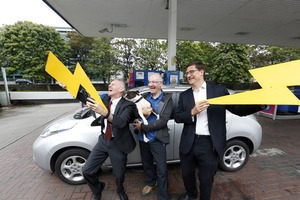 The launch of the Green Party’s Electric Vehicles (EV) Campaign and drivers’ survey which found  that 38% of them are “concerned about the lack of charging points”.

“It’s up to the Government to provide charging points so that issue of range anxiety becomes a thing of the past,”

Mr Ryan added that “incentives for diesel cars” should also be scrapped “making the excise duty on diesel equal to that on petrol”.

Walking along Mill Street I was wondering why oncoming cars were flashing their lights and a cyclist was forced onto the footpath….The driver of a ESB electric Mitsubishi iMiEV was driving against the oncoming traffic up a one way street. They had two opportunities to safely do a three point turn but at each occasion of pulling in, they continued on their way finishing with an illegal right turn at the end of the road.
These cars are virtually silent and one individual wearing ear buds attempted to cross the road, correctly watching the road expecting the traffic approaching from the right. They weren’t looking out for a car illegally driving up the one Way Street on their left….they narrowly missed stepping out into the path of car. 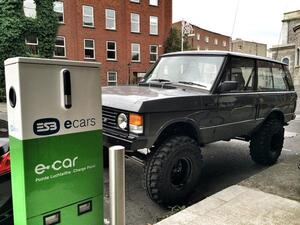