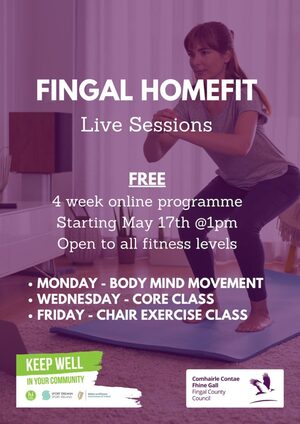 We are facilitating another FREE, online 4-week Homefit Live programme starting Monday May 17, due to the incredible uptake of 2,500 participants registered for the HomeFit programmes to date.

These free, online classes are open to all levels of ability and will be 30–40-minute fitness sessions delivered by qualified coaches.

There will be three classes a week delivered live online at 1pm and include a Body Mind Movement, Core and Chair Exercise class. 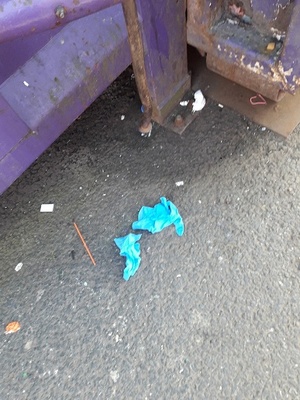 Please be advised that surgical gloves are not recyclable. When visiting our recycling centres please take them home and dispose of them with your normal refuse.

Please do not put them in the recycling containers there or leave them on the ground for our staff to clear up.

Same message applies for carparks of shops. Take your dirty gloves home with you and dispose of them in the bin, or if there is a waste bin in the car park use that.

Taking the gloves off correctly will contain any contaminates safely inside. #COVID19Ireland https://t.co/vOnzSm8Plq

Still happening at my local supermarket – customers loading up their cars, and chucking their latex gloves on the ground. The bin is a few metres away. Don’t get it… #COVID19 pic.twitter.com/0WnKuQ9TY1 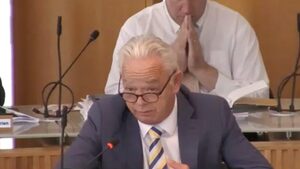 Independent Cllr for Howth-Malahide Jimmy Guerin – the brother of the late journalist Veronica Guerin – made a seven-minute address to the council in relation to journalist and presidential hopeful Gemma O’Doherty, for which he received applause.

It follows Ms O’Doherty telling people present at a recent anti-corruption meeting in Waterford that she believed there was state collusion in the murder of Ms Guerin.

At the outset of his address, Cllr Guerin said Ms O’Doherty’s comments were “hurtful”, “offensive” and “disgusting”.

“For the record, and to be very clear, there was never one cent, let alone €10million found in my shed. And to be very honest, if there was, I’d probably be lying in the sun now, missing you all.

“But it is something that needs to be addressed. In 2014, April, a lock-up, one of seven small units in the building that was owned by me was let out. When a tenant left, the cleaners went in and discovered 43 boxes of large sheets of paper that appeared to be used in an attempt to print money.

“Had it been finished, it could have produced €3.3million. However, it was unfinished. As soon as we became aware we notified the gardai, an arrest was made, the person was prosecuted, subsequently pleaded guilty to the charge and was sentenced by the court on the 2nd of March, 2015.

“Therein lies the basis of Ms O’Doherty’s allegation that €10million was found in my shed. And if it were my shed, my garden is five miles long.

“And this week, I read on social media, from supporters of Ms O’Doherty, the gardai placed the €10million there to compromise me, others claimed it was an inducement to keep me quiet about Veronica’s death.

“It was also stated by Ms O’Doherty in Clare chamber, and on social media, that I was a bully. People can judge that, some might agree.

“But I do find it offensive and I reject it. And I also find it ironic because I was responsible, with the help of Chief Executive and the staff of introducing the anti-bullying institute schemes for primary schools in seven of the schools in Fingal. And when the money ran out, I undertook and have, over the last week, along with [his wife] Louann successfully raised, I think we had a target of €15,000, we’re at €13,000, so as every other school who applied in Fingal could be facilitated and that’s why I find it hard.

“And I’ve reasons to hate bullies and to be opposed to it.

“Now, as I’ve said, I can defend myself but you see, no one can libel the dead, people can say what they wish.

“And it’s 22 years since Veronica was brutally murdered. Time doesn’t make it easier but it hurts when a presidential candidate, who in my view is going nowhere, for cheap publicity, tries to speak ill of my sister and make unfounded allegations against her and this state.

“And I can speak probably better than most with authority on this matter. Not just because I’m her brother but because myself and Louann spent years, day in and day out, and we attended each and every one of Veronica’s trials. And we did that because we wanted to learn the truth.

“Because the truth is important to victims.

“So these hurtful, poisonous, unfounded allegations that Ms O’Doherty makes insult not only Veronica’s memory but the many gardai who literally put their lives on the line and challenge the gangs that were responsible for her killing.

“She was murdered because she wasn’t prepared to be bullied by John Gilligan into dropping charges against him for a most vicious assault which would have ended in his drug empire collapsing.

“They’re the facts, I know that and I’m satisfied with that. And in 22 years, there are only two people that I have come across that say John Gilligan was not responsible for arranging Veronica’s murder.

“One is John Gilligan, the second is Gemma O’Doherty.

“I always ignored John Gilligan – he’s not worthy of it. For years, I ignored Ms O’Doherty. But now that she’s seeking a nomination to be president, it makes it all the more difficult to do.

“And I know for a number of years she has been obsessed with Veronica. I’ve seen the emails and they too are hurtful. But it’s when it’s brought into the public domain, it’s really hurtful.

“And you know I didn’t want to be coming here today and taking up your time and addressing this subject and it’s not easy but I would rather Ms O’Doherty found something else to use to get publicity. There’s no conspiracy, no State involvement.

“And I would ask her to allow my sister rest in peace.”