Even Catholics are welcome. The ‘cliff walk’ between Greystones and Bray, Co. Wicklow, today.

Even when it’s cloudy Ireland is magic. In 1969 the man born Jerome Silberman took a walk through the Burnaby.

There are, of course, many, many fine houses in that particular part of Greystones, but one house in particular caught Gene Wilder’s eye.

And so, being a confident-verging-on-cocky young Hollywood star – The Producers had proven the big hit of 1967 – Gene Wilder walked up to the front door and knocked.

A rather surprised Mr O’Farrell answered.

“Oh, I was just admiring your house,” replied Wilder. “It’s very, very beautiful. And I’d like to rent it.”

“Oh, but it would only be for three months. I’m shooting a movie in Dublin, and I just need somewhere to stay temporarily. And your house would just be perfect.”

“Are you mad? It is, indeed, perfect. And that’s why we plan to stay in it. All the time.”

“But surely we could come to some arrangement…?”

“Well, I’m sure you Hollywood types normally get your way in such dealings, but you’re far from Hollywood now. You’re in Greystones.”

“Look, perhaps we could go inside, and I can make you a simple offer. It would be crude to talk money out on the doorstep like this…”

And so, family lore has it, Gene Wilder and Mr O’Farrell went inside, to see just how much money this big Hollywood star had in mind when it came to renting the family home for six months.

Shortly afterwards, the O’Farrells went to stay with relatives for three months, whilst Gene Wilder went and spent his days shooting Quackser Fortune Has A Cousin In The Bronx, and his nights sleeping in Knockbawn, right here in sunny Greystones….

Joker Wilder Had A Hideaway In The Burnaby (GreystonesGuide.ie) 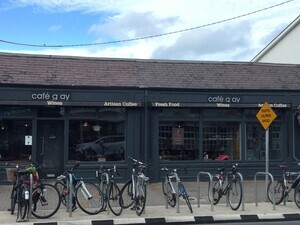 The Caroline Foundation in partnership with Bray Cancer Support Centre and Greystones Cancer Support need your help for an exciting world record challenge.

Helen from The Caroline Foundation writes:

A system is being set up involving 100 individual ‘cells’ or groups – hopefully Greystones and Bray residents but also CCRT patients and families. Each cell leader will have responsibility for bringing 40 people to line the route. Each ribbon holder will be asked to donate €10 – that means that each cell will contribute a minimum of € 400.

If you would be interested in setting up a ‘cell’ or joining a ‘cell’ please contact Helen O’Sullivan-Dwyer (helen@thecarolinefoundation.com)