Ahead of this weekend’s voting, President Emmanuel Macron and rival Marine Le Pen held an acrimonious telly debate where they clashed over relations with Russia, the Islamic headscarf and the jab.

The most explosive clash came when Le Pen confirmed she was sticking to her controversial policy of banning the wearing of the Islamic headscarf by women in public, describing it as a “uniform imposed by Islamists”.

Macron responded: “You are going to cause a civil war if you do that. I say this sincerely.”

She also vowed to put an end to “anarchic and massive” immigration into France, claiming it was worsening crime which she said was becoming “unbearable” for people all over the country.

Marine Le Pen wants to “reinstate suspended caregivers” who were fired during Covid for being unjabbed and “return the salaries they were deprived of.” pic.twitter.com/O5P5fjrSXV 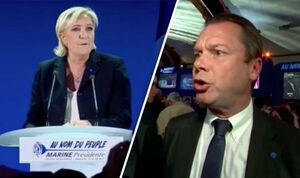 With four candidates within 3% of one another in the polls, France’s presidential election remains volatile. The two most dramatic statistics frequently ignored in the past few weeks, however, are the high level of undecided voters (as much as one third) and those who say they won’t vote (about 28% in a country where 80% turnouts are the norm).

All this, together with the tragic shooting of a policeman in central Paris just days before voting make this easily the toughest French presidential election to call in the history of the 5th republic.

A year ago, many pundits would have said the election of Marine Le Pen as president was considerably more likely than that of Donald Trump or a vote for Brexit and she has done her best to make the most of these two events.

Her campaign has been scandal-ridden from the off with allegations of misappropriation of funds from the European Parliament to loan agreements with those close to the Kremlin in Russia. Despite all this, and despite her party’s poor record in other recent elections (the FN was expected to make breakthroughs in the most recent regional elections but failed) she is still the woman to beat.

If she wins, France’s place in the euro and the EU itself are both very much up for discussion and without France, the continued existence of both is unlikely.

Her main rival began this campaign as an outsider, but as a man who fell in love with, then subsequently married his secondary school French teacher, Emmanuel Macron is used to overcoming the odds.

Apart from a brief stint as economy minister under President Hollande he has no government experience. He left government to set up his own centrist, grassroots, staunchly pro-EU political movement, “En Marche” which has since gone from strength to strength. He now has a strong chance of meeting it through to the 2nd round.

Another candidate firing up his party base is veteran left winger Jean-Luc Mélenchon- who is perhaps best described as a French Bernie Sanders. Like Sanders, he has been drawing big numbers to rallies recently – even to ones where he appears by hologram. Though turnout with the far left is always an issue and most polls have him a few points behind he cannot be ruled out from getting through on Sunday.

The early favourite for this contest was the centre-right’s Francois Fillon who saw poll numbers tumble when it emerged he may have been paying his wife around half a million euro a year to do more or less nothing.

Despite this fall from grace, he is still hovering around 20% in polls, doing very well among the over 60s and Catholics (two groups with consistently high turnout) and benefits from a well-resourced campaign. Staunchly opposing adoption rights for same sex couples and in favour of limiting immigration and stronger relations with Russia, Fillon can be described as being on the right of his own party.

One of the main advantages Fillon would have over his rivals if he were elected is the ability to form a Parliamentary majority after the election. Officially speaking at least, none of the other three can count on more than a handful of MPs in the Assemblee Nationale.

The legislative elections that happen within a few weeks of the second round of the presidential election are bound to give the incumbent a boost but it would be highly unlikely that any of these three movements came close to an outright majority. Fillon himself has his rivals in his own party and may not always get his own way in Parliament.

We can say therefore that the next President of France is likely to be a weak figure whose tenure may change the relationship between Parliament and Presidency for the foreseeable future.

Update: Emmanuel Macron and Marine Le Pen estimated to be through to second round (Guardian)