Ombudsman Peter Tyndall published a report on the complaints his office has received from people living in Direct Provision.

In relation to the lack of self-cooking facilities in direct provision centres, Mr Tyndall said these facilities will be rolled out this year.

But he can’t say when.

In my previous commentary I said that residents’ feedback to my staff was that their ability, or inability, to cook their own meals was the single most important issue for them.

Based on the feedback from residents to my staff in 2018, this largely remains the case.

My staff heard strong expressions of frustration from residents at some centres where self-cooking facilities are not in place or where the facilities are in the process of being provided but where there have been, and continue to be, delays in the provision process.

On the other hand, there are a number of centres which superficially appear to have very limited self-cooking facilities (eight hobs in one centre).

However, both management and residents at that centre told my staff that there was enough self-cooking to satisfy residents’ needs and there were never any problems with residents accessing the facilities that were there whenever they wanted to.

My office has engaged with RIA on this point which has confirmed that the Department has started a procurement programme for Direct Provision accommodation which will be rolled out on a regional basis by the end of 2019.

As part of the specifications for the competitions, tenderers will be asked to provide cooking facilities for residents.

Successful tenderers will have up to 16 weeks to provide those facilities from when they are notified that they have been successful.

RIA states that it is not possible at this stage to provide a timetable for when individual centres will have the cooking facilities rolled out.

This is because of the roll-out of multiple regional competitions and also because some providers may be able to deliver the required services in less than the full 16 weeks.

My staff will continue to engage with RIA on this programme over the course of 2019 and will see for themselves what progress is being made
when they visit the relevant centres during the year. 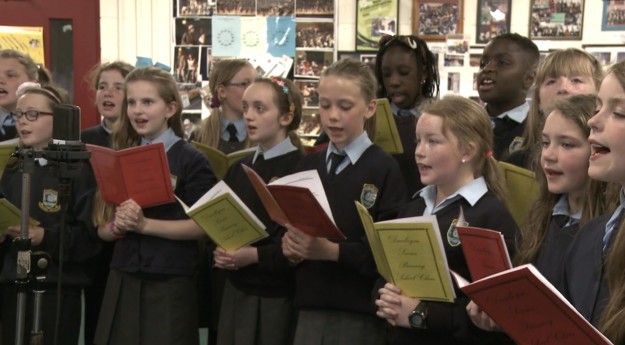 Back in 2012 you were kind enough to feature my little sister Ellen and her friend Carla, who were just starting to compose their own songs and put them on YouTube. These days, the girls are 17 and, along with having their EP ‘Floods’ on iTunes, they have composed the theme song for the ‘It’s your Right’ campaign. This is a campaign celebrating children’s rights and commemorating 10 years of the Office of the Children’s Ombudsman in Ireland. The girls recorded the video in their local school with backing vocals from primary school kids and a teenage string section accompanying them.it’s a really gorgeous song with a beautiful meaning behind it. It would be fantastic to share this video around and raise awareness of children’s rights and how important they are. [A section of a letter from the Office of the Minister for the Environment Phil Hogan to Mick Murphy, a Green Party candidate for Cork South West]

You may recall a post from last  about how Mick Murphy, a Green Party candidate for Cork South West, lodged a complaint with the European Commission about the establishment of Irish Water. It has now been sent to the European Parliament.

Further to this, it’s emerged Mr Murphy has made previous complaints about Irish Water – this time to the Office of the Ombudsman.

On January 31, 2014, Mr Murphy made joint and separate complaints to the Office of the Ombudsman against the Environment Minister Phil Hogan, his department and against Irish Water.

He lodged his complaints under five headings:

1. The transfer of strategic infrastructure that was heavily funded by EU funding to a monopoly in breach of EU funding and competition law directives that prevent such funding being used for the ‘establishment of or support of a monopoly’.

2.  Loss to Mr Murphy under the Sale of Goods and Supply of Services Act.

4.  Loss to Mr Murphy over having to pay a premium for water to pay for the unnecessary/ excess staff that were transferred from local authorities.

5.  Social justice grounds in that there was no provision in the establishment of Irish Water by the Government for the elderly poor who would be unable to pay the water charges.

The Ombudsman wrote to Mr Murphy on February 18 telling him that, before the Office of the Ombudsman could deal with his complaint, it would be necessary for Mr Murphy to first send his complaints to Minister Hogan and Irish Water.

Mr Murphy subsequently made formal complaints to the minister and Irish Water.

Irish Water responded to Mr Murphy on March 14 but Mr Murphy was unhappy with the answers and he complained to the Ombudsman about Irish Water again on March 25.

On March 25, Mr Murphy received a reply from Minister Hogan in relation to his complaint to the Ombudsman.

Mr Murphy says: “In this reply the only issue I raised which was dealt with satisfactorily was the ‘social justice’ issue in that the minister had accepted that: ‘Restriction of supply will only be implemented where all other efforts to secure payment have failed and it is clear that there are no affordability issues’.”

Mr Murphy adds: “Unfortunately this is the only public record of the Minister or his agents conceding such a fact, and public announcements since, and before, this letter seem to revert to the elderly, poor and infirm facing the prospect of a reduction of water pressure that would be barely enough to sustain life.”

Mr Murphy has since asked the Office of the Ombudsman if Minister Hogan sought to block an investigation into his office.

Previously: Once More Unto The Breach Ombudsman and Information Commissioner Emily O’Reilly, pictured launching her 15th annual report today, has suggested  the public is ‘really puzzled’ by the Kieran Boylan case and the subsequent Garda Síochána Ombudsman Commission’s report into allegations of collusion between the drug dealer and the Gardaí.

“Obviously we have to take GSOC seriously. Clearly we also have to take the Gardaí and the Department of Justice seriously as well, but I just feel, as a citizen, that we haven’t got to the nub of it yet. I think a lot of people are really puzzled as to where the truth lies in relation to this, and I think the media has a responsibility, actually, to perhaps dig a little deeper into this for the sake of clarity for the public.” Previously: “Black Ops Being Run Off The Books” Ombudsdudess Emily O’Reilly on freedom of information for all, Nama and Sir Humphrey. On Saturday’s Marian Finucane show on RTE R1.

Finucane: “Are you campaigning to have the FOI, Freedom of Information, returned to where it was, so to speak?”

O’Reilly: “Yes. And I think it will be. Actually it’s very interesting to see what will happen there. There has been a lot of..certainly the Government is moving ahead in the legislation. There’s been a lot of tick-tacking between my office and the relevant department. And now I think what’s happened that is observations on the various changes are going around the various departments. For me, the litmus test will be A) whether the gardai are brought in under FOI. The police have been under FOI in the UK since it came in 2005. The world heavens haven’t fallen. And also whether organisations that are frequently dealt with on your programme – NAMA, NTMA, all the financial institutions – whether they will be brought under FOI. I sense reluctance, not necessarily..well, I don’t know where the reluctance is coming from but I certainly, I certainly sense it. And to my mind NAMA, in particular, holds our livelihoods, a great deal of our livelihoods and our futures in their hands. And I think they should be open to as much scrutiny as possible.

Finucane: “And there is no information whatsoever?”

O’Reilly: “No, there’s no information…I mean, you know they talk about…Actually it was quite funny because Frank Daly, he was being interviewed. I don’t know whether you were interviewing him or Sean O’Rourke, or some programme there recently..And he said, in relation to NAMA…And Frank, I hope I’m quoting you correctly, he said ‘You can have commercial viability or you can have transparency but you can’t have both’…something like that. But it was almost as if he was deliberately parodying Yes, Minister, and particularly the episode called Open Government in which Sir Humphrey says to Prime Minister Hacker, who’s all on for open Government says ‘Prime Minister, you can have openness, you can have Government. But you can’t have both.’ You know? So, commercial sensitivity, of course. But I think we the people deserve to know what this organisation that is dealing with billions is doing.”

Pic Via Office of The Ombudsman