Gardaí have invoked [covid emergency] regulations on 139 occasions, including arrests and cases where personal details have been taken for consultation with the DPP on the decision to issue charges, while pre-existing enforcement powers were also used in relation to 1,172 incidents since April 8.

These include drugs and weapons seizures, drink driving offences and public order incidents.

…From Apr 8 to May 2, there were 52 incidents of spitting and/or coughing against gardaí. Last week, this figure was reported as 31, indicating that another 21 incidents happened over the weekend.

Anti-spit guards, the controversial but legal ‘hoods’ which can be placed over assailants to protect gardaí from being coughed or spat at, have been used 28 times since Apr 8…

Yesterday: Meanwhile, At The Four Courts 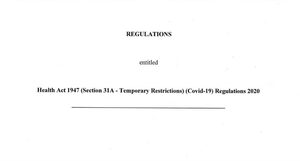 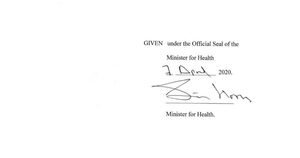 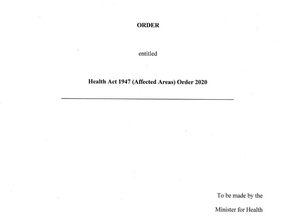 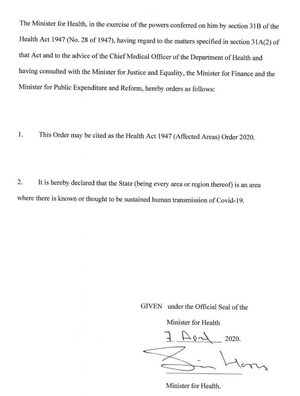 In the last few moments.

The regulations signed by the Minister for Health Simon Harris last night, giving effect to extraordinary Garda powers this weekend, have been posted on the Department of Health’s website.

They can be downloaded here. 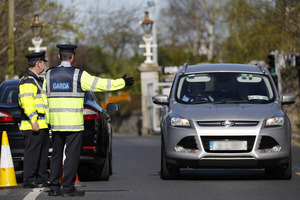 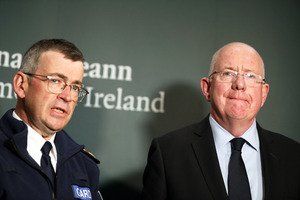 From top: a Garda checkpoint in Phoenix Park this morningGarda Commissioner Drew Harris and Minister for Justice Charlie Flanagan;

The Minister for Justice Charlie Flanagan spoke to RTÉ’s Seán O’Rourke in light of new regulations coming into force at midnight which have enabled gardai to punish people who fail to heed Covid-19 restrictions. The legislation was signed into law two weeks ago.

Breaches of the restrictions could result in fines of up to €2,500 and six months in prison.

It followed the Minister for Health Simon Harris telling RTÉ’s Prime Time last night that, after the current affairs programme, he would sign the regulations to ensure gardai had the powers “in their back pocket” should they be needed.

The regulations have yet to be published.

This morning’s interview by Seán O’Rourke focused on people who may wish to travel to their holiday homes this weekend.

Seán O’Rourke: “First of all, why the delay, why has it taken so long to get these regulations signed? I mean the Commissioner was on I think This Week, 12 days ago or thereabouts, saying they were going to come on very quickly?”

Charlie Flanagan: “These regulations were complex, they had to be very carefully legally drafted and of course people had to be consulted. Can I thank you, Seán, for having me on the show. And can I thank, through you, the people of Ireland, for their compliance and their forbearance. This is the fourth week now of these stringent, emergency measures. We’re not there yet.

O’Rourke: “Yeah. The, just can you clarify. There was mention there by [former Attorney General, former Minister for Justice, former Tánaiste and Senior Counsel] Michael McDowell and indeed I think by [former Garda …] John O’Brien, they’re in existence only until Easter Sunday. That’s a four-day period. Now, OK, they can be re-introduced but why is it such a short span?”

Flanagan: “Well I didn’t listen to all of the texts and calls to your show so far. But it seems to me that the trend is from holiday villages, from scenic areas, from places where tourists frequent and there is a concern therefore, a concern that I share, that compliance may be difficult to sustain now over the coming days with particular reference to the holiday period, the fine weather, the fact that some people maybe coming a little complacent now that we’re into the fourth week.

“So it’s important therefore that the gardai have clarity as to the regulatory arrangements and another reason why Minister Harris signed these regulations into law last night.”

O’Rourke: “Yeah, can I just clarify one thing. A question put forward, and a good one as well, by one our listeners. Can the gardai knock at the doors of holiday homes and send the people there back to their main residences? That’s from Martha in Cork.”

Flanagan: “Yes, my understanding is that regulations can be enforced in terms of movements. And there is quite an array of restrictions on movement that everybody in the country is aware of and that 99.9% of the people of the country have ben fully compliant with. So yes, there’s a restriction on movement, on people who do breach that restriction, can be ordered home and also, of course, the restriction on events in terms of gathering of people in numbers.”

O’Rourke: “So if you’re in a house other than your own, by definition, you have moved there so you can be asked to return to your regular residence. Is that allowed for?”

Flanagan: “Yes, people may well be required to stay at home. They may well be impeded in their travel. You know, the holiday weekend car, with the roof box and the bucket and spades in the back, the gardai will be mounting some checkpoints. I understand the Garda Commissioner will be holding a press briefing later on this morning but he will also be impressing, as I am now, that there is no change in the Garda strategy.

“What the gardai will continue to do is engage and encourage and explain and assist people. But if there are one or two people, or a very small number of people who wish to deliberately flout the regulations and thereby endanger the public health of people, well then the law will be there as a recourse but as a last recourse for the Garda Síochána.”

O’Rourke: “There’s a report today suggesting that one of the reasons it took so long for the regulations to emerge, and also why they are on such a short time-limit, is because some of your colleagues felt that they really were a step too far?”

Flanagan: “Well, they are a last resort. They do comprise restrictions on liberty of a type that we haven’t seen before. But they do amount to a response to the emergency situation that we are now in. As I said to you earlier, Seán, the vast majority of people in the country have absolutely nothing to fear here. The vast majority of people have been most compliant with the advice of Dr Tony Holohan which has been put into legal effect in terms of guidelines and regulations by the Taoiseach and the Minister for Health.

“What we’re saying is that we want this to continue because we want to continue to flatten the curve and save lives. And also ensure, in the meantime, that our health service is in a position to cope.”

O’Rourke: “I suppose, again, people will be wondering, as they inevitably do, you know, how they can work their way around, find a loophole in the regulations and so forth. I mean like how it will work in practice, for instance, if somebody is stopped by a garda and they say ‘guard, look I’m going to the pharmacy for medicine’. You know the guard will presumably have to take them at their word?”

Garda Commissioner Drew Harris said if people have already travelled to holiday homes for the Easter Bank Holiday weekend, they must stay there.

“If you are already in a holiday home then you need to stay there as that is your place of residence.” #Covid19Ireland

Charlie Flanagan says gardaí will be able to knock on the doors of holiday homes and instruct people to go home under the new regs but Drew Harris says if you’ve made it to your holiday home that’s now your place of residence and you should stay there. Already confusing people

This would appear to contradict Simon Harris’s claim yesterday that the Easter Bunny had clearance to deliver eggs this weekend.

Meanwhile, the Irish Council for Civil Liberties has released a statement, calling for the extraordinary police powers not to be used. The statement says:

“Any heavy-handed enforcement of the regulations carries serious dangers for the relationship between Gardaí and the public, especially around asking for documentary proof of employment.

“Criminalising those who do not comply could clog up the criminal justice system at a time when courts are closed but for urgent cases and prisons are trying to achieve physical distancing.”

“The approach of An Garda Síochána up to this point has been based on consent and has been for the most part successful. We urge both Government and Gardaí to continue this approach. The vast majority of people have been observing the advice to stay at home and restrict movements to what is essential for the past two weeks.

“So it is not clear that there is any demonstrated need to move from consent to enforcement and we urge the Garda Commissioner to make it clear that the introduction of these regulations does not lead to any significant change in the operational approach of the Gardaí.”

ICCL: Extraordinary police powers should not be used (ICCL)

Mr Herrick, speaking to Claire Byrne on RTÉ’s News at One, made the following point:

“What we would be saying is that the commissioner now needs to issue operational guidance that we maintain the current practice, that there shouldn’t be a significant departure at this stage and that that policing by consent with the trust and confidence of the people is the most successful way that we can go forward.

“I think, firstly what needs to happen here, of course, is that the regulations need to be published. The public need to see these and the minister obviously made them available to RTÉ last night but the public haven’t seen them yet.

“I think it’s very important that there are safeguards put in place, too. Every single use of these extraordinary powers should be recorded and the Policing Authority should be involved in monitoring their use to make sure that they’re evenly used and also, as the minister and commissioner have said, sparingly as well.”

Earlier, RTÉ’s Crime Correspondent told Ms Byrne that RTÉ had seen the, as yet, unpblished regulations.