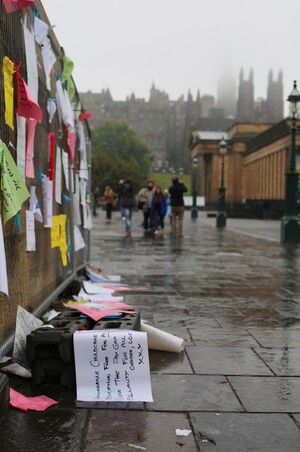 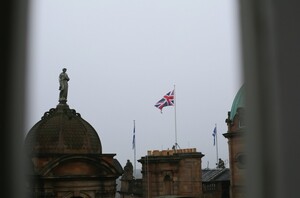 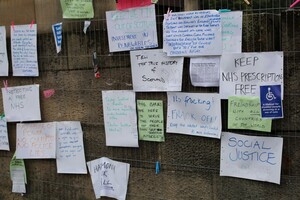 “All is quiet in Edinburgh. Very much back to business. Still wet and misty. The only remnants of yesterday’s referendum seemed to be this soggy wall (above) of hopes and dreams…” 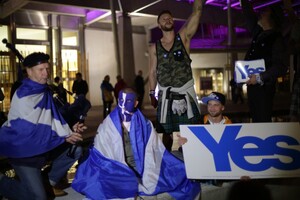 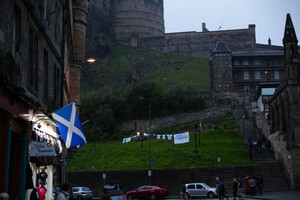 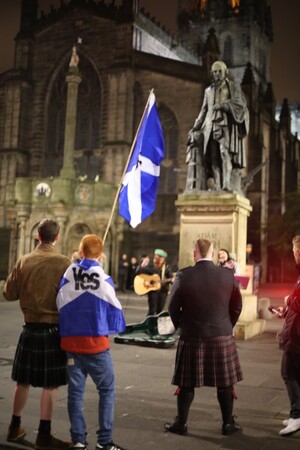 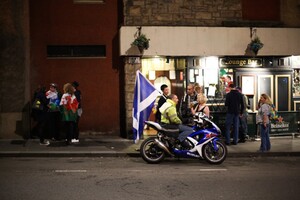 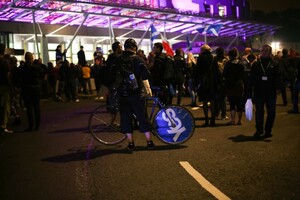 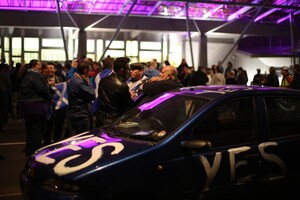 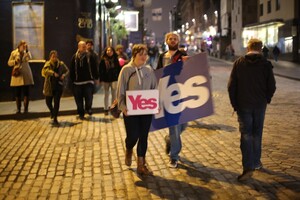 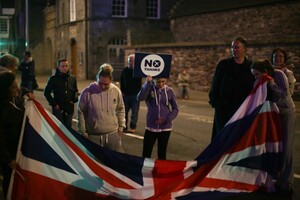 “Just had a [Midnight] stroll down the Royal Mile to Hollyrood. Nice peaceful mood down there, vigil-like….” 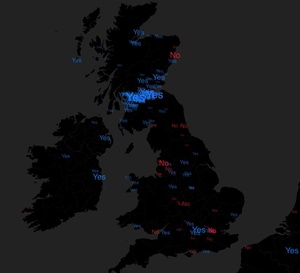 The proudly affirmative Twitter Trend Map for the Scottish Referendum.

If Scotland votes 'NO', perhaps England should then have its own referendum on whether to let them stay in the UK. 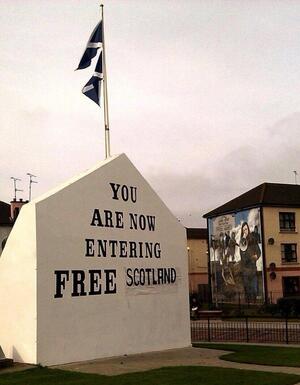 Derry people never being the type to sit on a fence, Free Derry Corner has had a makeover #indyref @bellacaledonia pic.twitter.com/YYExnNk6JR

Meanwhile, outside a polling station in Scotland.. 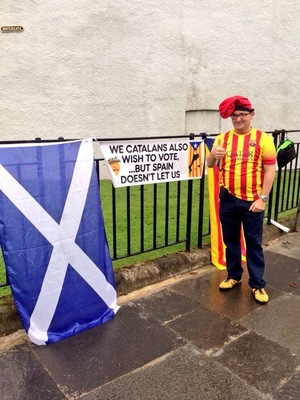 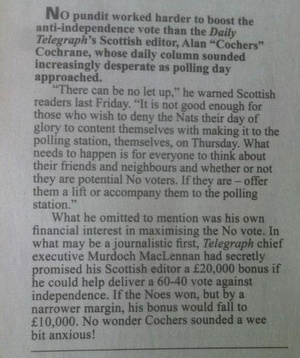 From this week’s Private Eye. 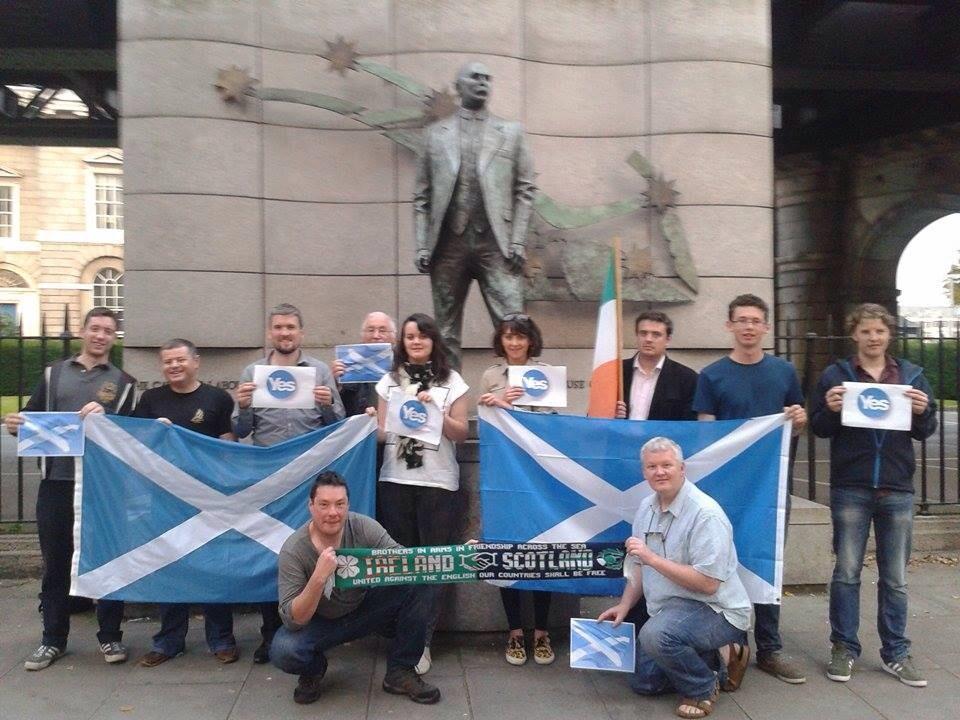 Irish supporters of a yes vote for an independent Scotland in tomorrow’s referendum at the statue of Edinburgh-born James Connolly outside Liberty Hall, Dublin. 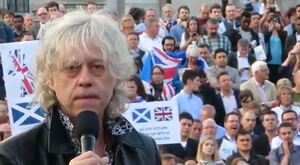 An Irishman who, as a registered ‘non dom’, uses a tax loophole to avoid paying tax in Britain gushes about the greatness of Britain.

“Glasgow was one of the first places where we could get a gig when people in London wouldn’t look at us.”

“It was the people of Scotland who bought our records, which got us up the charts.”

“You two guys (England and Scotland) invented the modern world. Why go back from that?” Geldof said.

“Remember I’m Irish but it was the UK which gave me my life. The people inside this political nation are truly extraordinary.

“The English are an amazing people. Their history is just f**ing amazing.

“But it took the Scottish nation’s genius – and literally that is the word – to invent the modern world. That’s the truth of it.”

“The logic of the 21st century and immediate future is towards co-operation, consensus and compromise, as opposed to the past and the murderous 20th century which was defined by competition. Why retreat into the past? Why regress to an imagined national idyll? It won’t happen.

“What interest does the world have in Scotland or England unilaterally? The nation state is dead. The 21st century is about interdependence.”

“It’s a very healthy sense to understand who you are as a people and your place in this world. That’s a normal human instinct. We have a word for it – it’s called patriotism. But when it’s manipulated into the base metal of politics, which is nationalism – when political people on both sides of the argument do that – you have to be very wary. You really must think through these things.

“Nationalism is a very dangerous political animal. I know this – I’m Irish. It’s a cheap political trick which twists the understanding of who we are.

“I completely understand the emotional impulse towards independence. But always consider independence in inverted commas because what the f*** does it mean?

“We are entirely dependent on one another. None of us, in our private lives or our political constructs, are ever independent.

“We are all sovereign unto ourselves but we’re dependent on one another.”

“Actually co-operating with each other – that excites me. That interests me more than the f***ing bagpipe playing. That sort of stuff drives me nuts in Ireland as well.”

“We were never allowed to industrialise. You guys had the very opposite. You guys chose – very Scottish, very practical – you saw the way to utilise your genius was by joining up, together. F*** me did you do it – and ran the f***ing show and still do.

“Look what you did. The NHS – Beveridge’s dad was Scottish. Blair and Brown brought in the minimum wage. The actual benefits of this country are actually only derived by cooperation together.”

“There’s going to be an independent Scotland and a united Ireland and it will all be great? What will be great about it? Please explain that to me. Do you have any less pride in being Scottish or Irish than you will have next week? Seriously? It’s the manipulation of that pride and spurious arguments like that which drives me nuts.”

Bob was asked about his tax affairs by The Times’ Lucy Bannerman at the World Economic Forum in Addis Ababa in 2012:

So how much is he worth? “I’m not telling you. But I am rich, let’s be clear.”
Can he understand why some might get annoyed when rich rock stars campaign about poverty?
He explodes with rage. “I pay all my taxes. My time? Is that not a tax? I employ 500 people [through his production companies]. I have created business for the UK government. I have given my ideas. I have given half my life to this. How dare you lecture me about morals?”

The problem with God is He thinks He’s Bob Geldof (James Delingpole, Telegraph May 2012) 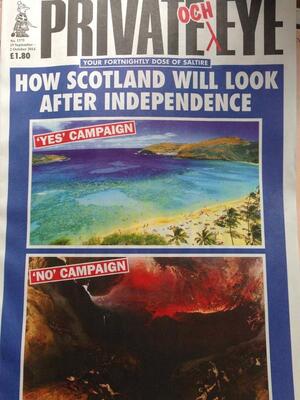 Everything you read is true. 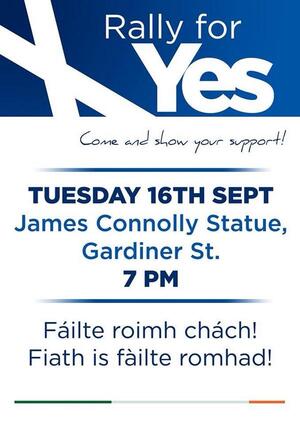 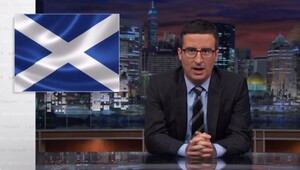