Philomena Lynott, mother of the late Phil Lynott, with Balla Bán Art Gallery owner, Frank O’Dea next to Phil’s statue outside Bruxelle’s on Harry Street, Dublin 2 and a portrait of Phil dressed as Charlie Chaplin

On Sunday there will be a Guinness World Record attempt to have the largest gathering of people dressed as Charlie Chaplin.

Also on Sunday, A Birthday Party For Phil will take place at the Bloody Stream Pub in Howth,  Co Dublin from 3pm.

Or the result of a Cillian Murphy/James Nesbitt telepod splicing accident? 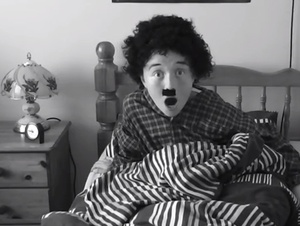 I’m just after completing my leaving certificate examinations here in Ireland, and I have just directed my first low budget short film.

It’s a comical tribute to Charlie Chaplin with an unusual horror plot line that shows a younger version of him, experiencing some very abnormal circumstances with a lot of laughs. Beginning with an early morning rising, we follow Charlie through out the day, as his mental health is
put into question by what appears to be a ‘stuffed toy’ uprising.

I would really appreciate a reply, with any constructive criticism so that I can improve upon my techniques and further my skills.