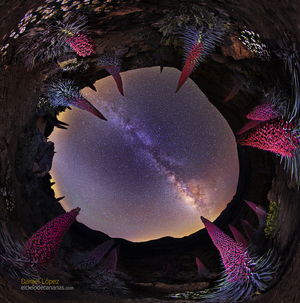 Alien flora? Well that depends on where you’re from. To wit:

Found on the Canary Island of Tenerife in the Teide National Park, red tajinastes are flowering plants that grow to a height of up to 3 metres. Among the rocks of the volcanic terrain, tajinastes bloom in spring and early summer and then die after a week or so as their seeds mature. A species known as Echium wildpretii, the terrestrial life forms were individually lit by flashlight during the wide-angle exposures.