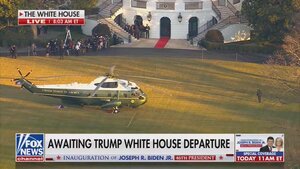 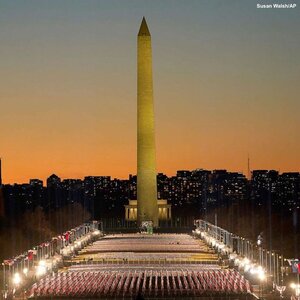 The sun rises over the National Mall, where a “Field of Flags” represents Americans who cannot attend the inauguration amid rona fears.

On RTE’s Radio One.

Various shows looked at the fall-out of Taoiseach Leo Varadkar’s comments in Washington yesterday when he claimed he made a call to Clare County Council when he was Minister for Tourism in 2014.

Readers will recall Mr Varadkar said he made the call after he got a phone call from Donald Trump, who was then a businessman, about a proposed wind farm which was to be built close to Mr Trump’s Doonbeg golf resort, subject to planning permission.

The wind farm subsequently didn’t get planning permission. [The decision was appealed to An Bord Pleanala but the board upheld the decision to refuse permission].

Readers will recall, Mr Varadkar specifically said of the permission not being granted:

“The president has very kindly given me credit for that, although I do think it would probably have been refused anyway. I’m very happy to take credit for it…”

Clare County Council last night said it had no record of any contact from Mr Varadkar.

“The latest on it is that it was in fact the Taoiseach’s office that made an inquiry about the status of the planning application.

“They say nothing more than that and a record probably wouldn’t be kept in that instance .

“And it’s being compared by Leo Varadkar’s side to a politician making a call about the status of a medical card and saying it’s nothing at all along the lines of any judicial matter so therefore, on that grounds, they say, it’s acceptable, but there’s no doubt, it is controversial and many in Leinster House believe it highly unusual given the nature of what was being proposed on the planning application and the big purchase at Doonbeg at the time.”

Dr Jennings specifically asked Senator Conway if Mr Varadkar rang the council – as Mr Varadkar himself said – or not.

“My understanding is that he didn’t ring the council. I’ve been speaking to council officials. None of them can recall receiving a phone call from Leo Varadkar.

“I have been talking to people in Leo Varadkar’s office who were working with Leo Varadkar at the time he was minister for transport and tourism and they’re absolutely clear that Leo Varadkar did not make a call – that, basically, somebody in his office made an inquiry in terms of the status update.

“Sometimes we will just check, we can do it online or we can make a phonecall to see what’s the story with this file, you know when is a decision due, and so forth.

Further to Morning Ireland, on Today with Sean O’Rourke, which was presented by Damian O’Reilly…

“It was a humorous side remark and I accept that’s what it was and it’s something that he spoke about on other occasions. The key point is that at the core of this is that he got a call from Donald Trump, he wasn’t president. Leo wasn’t Taoiseach at the time, he was Minister for Tourism and Sport.

“And indeed, people in public life receive calls all the time from business people, all the time from the public about this and the other and on planning issues, we’re often invited to meetings arguing people for something or against something and as Mr Howlin said there, I mean, Regina Doherty is strongly opposed a planning application for a wind farm in her own constituency, so there’s nothing new…

“[Leo] made a query, through his office, as to what was the status of the application and that’s what he did.”

“…there was no law broken, it wasn’t interference…”

“The office inquired about the planning permission, they didn’t make representation and that’s the democratic process…”

“But the other point is he did it openly, there’s nothing hidden about this, he spoke about it two years ago [in Time magazine], he joked about it in public, what’s the big deal here?“

“All the papers covering the trip to Washington by the Taoiseach. And, you know, part of me thinks, oh, he’s telling his story about Doonbeg and I presume he thought, it’s a gas story and it’s a bit of an old, a bit of fun, and you’re in Washington.

“But, you know what, when you’re Taoiseach and you’re in Washington, you have to remember that you might aswell be on the main street in Killarney or wherever you want to be in Clare because it’s just, you kind of think when you go out there, you think the rules are a bit different but they’re not.

“And sure enough, we’re not talking about trade and immigrants in as much a way as you can hear on Morning Ireland there, the interest of the trip has really been slanted towards what he said about Doonbeg and the wind farm and you heard [Fianna Fail TD] Timmy Dooley, a local interest, talking about that.

“I’d say that they’re probably…a bit of a face palm, ‘oh, if only, maybe, you just didn’t need to tell that story and maybe if you hadn’t and everything else’, but…anyway…that’s what he did and that’s what they’re doing.”

“The headline in The [Irish] Times is: ‘Trump open to deal on undocumented’, but actually it’s the story that seems to be getting the most traction is the on the side which is ‘Varadkar criticised over Doonbeg’.

“Bit of a pity really because those trips are really meant to be fun, good news trips and you come back armed with loads of stories about investment and everything…“

Listen back to Tubridy here

Listen back to Today with Sean O’Rourke here 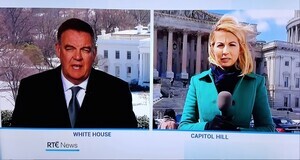 Bryan Dobson talking to Caitríona Perry down the road in Washington DC. What’s wrong with a face to face chat? Nearly as bad as a live link up between two reporters at Leinster House and Government Buildings around the corner! Rant over. 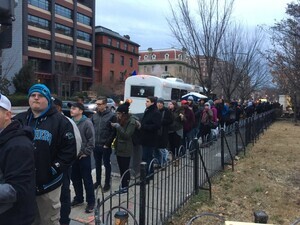 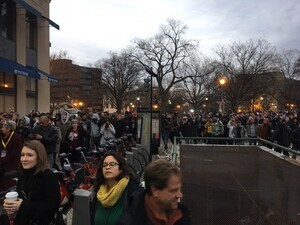 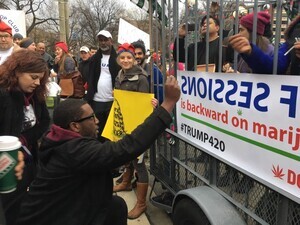 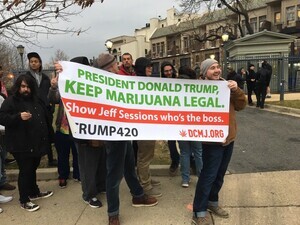 Not a joke: There is a stream of people coming to get free marijuana in Dupont. Organizers guess ~8,000 free joints... The pot is being given away from a jail cell. Advocates say it makes a point about need for legalisation… “I know no other inauguration where I got free weed,” says person standing in line for a free joint in Dupont. 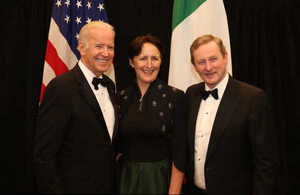 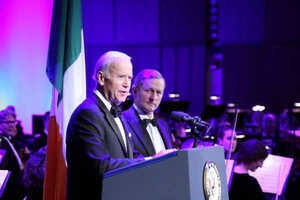 From top: Taoiseach Enda Kenny with US Vice President Joe Biden and actress Fiona Shaw and at the Kennedy Centre for the ‘Ireland 100’.

The sense of event was heightened by the presence of Vice President Biden and the taoiseach of Ireland, Enda Kenny, which meant the accompanying presence of airport-style security gates that kept the glittering audience waiting in line for minutes after the scheduled 8 o’clock start. We all wish that our government leaders would come to more arts events, but when they do it is certainly a hassle for everybody.

Fiona Shaw, the actress, was a buoyant master of ceremonies who was as natural and unaffected as it may be possible to be in an evening skirt, trying to keep a touch of class in this high-end variety show and then marshaling her own talents for a recitation of Yeats’s famous “Easter, 1916” (“A terrible beauty is born”) that was unquestionably the artistic highlight of the evening…. 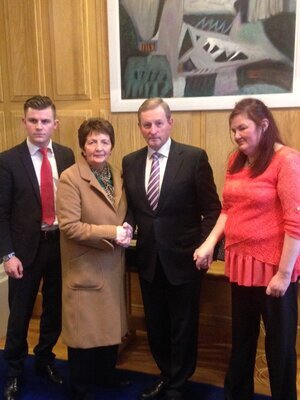 Mary Boyle’s twin sister Ann Doherty is travelling to Washington this morning for a series of meetings with Irish-American politicians, lobby groups and organisations – to speak about the 1977 disappearance of Mary in Ballyshannon, Co. Donegal.

During the visit, Ms Doherty is expected to call for the resignation of Justice Minister Frances Fitzgerald and Garda Commissioner Nóirín O’Sullivan.

Journalist Gemma O’Doherty, who will travel with Ms Doherty, writes:

The visit is the latest step in Ann Doherty’s battle for justice for her six-year-old sister, which has taken her to the parliaments of Stormont, Brussels and Westminster.

Ms Doherty will inform members of the United States Congress that Mary’s killer is being shielded by An Garda Siochana and that a politicians interfered in the investigation shortly after the murder, ordering that certain people were not to be considered suspects.

During their visit to Washington, they will visit Capitol Hill to meet US congressman Brendan Boyle whose father comes from Donegal, former Congressman and lawyer Bruce Morrison, best known for his work on the Irish peace process and immigration reform, and other members of the House of Representatives.

They will brief the Centre for Missing and Exploited Children and the Ireland Fund about the case, as well as a number of organisations lobbying on justice issues.

‘The key purpose of this trip is to open Irish-America’s eyes and the US authorities to the wide scale corruption in the Irish police and the criminal justice system,’ said Ann Doherty.

‘There are many horrific cases of cover-up by the gardaí in the Republic that Irish-Americans and anyone who cares about Ireland need to know about. The police have protected my sister’s killer for almost 40 years.

‘For most of my adult life, I have known who murdered Mary. He is walking around Donegal today, immune from prosecution. Instead of arresting him, the gardai have targeted me, and others who have stood up for Mary’s right to justice, in what can only be called an insidious campaign of intimidation.’

Ann Doherty met Enda Kenny in November 2015 but says the situation has deteriorated further since their meeting and she feels let down by him.

Mr Kenny was given information about the murder in 2011, which he admitted recently in Dail Eireann that he passed to the gardai but failed to follow up.

In December, Ann asked An Garda Siochana for a search of a location in Donegal where she believes Mary’s remains may be.Her request has been ignored. She has also been denied the right to an inquest into her late sister’s death.

‘The gardaí have sufficient evidence to bring her killer to justice, but to do so will reveal a sordid cover-up by police and politicians,’ said Ann.

‘No country can call itself a democracy when its police force perpetuates the cover-up of a child’s rape and murder. That is why the rest of the world must know about Ireland’s record when it comes to policing, justice and protecting its children.’ 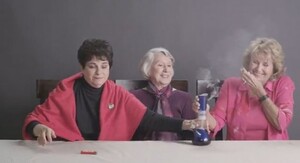 Three grandmothers in the state of Washington where recreational use of marijuana is legal, try it for the first time. 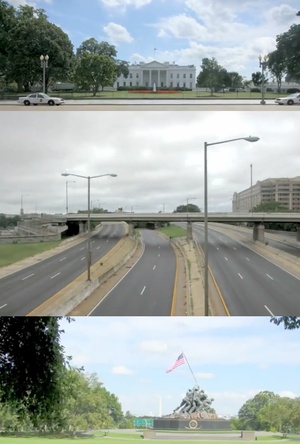