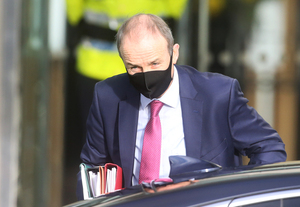 To say that was not a good week for North/South relations is to understate how utterly damaging and chaotic the past seven days have been.

They started with the Taoiseach’s inopportune comments on Brendan O’Connor’s radio show (I dealt with these last week) and finished with the astonishing suggestion from Brussels that it could invoke Article 16 of the Northern Ireland Protocol .

While the week may have finished yesterday, the Article 16 debacle has not. It is far from over. Though the Taoiseach and Minister for Foreign Affairs worked hard over the weekend to limit the damage, be in no doubt damage has been done to relations on this island. A price will be paid here and a big price must also be paid in Brussels.

Dublin must insist that those responsible for this mess are held accountable. Hailing the Commission decision not to do the wrong thing as a “positive”, may be very diplomatic, but it is neither sufficient nor proportionate.

Returning to my observations last week on the Shared Island Unit, I do not flatter myself to imagine the political crew currently occupying government buildings read any of my scribblings. I mean, why would they read them now when they paid scant attention to what I said on the odd occasion I was ever asked for my thoughts. Nonetheless, I was genuinely gratified yesterday to hear some tiny incremental movement from the Taoiseach along the lines I suggested last week.

Speaking about the Shared Island Unit on RTÉ radio’s This Week yesterday, the Taoiseach started out by doing what he usually does,  discouraging, stifling, and dampening down any notion of preparing for a referendum, but then he slightly changed tack, albeit in response to a question,  perhaps presaging a small change in his position.

Asked to respond to comments made by former Taoiseach, Bertie Ahern’s during a Fianna Fáil grassroots Zoom call last week to the effect that work needs to be done now with a view to holding a unity poll at the end of the decade, the Taoiseach Martin avoided contradicting his predecessor and opted instead to observe that he personally didn’t foresee a border poll in the next five years.

This may not seem like much of a move or a concession. It may just have been the Taoiseach thinking on the hoof, as he is sadly wont to do in such interviews… but even so, on this occasion it is welcome. It may not be much of a shift, but as they say in Cork, a shift is still a shift.

The Taoiseach may be ready to move from avoiding all discussion on preparations for a referendum on unity to saying, well the referendum itself shouldn’t take place within the next five years, but that does not stop the work from starting.

The next step is to acknowledge that some planning and preparatory work should commence.  When I say planning and preparation for a referendum, I don’t mean designing the posters, coming up with slogans or working out where the ballot boxes will be placed, but rather starting the seriously heavy work of examining what a united Ireland might look like.

We should start preparing in the same way as the Scottish Government prepared for its independence referendum. With a detailed and well researched white paper that set out and analysed all the possibilities, positive and negative, of Scottish independence.

We should start preparing now so we give ourselves plenty of time to engage with as many people as possible across all communities, particularly those in unionism.

Though it may often suit some on the unity side to portray all of unionism as recalcitrant, there has long been a positive and progressive streak in unionism. Think back to the appearances of people like Roy Garland, Norman Porter (author of the excellent Rethinking Unionism), Trevor Ringland and many others at the original Forum for Peace and Reconciliation or the 2002/03 reconvened one.

I have repeatedly stated here that I believe a unity referendum is inevitable, but that arguing over the date was both impractical and politically imprudent.

Those who advocate setting a date for a referendum now, say it is the only way to ensure that the detailed and complex preparations also start now. I understand their rationale and acknowledge their concerns. I can see why they’d worry that an Irish government, especially this government or its predecessor, would try to obfuscate and prevaricate unless you set the process irrevocably in motion by setting a date.

But doesn’t the logic of their position mean that the emphasis should be on starting the process? To focus on the date is surely just putting the means ahead of the ends?

Any date set now would be arbitrary, based on someone’s best guess as to when we will be ready. Besides, it is not Dublin’s call. Dublin has a definite interest, but not the final say. That rests with the Northern Ireland Secretary of State, under the Good Friday agreement and Schedule 1 of the 1998 Northern Ireland Act

Note the threshold for holding a vote is when, in the opinion of the NI Secretary of State, a majority would likely vote to leave the UK.

Dublin should have a view on when a referendum should be held, as it well positioned to assist a NI secretary of State to come to the opinion that such a majority is possible, but that view should be informed by the progress of preparations and engagement, not just by what we feel in our waters right now.

The collective priority should focus on that which is in Dublin’s control and that is when and how we start to plan and prepare for an eventual referendum and the Irish government’s central role in advocating for unity.

That formal work should already be under way via the Shared Island Unit. A great deal of serious work has already been commenced with academics, institutions and civic society groups producing serious pieces of work, including the Nov 2020 interim report of the Working Group on Unification Referendums on the Island of Ireland. The Shared Island Unit should build and expand on that work. It should be open to all ideas and inputs from across all communities.

Hopefully Micheál Martin’s small move yesterday indicates an incremental shift in his thinking to appreciate that the Shared Island Unit can have a vital role in examining how a united Ireland could work.

It has been strange sensation over the past few months to listen to the Taoiseach, the leader of constitutional republicanism on this island, dispelling any notion of preparing for a referendum just as many in Unionism, including the former leader of the DUP and NI First Minister, Peter Robinson, and the person some believe may be the next DUP leader, Gavin Robinson MP, are urging their supporters to start preparing for it.

Both Robinsons (unrelated) see the challenge ahead and recognise that recent political changes, from Brexit to Scottish independence, mean that they can no longer just depend on flag waving and sloganizing to get their folks out to the polls. They see that they must not only solidify and hone their arguments for maintaining the union, but they must also tailor them to address concerns of moderate nationalists and unionists alike.

Let us be clear, there are arguments for Northern Ireland remaining in the Union. And while the referendum, when it comes, will be as much about emotional appeal as it will be about logic and individual self-interest, some of us who advocate for a United Ireland, whatever form that may take, need to grasp and that tricolour waving and balladeering alone not only won’t work, but could be counterproductive.

Asking people to fundamentally change their status quo is a big task. We need to have the answers to a great deal of questions and many of those answers may not suit us. But – doesn’t starting the second century of Irish independence with the challenge of building a new and better Ireland sound exciting? Why would any Taoiseach delay the start of that process for even one day?

18 thoughts on “Derek Mooney: Martin May Be Learning Lessons Of Last Week’s Mistakes”