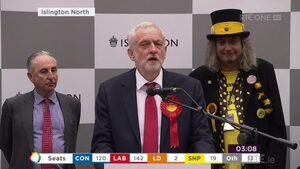 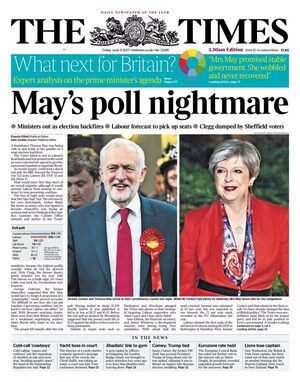 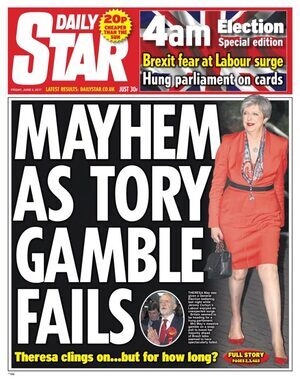 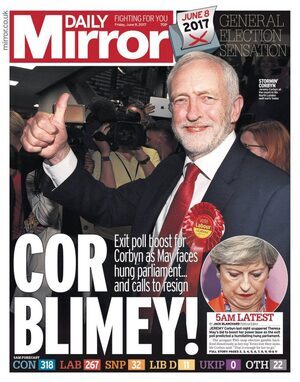 Ahead of Thursday’s British general Election… 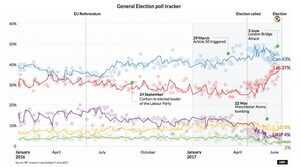 The lines track the weighted average of recent UK national polls.The points represent the vote intention percentages given by each pollster to each political party, representing in this way a variable showing the margin of error.

IBTimes UK has calculated a weighted average from the eight biggest UK pollsters, showing the Conservatives leading by 6 percentage points over Labour.

Corbyn or May?
Read this.
Thanks.https://t.co/aHTvSo55p0

Compared to the buffet of neo-liberal homogeneity that we chewed through in 2015, the possibility of voting for a politician that offers change seems oddly exotic.

Jeremy Corbyn has somehow been in politics for decades with his integrity perfectly preserved, like his much derided beard has functioned as hairy formaldehyde for his principles.

Theresa May has chosen to make this election about ‘personality’ rather than principles, which seems increasingly unwise.

The delirious sycophant that had her ear when they were plotting this smash ‘n’ grab clearly saw Theresa as some kind of female Freddie Mercury set to dazzle voters from the podium rather than a vindictive librarian drawn by Quentin Blake.

Jeremy Corbyn Won’t Be Perfect, But He Has The Qualities I Want In A Strong And Stable Leader (Russell Brand, Huffington Post)

@Emmabarnett @jeremycorbyn @BBCWomansHour You repeatedly editorialised in a way no trained BBC journalist would, dropping in your own views / unsubstantiated claims

“…I would like to take a moment to speak to our soldiers on the streets of Britain. You are doing your duty as you have done so many times before.

I want to assure you that, under my leadership, you will only be deployed abroad when there is a clear need and only when there is a plan and you have the resources to do your job to secure an outcome that delivers lasting peace.

That is my commitment to our armed services.

This is my commitment to our country. I want the solidarity, humanity and compassion that we have seen on the streets of Manchester this week to be the values that guide our government. There can be no love of country if there is neglect or disregard for its people.

No government can prevent every terrorist attack. If an individual is determined enough and callous enough, sometimes they will get through.

But the responsibility of government is to minimise that chance, to ensure the police have the resources they need, that our foreign policy reduces rather than increases the threat to this country, and that at home we never surrender the freedoms we have won, and that terrorists are so determined to take away.

Too often government has got it wrong on all three counts and insecurity is growing as a result. Whoever you decide should lead the next government must do better.” “You loved me as a loser, but now you’re worried that I just might win” – Leonard Cohen

On Your Unsuitability for High Office

The minute they realise
you might succeed in changing
more than the occasional
light bulb in the new
old community centre,
where the anti-apartheid
meetings used to happen;

the late Lord Lambton
climbs out from between
two prostitutes and into
the next available issue
of the Daily Express
to urge votes for anyone
but you; Earl Haig

gets up from his grave
to bang the table and tell us
you’ve not successfully
organised enough death
to properly understand
Britain’s defence needs
in the twenty first century.

The Telegraph mutters
into its whiskers about your lack
of experience – how you never once
so much as successfully destroyed a bank;
as former comedians gather
in darkest Norwich and Lincolnshire
to speak of your beige zip-up jackets.

LBC Radio exclusively reveals your plan
to give each failed asylum seeker,
and anyone who’s ever
taken an axe to a child,
their own seat in
the House of Lords;

While on Radio Four’s Women’s Hour
the former editor of the News of The World
and Dame Myra Hindley agree:
the last thing this country needs
right now is you. Did you see our new TV broadcast from Ken Loach tonight? Watch it again now & share @jeremycorbyn’s vision of our country #ForTheMany ↓ pic.twitter.com/mGuPiXXWtc

“We must stand up for our country’s values” pic.twitter.com/PpTFpX2QYP Jeremy Corbyn’s refusal to be part of the liberal media game, on their terms, may in fact be the wisest strategy of all.

Media watchers looking at events across the water won’t be surprised to hear that the first academic investigations into the coverage of Jeremy Corbyn have found that the media have been less than objective.

One study undertaken by the London School of Economics found that 57% of articles (in eight national newspapers) treated Corbyn in a critical or antagonist manner and a total of 67% of all opinion pieces did so.

Corbyn himself is not sourced in 50% of articles, and in one fifth of articles where he is given voice he is taken out of context or distorted.

Anti-Corbyn Labour parliamentary party sources also outweigh pro-Corbryn party sources. Moreover according to the study no less than 30% of articles ridicule Corbyn and 13% included personalised attacks on Corbyn himself.

Research from the UK based Media Reform Coalition found similar results when looking at the coverage of Corbyn’s first week as leader. The study found that 60% of articles were negative and concluded that:

‘…large sections of the press appeared to set out systematically to undermine Jeremy Corbyn in his first week as Labour Leader with a barrage of overwhelmingly negative coverage’.

Meanwhile, a study from Birbeck University working with the Media Reform Coalition looked at no less than 465 online news items from 8 providers, and 40 prime time television news bulletins on BBC One and ITV.

This research found that ‘twice as much airtime had been given to critical, rather than supportive voices in relation to Jeremy Corbyn on the main BBC bulletins.’

They also reported a strong tendency to use pejorative terms such as ‘hostile’ and ‘hard-core’ when describing Corbyn and his supporters.

Media watchers on this side of the Irish Sea will find it all too familiar following coverage here of the water charges movement, not to mention one of the most overtly biased elections in many years.

So what is it about the media and such movements?

Why is it that the liberal news values of objectivity, impartiality and fact-checking seem to go out the window whenever something even slightly left-field comes along?

Ralph Miliband wrote about this tendency decades ago describing how the western media would follow general rules of impartiality and objectivity once the subjects of the stories remained within certain clearly defined parameters, but those rules will be quickly jettisoned for issues or political subjects outside the boundaries.

Let’s say in Ireland’s case the press will be pretty impartial between Fine Gael and Fianna Fáil or even Labour if discussing how to improve conditions for private interests to invest in the housing market.

The parameters are the assumption that only private interests (i.e. developers) can build houses, and they must be ‘incentivised’ to do so. The only argument is on the method of incentivisation; whether by deregulation, subsidisation or tax relief and so on.

However, throw in a policy that is outside the broad consensus, and a political source outside the realm of political correspondents and PR nexus – let’s say how to remove private interests from housing – with a proposal from a left-wing representative, then that impartiality goes out the window.

The ink was barely dry from a motion passed by Dublin City Council that had been proposed by the Workers’ Party Cllr Eilis Ryan on the redevelopment of O’Devaney Gardens when the Irish Times alongside the council bureaucracy started spinning against it.

The successful motion is for a fully publicly-funded housing scheme, with the innovation of opening it up to people from various socio-economic groups on a rental basis.

The Irish Times, rather than discuss the merits of the proposal, spun that it would simply delay the supply of housing, underlying the relationship that exists between the property industry, the state and the media.

Likewise we are constantly informed rent control is ‘impossible’, (apart of course for Germans, Austrians the half of continental Europe) and that Governments ‘can’t create jobs’, even though some of Ireland’s most successful companies have been public enterprises or have been heavily subsidised by the state.

So what are the parameters involved? In short they are parameters within the deeply embedded ideology of liberalism.

Liberalism has many expressions from the more reactionary neo-liberal variety – what economist Paul Krugman dubs ‘market fundamentalism’ – to the more touchy-feely Irish Times type, that will sometimes challenge conservatives on social issues, or on elements of generally superficial reform.

However, both camps have deep ideological assumptions around the liberal market economy and will defend it from all perceived threats.

The Irish media’s social liberalism is perfectly in tandem with liberal capitalism.

Here women, people of colour and differing genders, while acting as individual economic units, are to be welcomed as equal. Just don’t mention structural issues such as the lack or childcare facilities (beyond its potential as an investment opportunity) or meaningful paternity leave.

We are happy to have equality in marriage, but don’t mention rent control.

Racism will be denounced from the highest moral ground while military planes are quietly refueled in Shannon and refugees (the ones who make it here) are quietly warehoused for decades.

We can celebrate intersectional bombs with the election of Hillary Clinton while appropriating radical feminism to attack figures such as Corbyn or Bernie Sanders, and demonise working-class communities like Jobstown.

The reasons for the embedding of liberal ideology in the media sphere are myriad; not least journalistic practice and the role of so-called ‘official sources’ alongside an ever growing public relations industry (it’s no accident that both David Cameron and Labour leadership candidate Owen Smith came from careers in PR).

The class nature of journalists – with the cost of education constantly increasing alongside the necessity of ‘interning’ (i.e. working for free) in the creative industries means that only those from higher socio-economic backgrounds can aspire to be a journalist.

And of course not forgetting the issue of media ownership and an industry dependent on advertising from the very economic system that it reports on: Overall, the press rests on ideological beliefs that run through every aspect of society.

So what is to be done?

It is easy to call for alternative media, but it will always be difficult to sustain these without the kind of funding available to groups like Independent News and Media, not least to provide a living for professional journalists.

Citizen journalism while hugely refreshing cannot replace the experience of daily beat journalism and social media for all its advantage is still dominated by the mainstream media organisations.

Others like Owen Jones, have called for a better media strategy, however there is an element of ‘snakeoil’ about this, as media strategy really means changing policy to fit into those narrow parameters, again; and then one could ask what is the point?

As pointed out by Des Freedman of Goldsmith’s University, civil rights and labour movements such as the suffragettes and the trade unions have always faced a hostile media. And have been able to overcome it in the past using a mixture of strategies and as we saw with the water charges movement, the media is not always as influential as we may think

So while the press vilifies Corbyn, as much for his so called inability to ‘do’ media, the fact is that Corbyn’s refusal to be part of the liberal media game, on their terms, may in fact be the wisest strategy of all.

Dr Henry Silke is a Journalism lecturer at University of Limerick and writes for Critical Media Review.