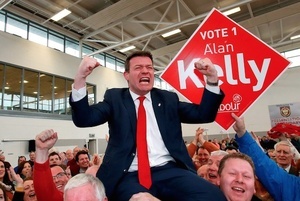 Alan Kelly during the General Election 2016 count in Thurles, Tipperary

Would somebody please give him some power, for pity’s sake.

Seven councillors have now called on leader Brendan Howlin to resign and make way for another leader.

Speaking to the Irish Examiner, a number of councillors have said Mr Kelly is what the party needs and restated the calls for Mr Howlin to make way…. 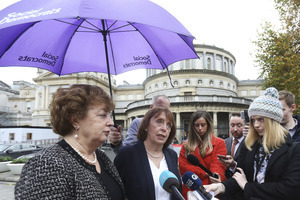 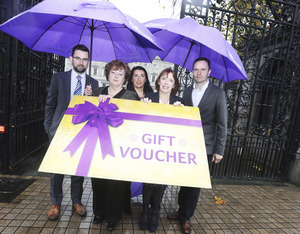 The Social Democrats launch a new Bill – the Consumer Rights (Gift Vouchers) Bill, 2017 – to end the rip-off associated with gift vouchers and cards.

The bill would stop retailers “imposing expiration limits of less than five years on vouchers while prohibiting a range of charges connected to their use”. 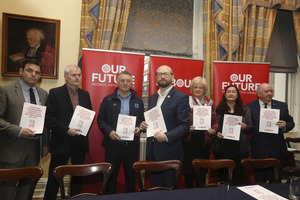 Labour Employment spokesperson, Senator Ged Nash (Glasses) with the General Secretary of the Irish Congress of Trade Unions (ICTU) Patricia King (third right) at the launch of a bill to tackle bogus self-employment contracts that deny workers the same protection and entitlements as their employed colleagues.

The Protection of Employment (Measures to Counter False Self Employment) Bill 2017 would put all workers on an equal footing in situations where they are carrying out the same duties, but are not legally designated as ‘employees. 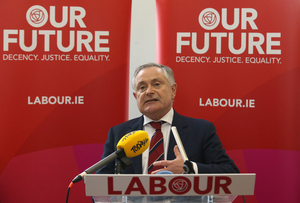 “The future facing our country today is very different than it was five years ago. Our economy has recovered, strong growth continues and unemployment is falling.

But there are also many people around the country who are still hurting, and struggling to put food on the table for their families.

With our country now at a crossroads, Labour’s Alternative Budget seeks to cut poverty, not taxes.

We want to improve public services, build homes and hospitals, employ teachers and healthcare workers, and reduce the cost of living for our future Ireland.

One of the most pressing issues facing us as a nation is the housing and homelessness crisis, and Labour’s Budget includes a fully costed plan to invest nearly one billion euro into building an extra five thousand public houses in 2018.

In the key area of health, we are also committing to funding Sláintecare [a 10 year plan to revolutionise the health service  with cross-party political support]. – a plan that must be delivered upon by Government.

“This document [at link below] presents a vision for our future and shows that Budgets can be drawn up in a way that will promote decency, justice and equality in our society.” 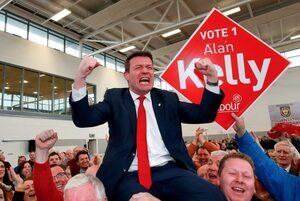 Alan Kelly at the last General Election in 2016

And really for the future of social democrats — which we all are — and the future of democratic socialists, really, there needs to be that coming together to forge a block not just in Leinster House but across the country.”

“I don’t tolerate the two phrases: pro-choice or the other extreme of pro-life. I’m in favour of getting rid of the Eighth Amendment and I’m in favour of legislating for the rights of women. A lot of these choices should be based on the relationship between a woman and her doctor, in consultation with her family.”

“Yeah, I think that’s something we could look at. But under certain conditions: because if you legalise it for medicinal purposes you’re opening a can of worms anyway. So, you might as well look at it in a broader sense. You’d have to look at volumes: what would be allowable and all that.”

“I’d love to be Taoiseach. If you’re going to answer that question: you should also put down what I really mean is that I’d love to maximise where the Labour Party gets to. That’s more important to me. I don’t want another headline: ‘Power is a Drug… It’s Suits Me!’ ‘Alan Kelly Wants To Be Taoiseach!’ For God’s sake!”

“This country is going to suffer as a result of the populist stance of people when it comes to water. Three quarters of people in Ireland were paying for water. And for one spin on the merry-go-round, Fine Gael abandoned all principle and got into bed with the most irresponsible politician in Ireland in Barry Cowen.” 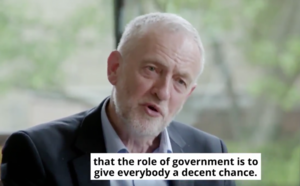 Did you see our new TV broadcast from Ken Loach tonight? Watch it again now & share @jeremycorbyn’s vision of our country #ForTheMany ↓ pic.twitter.com/mGuPiXXWtc 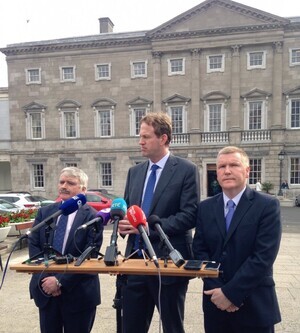 Fianna Fáil’s Jim O’Callaghan says the answers for these Garda scandals have not been given and want answers from Tanaiste… The party says it’ll consider options after hearing from Tanaiste today and Commissioner attends committee on Thursday.

.@solidarityie and @pb4p says it has a motion of no confidence in garda Commissioner @rtenews pic.twitter.com/s8tWNF2tbb

.@BrendanHowlin says @labour party will discuss tabling its own Dail motion re gardai at its meeting today @rtenews pic.twitter.com/hVcwMLjtNw

Leaders’ Questions begin at 2pm and can be watched live here 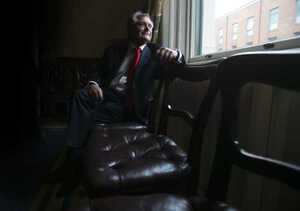 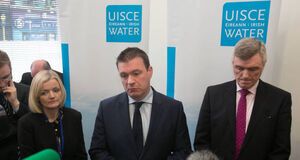 It’s all free water under the bridge.

“We were under the cosh to build a huge utility like Irish Water. To get a national metering programme in place and charge for water in the space of three years, which we just should have said no to. I’m sorry we didn’t.

“Within Government, we certainly had that battle with Fine Gael. At a critical point, the decision we made was to stick with it as opposed to pulling down the Government at that stage.

“Because we were afraid of the consequences for our country if we pulled the Government down. But we paid too high a price for that and we should certainly have stood our ground in relation to Irish Water.

“This was one of the things we had to make progress on. Because they were signing off monthly on the paycheck for the nation, in order for us to pay pensions and pay the cost of wages and so on.

“Under normal circumstances, that should have been a ten year project. I certainly think it was handled badly.”

Minister for Public Expenditure Brendan Howlin has said that there cannot be a situation where people decide to not pay their water bill.

It follows on from Environment Minister Alan Kelly’s comments on Monday night, in which he refused to rule out measures that could mean unpaid charges are recouped from peoples’ wages and social welfare payments.

“There can’t be a situation where anyone of us decide not to pay our bills. If you come to a supermarket checkout and decide “Nah, I’m not paying the bill” and walk off – that’s just not the way the system works.” 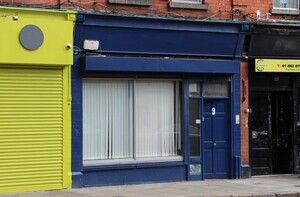 You may recall how Ellen Coyne and Catherine Sanz, of The Times Ireland Edition, went undercover at an ‘abortion advice’ centre in Berkeley Street, Inns Quay, Dublin 7.

Last month, they reported how a woman working at the clinic, who claimed to be a counsellor, told Ms Sanz that when a pregnancy ended unexpectedly a woman’s reproductive system could be damaged and that it could cause breast cancer.

Ms Sanz was also told that abortion could lead to women abusing their children in the future.

Unregulated crisis pregnancy agencies will be made illegal under a new bill proposed in response to an undercover investigation by The Times.

Brendan Howlin, the Labour leader, is hoping to pass the “much-needed” legislation as soon as possible after a clinic run by a Catholic group was exposed claiming that abortions could cause breast cancer and turn women into child abusers.

The bill, introduced to the Dail yesterday, would amend the Health and Social Care Professionals Act to add crisis pregnancy counsellors to the list of health professions regulated by the state. The move would make them subject to checks and any complaints against them would be examined.

… The [Women’s Centre on Berkeley Street] centre is linked to the Good Counsel Network, a Catholic anti-abortion group that holds protests outside clinics in Britain and has defended the Magdalene laundries. It is also connected to a man who was found in a 1999 High Court case to have used a similar clinic to illegally adopt a baby from a woman who had been talked out of an abortion. 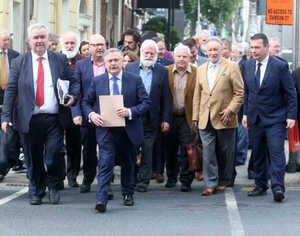 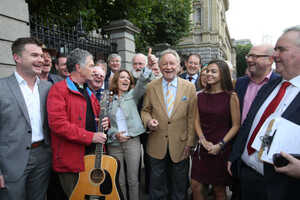 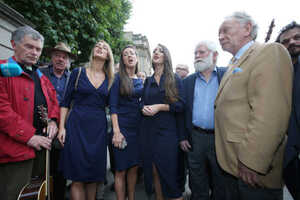 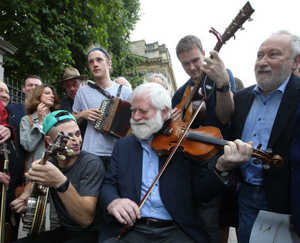 Hozier on the hour every hour so.