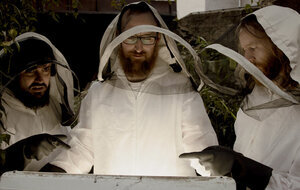 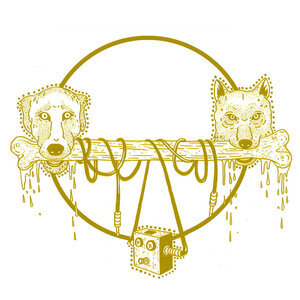 Behold, twenty-one tracks of homegrown noisemaking past, present and future, accompanied by artwork from New York-resident Limrocker Shane Harrington, and includes YMLT featurees CHANCER, Yonen, and Ganglions, as well as veterans like And So I Watch You From Afar, Ten Past Seven, The Redneck Manifesto. Also bundled in are contributions from defunct outfits like the sadly-missed Adebisi Shank.

More info and other compilations are available from the site, including a world-map of math-rock. 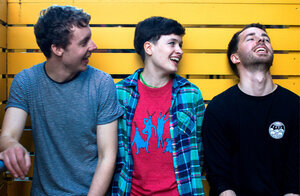 Ganglions – math-pop-punk with a Cork accent via Sheffield

01. Based in Sheffield, but sporting a pronounced Cork accent via vocalist Eimear O’Donovan, as well as drummery from Clonakilty man Brian Scally, Ganglions’ crossovers of pop, punk and math-rock make for a busy noise.

02. Eagle-eyed Irish music observers may remember O’Donovan from her time with Cork pop band KVX, and her memorable contributions to Bantum’s first album, on singles Oh My Days, and alongside Owensie on Roll Pt. 2.

03. Streaming above is the band’s self-released debut E.P., FETCH!, put out in February of last year and available for streaming and download.

04. The band plays Quarter Block Party, on the first weekend of February. Time and venue to be confirmed on release of the festival’s brochure. This follows their Irish debut at Cork’s Fred Zeppelin’s in December, in support of Terriers.

01. Absorbing elements of experimental, funk, hip-hop, house and math-rock into itself like some sort of beast are Cork folk ooSe.

02. Somehow encompassing all of this into a three-piece, the band first emerged in August of last year, releasing three-track E.P. Ephem.

03. Streaming above is an excerpt from the band’s show at the Triskel Arts Centre, this past September, a taster of their depth in the live field.

04. Gigging next on the 23rd of December, returning to the Triskel, with support from Donal Dineen on the decks, and visuals from Isaac Stillwell.

01. Math-punk three-piece We Come in Pieces have traipsed around the continent a few times over the course of their six years of existence.

02. Garnering attention for 2010’s full length Before the Chains and steadily touring for 2012’s Land of the Living, the band has been back in studio, finishing their third full-length.

03. Streaming above is the video for 2012’s single release, Sexy Rouge.

04. Catch them tonight in Limerick, in their last gig of the year, with local lads Cruiser and Cassavetes in support. Dolan’s, 9pm.

Verdict: A staple component of Limerick music at this point, this upcoming record of theirs ought to be a treat.

We Come in Pieces