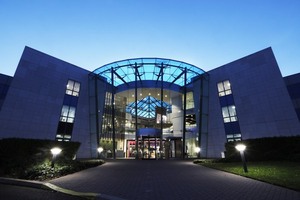 Microsoft announced the creation of 200 engineering roles as it unveiled a new €27m Engineering Hub, including an area called The Garage (above)…

…a space where Microsoft employees, as well as external partners such as customers, academics and students, will be encouraged to come to innovate, experiment and create, as well as fail.

As well as a large collaboration space, it also includes a maker space with cutting edge equipment like 3D printers, laser cutters and a milling machine.

Microsoft has ten other Garages in the US, Canada, Israel, India and China, but this is the first to be developed in Europe.

Boost as Microsoft to create 200 jobs in Dublin (RTÉ) Following queries, The Oireachtas have confirmed that the software used to display the results of today’s Seanad election count was developed in 1993 and has “worked perfectly” in every election since then, adding that it also “works on Windows 10” Taoiseach Leo Varadkar at the opening of Microsoft Ireland’s campus, One Microsoft Place

Ugly on the outside. Got it working. You have to change your Language Settings to English (US)! In case you missed it, Windows 93 is an eye-melting, surreal online version of a non-existent MS operating system by Jankenpopp and Zombectro that’s well worth exploring.

Boot it up here. A victory for the game consumer?

Was it  John Gallen’s post on Broadsheet, that tipped the balance, I wonder? Microsoft rapidly back pedals on game ownership on the new X Box One release. Now all they have to do is sort out the bag of sh*te that is Windows 8.

Xbox One reversal: did Microsoft make the right decision? (Guardian) Last week, Microsoft announced that it had finished migrating all 300 million active Hotmail accounts to the new Outlook Mail platform.